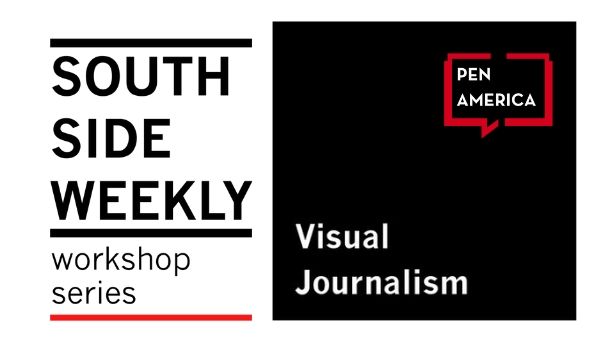 PEN America is thrilled to continue a partnership with the South Side Weekly in offering a series of hands-on journalism skills workshops this summer and fall. In this workshop, presenters will take participants through the steps of creating meaningful photography projects. This workshop will cover a range of topics from photography basics, including how to compose an image to more advanced topics like how to build a visual narrative and ethical approaches to visual storytelling. Attendees are encouraged to bring an idea for a photography project you’d like to workshop.

Sebastían Hidalgo is an award-winning photojournalist and digital producer who uses photography to engage and explore many social and humanitarian issues affecting communities of color. He is also an educator and host of a bi-weekly editorial support group for freelance visual journalists. Hidalgo has covered a range of stories including the social effects of gentrification in Mexican-American communities, poverty in American suburbs, Donald Trump’s “zero tolerance” pilot program, and discrimination in the criminal justice system. He approaches every story and person with a sense of delicacy and vulnerability that respects the subject’s humanity. He believes in the power of growing in conjunction with the people who are in front of the camera, as a witness, a bridge and, in some cases, as a collaborator. Today, Hidalgo frequently moderates public discussions about gentrification and developing a photographic vocabulary in Photojournalism. As a member of DiversifyPhoto, he was named among 12 Emerging Photographers You Should Know by The New York Times and continues to freelance in Chicago and throughout the Midwest.

Pat Nabong is a Chicago-based visual journalist who is dedicated to challenging stereotypes and bridging gaps through visual storytelling. Through photos and videos, she explores the intersections of culture, identity, and social justice issues. She is currently a Gwen Ifill Fellow with the International Women’s Media Foundation. Her work has appeared on Chicago Magazine, Chicago Reader, Narratively, and Rappler, among others. She completed fellowships with City Bureau, The Medill Justice Project, and the Pulitzer Center. She has received awards including a Harrington Award for Videography and a Crystal Pillar from the National Academy of Television Arts and Sciences – Chicago/Midwest Chapter. She earned her master’s in journalism at Northwestern University and is a member of the Authority Collective.

More information on additional workshops can be found here.

We at Kundiman believe that Pride should extend beyond a single month and want to offer this curated list of 20 Books by Queer Asian American Writers to highlight queer writing throughout the year! 🌈 Click the link below for the list:

The Russian artistic community has voiced criticism about the politically- motivated criminal proceedings against historian Yury Dmitriev, with the prosecutor requesting a 15-year sentence. Listen to the Russian actor Konstantin Raikin's statement: https://youtu.be/Gq55ycsHnGg.

Poland's down-to-the-wire presidential election is turning into a media bloodbath, with accusations of foreign interference and press bias as the campaign enters the final stretch before Sunday's runoff vote. https://politi.co/3gUhzO3