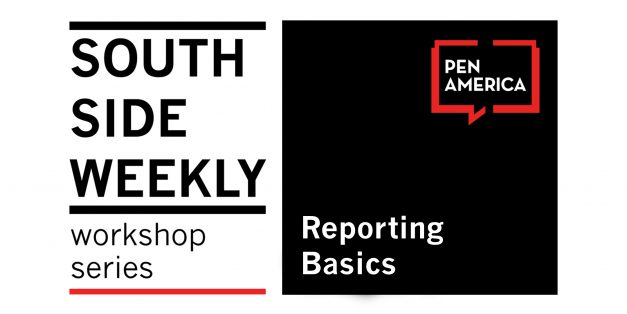 PEN America is partnering with the South Side Weekly on a series of eight hands-on workshops for different journalism skills. How to you get the information you need for a good story? Learn from an experienced reporter about seeking out sources, conducting effective interviews, and doing research.

Adeshina Emmanuel is a Chicago journalist whose work focuses on race, class, and inequity. He’s currently a reporter for Chalkbeat Chicago, where he helps tell the complex story of education in Chicago. Before joining Chalkbeat in May, Adeshina spent two years freelancing for local and national news outlets, including Chicago magazine, In These Times, Ebony, The Chicago Reader, The Columbia Journalism Review, and The New York Times. He also led in-depth reporting projects through City Bureau, a Chicago civic journalism lab. Adeshina has previously held staff positions at the Chicago Reporter, Dnainfo Chicago, The Chicago Sun-Times, and interned at The New York Times in 2012.