[VIRTUAL] Sounding the Alarm: The Free Speech Crackdown in Belarus 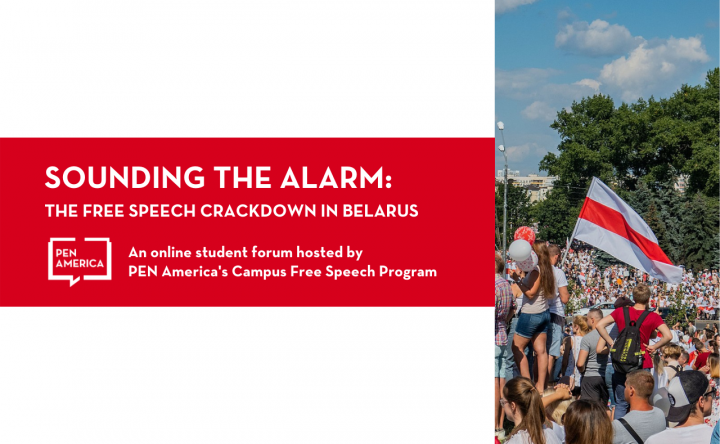 The relentless attacks against protesters, journalists, bloggers, artists, and cultural figures in response to Belarus’s presidential election on August 9 have alarmed the human rights advocacy community throughout Europe and beyond. Belarusian security services have brutally responded to peaceful protests by arresting and allegedly torturing many demonstrators and journalists across the country while also orchestrating several internet shutdowns. This crackdown has demonstrated the very reasons why so many citizens are desperate for a restoration of their free expression rights, and why PEN America has publicly urged the Belarusian government to cease its aggressive targeting of peaceful demonstrators and the media. Most recently, PEN America has been alarmed by the arrests of PEN Belarus members and employees including secretary, poet, and translator Hanna Komar; project manager, poet, and translator Uladzimir Liankevich; and translator Siarzh Miadzvedzeu.

Polina Sadovskaya  joined the PEN America team in 2016 as the first Free Expression Programs coordinator for Eurasia. She came to New York from Paris, where she was with UNESCO’s Division of Freedom of Expression and Media Development. She organized various international and global forums, and managed a project empowering local communities in Africa with radio and new digital technologies. She is an active supporter of women’s and youth’s rights around the world, and is a member of the IFEX Council. Prior to joining PEN America, Sadovskaya worked for Habitat Pro Association, an NGO advocating for the rights of indigenous peoples in Peru, particularly those of indigenous women and youth. She was also a radio correspondent and a marketing and communications manager with a major bank in her native Russia. She is fluent in Russian, French, and English, and has degrees in marketing from Grenoble Graduate School of Business and in journalism from South Ural State University.

Through her lawyer, Maria Kolesnikova said she was forced into a van and told that if she did not leave willingly she would be removed "alive or in bits." She is now seeking a criminal case against Belarusian security forces. https://bbc.in/33a6WkA

Chinese authorities have told major media outlets not to cover Walt Disney Co’s release of “Mulan,” following the controversy that erupted overseas over the film’s links with the Xinjiang region. https://reut.rs/35qut3E

The Supreme Court of India recently convicted a prominent lawyer for contempt of court for his tweets criticizing the judiciary, renewing a debate on free speech in the country's legal community. https://bit.ly/3mdAkPY