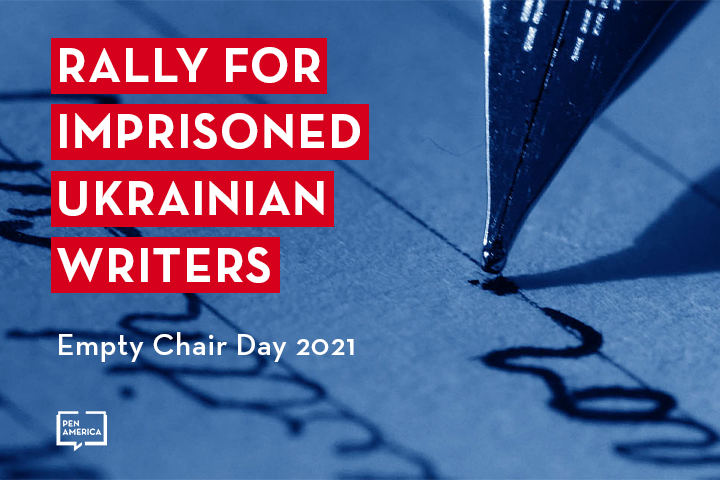 On Monday, November 15 at 4pm ET, PEN America will hold an “Empty Chair” street action outside of the Russian Consulate in New York City in support of Ukrainian journalists imprisoned for their writing and speech on the occupied territories of Eastern Ukraine and Crimea. American writers and journalists together with Ukrainian colleagues will read out the words of Ukrainian hostages for which many have been targeted. The action will be part of a series of events held by PEN America to mark the Day of the Imprisoned Writer. The Empty Chair Action is a longstanding tradition of presenting an empty chair to symbolize and honor a writer who cannot be present because they have been imprisoned, detained, disappeared, threatened, or killed.

This year’s action will feature Stanislav Aseyev, an award-winning Ukrainian journalist held hostage for his reporting on Eastern Ukraine. He was the focus of PEN America’s last “Day of the Empty Chair” and now joins the action to show solidarity with his colleagues who remain illegally detained and imprisoned for their work.

Organized in partnership with the Media Initiative for Human Rights, PEN Ukraine, Razom, and the Ukrainian Helsinki Human Rights Union.

Stanislav Aseyev, a Ukrainian novelist and journalist, was born in Donetsk, Ukraine in 1989 and has spent most of his life there. In 2014, after Russia-backed fighters occupied the city, he stayed in Donetsk to report on the developments in the region under pen name Stanislav Vasin. His reports have been published by Ukrayinska Pravda, Mirror Weekly, and Radio Liberty.

In 2017, Aseyev was kidnapped by militants and spent 962 days in isolation. After being repeatedly tortured, Aseyev confessed to acting as a Ukrainian spy. Charged with six articles seen by the so-called court as “extremism activities,” he spent a considerable part of his illegal sentence in Izolyatsia, a former factory that had been revitalized to serve as an art center between 2010 and 2014.

Aseyev was freed as part of a bilateral release of prisoners between Ukraine and Russia in 2019. For his journalistic work in the conflict zone and reporting on war crimes, Aseyev was awarded the Norwegian Free Media Award in 2020, the National Prize for the Defense of Freedom of Expression in Ukraine in 2020, and the Shevchenko National Prize in 2021.

Ann Cooper is an award-winning journalist and foreign correspondent with more than 25 years of radio and print reporting experience. She also worked eight years as executive director of the Committee to Protect Journalists, a press freedom advocacy group, prior to joining the Columbia faculty.

Cooper’s voice was well known to National Public Radio listeners as NPR’s first Moscow bureau chief, covering the tumultuous events of the final five years of Soviet communism. She co-edited a book, Russia at the Barricades, about a failed 1991 coup attempt, and she has continued to write about the glasnost era, the subsequent decline of press freedom in Russia, and Russia’s global media strategy.

Born and raised in Lviv, Maria Genkin works on a variety of projects in education and culture. Genkin has served on the board of the Joseph Brodsky Fellowship Fund and now serves on the board of Razom for Ukraine, a nonprofit with a mission to unlock the potential of Ukraine. Genkin co-founded and is now managing the Razom Book Club, a community of engaged readers of Ukrainian literature.

Julia Savko is the daughter of Olena Fedoruk, who was detained in the summer of 2017 by representatives of the Ministry of the State Security of the Donetsk People’s Republic. At first, Fedoruk was held in the Izolyatsia prison; later, she was charged with spying and convicted to 11 years of imprisonment. Currently, she is held in the penal colony №127 in the occupied territory (Snizhne, Donetsk region). Fedoruk has health issues as a result of spending more than four years in the inhumane conditions and forced labor in the colony. From time to time, Fedoruk’s family has spoken to her over the phone. However, since her detainment, her daughter has never had a chance to visit her mother. Representatives of international humanitarian organizations have also never been allowed to visit Fedoruk.

Polina Sadovskaya joined the PEN America team in 2016 as the first Free Expression Programs coordinator for Eurasia. She came to New York from Paris, where she was with UNESCO’s Division of Freedom of Expression and Media Development. She organized various international and global forums, and managed a project empowering local communities in Africa with radio and new digital technologies. She is an active supporter of women’s and youth’s rights around the world, and is a member of the IFEX Council. Prior to joining PEN America, Sadovskaya worked for Habitat Pro Association, an NGO advocating for the rights of indigenous peoples in Peru, particularly those of indigenous women and youth. She was also a radio correspondent and a marketing and communications manager with a major bank in her native Russia. She is fluent in Russian, French, and English, and has degrees in marketing from Grenoble Graduate School of Business and in journalism from South Ural State University.