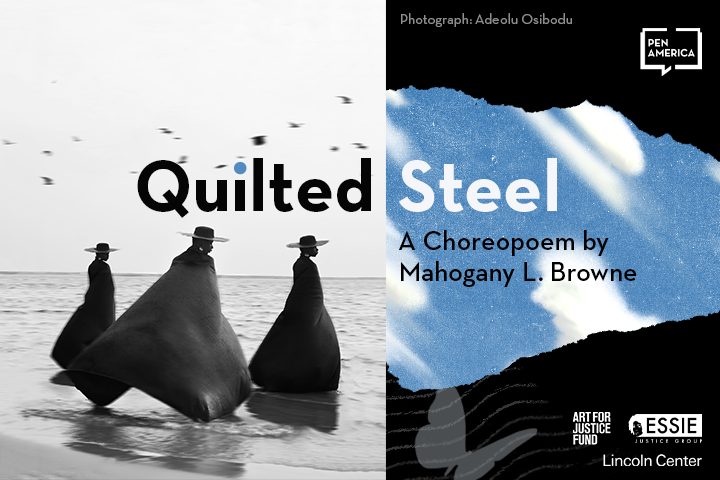 In the tradition of Ntozake Shange, Mahogany L. Browne’s choreopoem Quilted Steel is a literary event that brings the critical voices of system-impacted Black women to the stage.

Produced by Caits Meissner, director of Prison and Justice Writing at PEN America, this collaboration is a call to bear unflinching witness. Browne’s vision demands we look clear-eyed at the impact of mass incarceration on the lives of Black women in specific, and asks how we can honor and hold humanity of the individual at the forefront, while organizing towards systemic abolition.

Though the event is free (please RSVP below), we invite you to donate to Essie Justice Group’s Black Mama’s Bail Out movement in lieu of a ticket purchase. This past Mother’s Day, Essie bailed out a Black mama of four with a $50,000 bail and another Black mama with a $200,000 bail. Donate here.

Special thanks to the Art For Justice Fund for generous sponsorship of this project, and Dr. Self Tapes for video production. 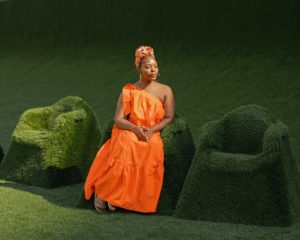 Mahogany L. Browne, selected as Kennedy Center’s Next 50, is the Executive Director of JustMedia, a media literacy initiative supporting the groundwork of criminal justice leaders and community members. This position is informed by her career as a writer, organizer, & educator. Browne has received fellowships from Art for Justice, Air Serenbe, Cave Canem, Poets House, Mellon Research & Rauschenberg. She is the author of recent works: Vinyl Moon, Chlorine Sky, Woke: A Young Poets Call to Justice, Woke Baby, & Black Girl Magic. As the founder of the diverse lit initiative, Woke Baby Book Fair. Browne’s latest project is a poetry collection responding to the impact of mass incarceration on women and children: I Remember Death By Its Proximity to What I Love (Haymarket Books). She is the first-ever poet-in-residence at the Lincoln Center and lives in Brooklyn, NY. 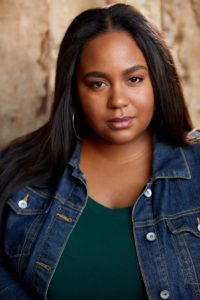 Jasmine Williams is an artist from South Central Los Angeles. She is the Executive Director of Da Poetry Lounge, an open mic venue in Los Angeles. She holds 13 years of organizing artistic residencies that provide equitable creative education to imprisoned and at-risk young adults with non-profit organizations such as Youth Speaks (SF), Say Word LA, B.R.I.D.G.E. Theatre Project, and most recently ArtworxLA. Her work has been featured on Facebook, TV One, HBO, Department of Cultural Affairs, & PBS to name a few. Jasmine creates art to inspire and amplify the voices of those brave enough to be heard. She loves mint chocolate chip ice cream, and on her time off she is a UNO champion and a VIP member of Twilight #TeamEdward, before falling asleep to episodes of Hey Arnold or The Office. 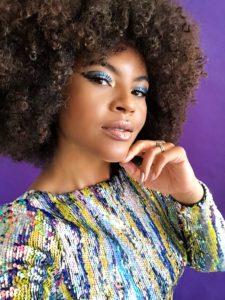 Yazmin Monet Watkins is a poet, comedian, writer, actress, educator and organizer. Touring her intimate yet political poetry from Obama’s White House to Johannesburg, and empowering students from Harvard to youth prisons, Watkins’ body of work weaves art and activism, exploring the intersection of race, gender, sexuality, self-love and all things Black Girl Magic. A Posse scholar and a graduate of Dickinson College, Watkins’ work combines art and activism, providing critical artistic outlets for audiences to self advocate and heal. Watkins has developed pilots with Netflix and Comedy Central alongside Paul Downs, Lucia Aniello and the all Black female comedy group, Obama’s Other Daughters. You can see their work on their Comedy Central show and their Shondaland podcast You Down? Watkins serves as the co-chair of the Arts & Culture committee for Black Lives Matter Los Angeles. Once Beyoncé said she liked her hair. 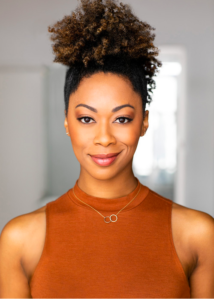 Dominique Toney is an actress, singer, songwriter, model, & voice-over artist from Los Angeles. Her debut album “A Love Like Ours” was in the top 10 selling soul albums on Amazon during its debut month, with 3 singles garnering radio airplay across the US. You can catch her as a series regular on the Apple TV+ show “Puppy Place,” as well as guest spots on “Crazy Ex-Girlfriend,” “Supergirl,” and “Why Women Kill” starring Lucy Liu. Besides her passion for acting and music, Dominique is an avid theatre-goer, pottery enthusiast, dessert connoisseur, and proud New York University Alum. www.dominiquetoney.com 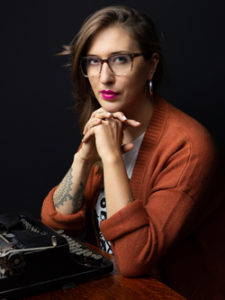 Caits Meissner is the director of Prison and Justice Writing at PEN America where she edited The Sentences That Create Us: Crafting A Writer’s Life in Prison (Haymarket Books, January 2022), of which the Mellon Foundation funded 75,000 copies to reach readers in United States prisons free of charge. She has taught, consulted, and co-created extensively for over 15 years across a wide spectrum of communities with a focus on prisons, public schools, and college classrooms at The New School and The City College of New York. In 2017, Meissner reenvisioned the concept of book tour for her illustrated poetry collection Let It Die Hungry, pairing public speaking engagements with opportunities to work with incarcerated writers across the United States. Meissner’s poems, comics, essays and curation have appeared in The Creative Independent, The Rumpus, [PANK], Harper’s Bazaar, Adroit, Literary Hub, Split This Rock, Bust Magazine, The Normal School, Hobart, and The Guardian, among others. 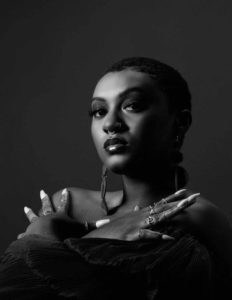 Amare Symoné is a multidisciplinary artist and creative from Brooklyn, NY. 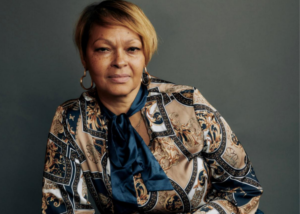 Donna Hylton is an activist and author of her 2018 memoir, “A Little Piece of Light,” which documents her journey from being human trafficked as a child into an illegal adoption from Jamaica to the United States into nearly three decades of incarceration. It is this complex experience that Ms. Hylton draws upon in her direct work with women and girls through A Little Piece of Light, (APOL), the 501 (c) 3 organization she founded and directs. Ms. Hylton’s advocacy includes contributing to  legislation that seeks to reverse injustice and improve the lives of impacted people. She sits on the Brooklyn Bail Fund Board of Directors and is a member of the Advisory Board for Sankofa. A featured speaker at the Women’s Marches in 2017 and 2020, Ms. Hylton is a founding member of The National Council for incarcerated and Formerly Incarcerated Women and Girls and an alumna of the first cohort of Leading with Conviction Fellows of JustLeadership USA. She is also a recipient of the Ann Atwater Icon Award and the first Social Justice Scholar in Residence at Philander Smith College. 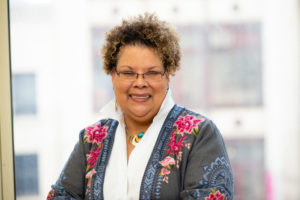 Vivian D. Nixon is Writer in Residence at The Square One Project. From 2001 through 2021, Ms. Nixon was a nonprofit leader helping women rebuild disrupted lives through education.  A strong believer in lifetime learning, she examines structural racism in society through many lenses. Driven by personal experience with incarceration and a desire to advance transformational justice, Ms. Nixon writes across genres.  She earned an MFA from Columbia School of the Arts and holds an Honorary Doctorate of Humane Letters from Bard College. She is thankful for opportunities that have been integral to her growth as a writer and critical thinker. These include support from the Ford Foundation and Art for Justice Fund as well  as The John Jay Medal for Justice and Fellowships from Aspen Institute Ascend, Open Society Foundations, and PEN America.  Ms. Nixon’s essays and poems appear in journals, books, magazine’s and opinion pages. She co-edited What We Know: Solutions from Inside the Justice System, The New Press, May 2020. 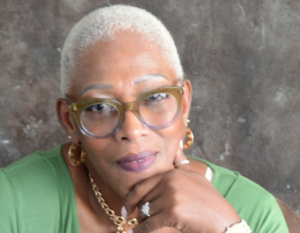 Dr. Vanda Seward is currently the Director of Criminal Justice Program and Professor at the City University of New York, Kingsborough Community College, Radio Host for Visions and Solutions: Criminal Justice Brief on WKRB radio in New York (On Pause due to Covid). Dr. Seward is retired from the Kings (Brooklyn) County District Attorney’s Office where she was appointed by New York State Division of Criminal Justice Services to head the Brooklyn County Reentry Task Force.  Prior to accepting her position at the District Attorney’s Office she was appointed by then Governor David Paterson as the Statewide Director of Reentry Services for New York State Department of Corrections and Community Supervision (Parole). She is the former Executive Director of the Kings County District Attorney’s Office ComALERT program which is the first full service reentry program run under the guidance of a prosecutors’ office. Dr. Seward has been serving “high risk” populations that are criminal justice involved for well over 35 years. Dr. Seward is a strong and active advocate for criminal justice reform. In addition to several publications, she has received many rewards and accolades for her work within the criminal justice arena. 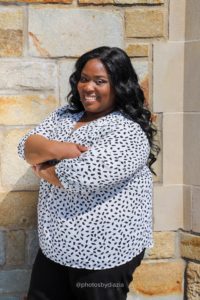 Heather Stokes is a Connecticut-based writer whose experiences as both a black woman and a convicted felon have fueled her passion to bring healing and health into BIPOC communities throughout her state and the country. In addition to her full-time job, Heather is a doula with Earth’s Natural Touch, the largest Black-owned doula organization in the North East.  Her goal is to serve women who are planning to give their children up for adoption and women who will be giving birth while incarcerated. As a felon, she recognizes the need for a healing community for these women. When she is not plotting to save the world one BIPOC community at a time, she takes care of her niece & sister. They, along with her colorful life experiences, provide the background for her writing. 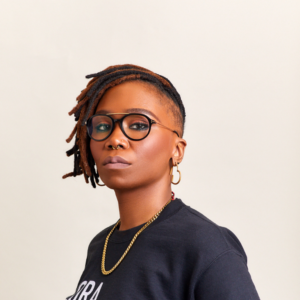 Nicole Shawan Junior (they/them) is an arts administrator, community builder and justice-involved counter-storyteller, currently serving as deputy director of Prison and Justice Writing at PEN America. Prior to joining PEN America, they founded Roots. Wounds. Words.—an organization that provides BIPOC-led and -centered literary arts pedagogy, publication and performance opportunities. They also prosecuted police and domestic violence cases. Nicole’s writing appears in The Sentences That Create Us, Guernica, The Rumpus, The Feminist Wire, ZORA, Gay Mag, SLICE and elsewhere. They have received residencies and fellowships for their writing from Hedgebrook, Tin House, PERIPLUS, NYFA, Lambda Literary, and many more. They served as editor-in-chief of Black Femme Collective and on the editorial teams at Women’s Studies Quarterly of the Feminist Press and SLICE Magazine. Nicole curated a limited column that centered first-person narratives written by justice-involved mothers for Raising Mothers and guest-edited at The Rumpus. When not reading, writing or creating literary arts opportunities, Nicole’s listening to Jay Z, pulling a tarot card, or flipping a large tire at a local Strongman gym.

Every Mother’s Day since 2017, Essie Justice Group has been on the frontlines of bailouts in partnership with National Bail Out to free Black Mamas in California and welcome them into Essie’s Sisterhood—a loving and powerful community of women with incarcerated loved ones. This year was no different. We always come for ours! Over the last five years, Essie has paid over $1.9 million to buy back the freedom of Black Mamas. 1 in 4 women, and 1 in 2 Black women, have an incarcerated loved one. In the absence of substantial care systems in communities, Essie Sisters and other women with incarcerated loved ones across the country continue to act as the care, support, and reentry system all on their own. At Essie, that looks like connecting our Black Mamas to our loving and comprehensive network of support including housing, food, therapy, clothing, court support, transportation, child reunification, and community. Women with incarcerated loved ones are the blueprint for what care first, jails never, looks like!

Donate to Essie Justice Group in lieu of a ticket for this free event: essiejusticegroup.org/donate