Political Correctness, Inclusion, and the Battle over Campus Speech 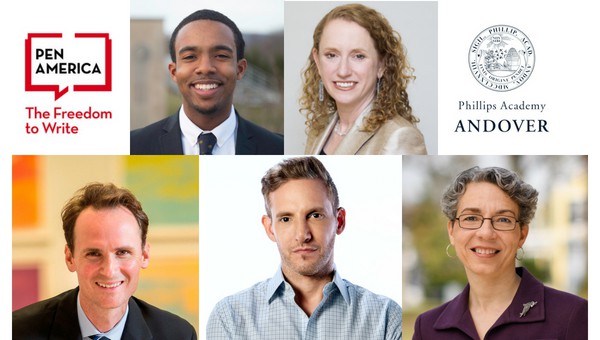 In an era of trigger warnings, ​safe spaces, and rescinded invitations, and with hate speech on the rise nationwide, are free speech and inclusion at odds? Join ​PEN America ​and Phillips Academy Andover for a lively discussion about how schools, colleges, and universities can advance inclusion while protecting free speech. ​

We are deeply grateful to Tara Peterson for her generous support of this event.

Jason Bellini is a reporter, senior video producer, and host of a video series at The Wall Street Journal. Earlier this year, an episode of his series took an in-depth look at the campus free speech controversy. Before joining WSJ, he was a specials producer at CNBC, a Singapore-based correspondent for Bloomberg News, and a field correspondent for CNN—where his assignments included covering the war in Iraq as an embedded reporter. He graduated from Georgetown University.

Jermel McClure, Jr. is a recent graduate of Binghamton University where he majored in political science. McClure recently completed his tenure as the president and CEO of the Student Association at Binghamton University, a $2.5 million nonprofit corporation run entirely by students. In July he will be joining JP Morgan’s Private Bank as a private banking analyst.

Michele Minter is vice provost for institutional equity and diversity at Princeton University, where she oversees the University’s initiatives focused on diversity, inclusion, and access for all populations and serves as chief compliance officer for Title VI, Title IX, and the ADA. Prior to assuming her current role in 2011, she led fundraising and strategic initiatives focused on policy and college access at the College Board. Minter writes on higher education, diversity, and philanthropy for such outlets as Inside Higher Ed and Diverse Issues in Higher Education. She is the co-editor of From Donor to Philanthropist (2013). She is a graduate of Yale University and the City University of New York.

John Palfrey is the head of school at Phillips Academy in Andover, Massachusetts. Prior to joining the Andover community in July 2012, John worked as a professor and vice dean at Harvard Law School and served as executive director of the Berkman Klein Center for Internet & Society. He has published extensively on how young people are learning in a digital era, as well as the effect of new technologies on society at large. Outside of his work at Andover, John chairs the board of the John S. and James L. Knight Foundation and the board of LRNG. He also serves on the boards of the Berkman Klein Center and School Year Abroad. John is the author or coauthor of nine books, including Safe Spaces, Brave Spaces (2017); Born Digital (2016, with Urs Gasser); and BiblioTech (2015). He holds a J.D. from Harvard Law School, an M.Phil. from the University of Cambridge, and an A.B. from Harvard College.

Suzanne Nossel is chief executive officer at PEN America. Since joining the organization in 2013, she has overseen a doubling of the organization’s staff and budget and the strengthening and expansion of membership, research and advocacy, and public programs. Prior to joining PEN America, she served as the chief operating officer of Human Rights Watch and as executive director of Amnesty International USA. She has served in the Obama Administration as Deputy Assistant Secretary of State for International Organizations and in the Clinton Administration as Deputy to the U.S. Ambassador for UN Management and Reform. Nossel coined the term “Smart Power,” which was the title of a 2004 article she published in Foreign Affairs Magazine and later became the theme of Secretary of State Hillary Clinton’s tenure in office. She is a featured columnist for Foreign Policy magazine and has published op-eds in The New York Times, Washington Post, and LA Times, as well as scholarly articles in Foreign Affairs, Dissent, and Democracy, among others. Nossel serves on the Board of Directors of the Tides Foundation. She is a magna cum laude graduate of both Harvard College and Harvard Law School.