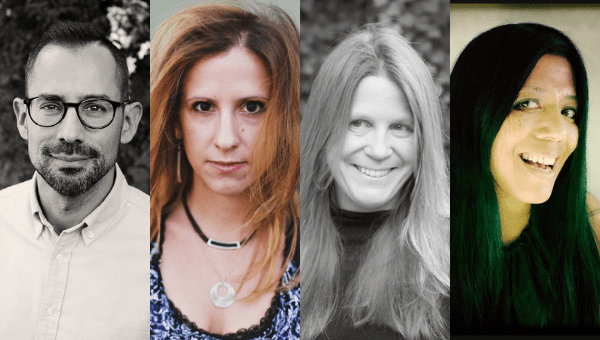 PEN West invites you to a Poetry Celebration co-sponsored with Left Margin LIT on April 13, 2019, from 3-5 pm. Poets Randall Mann, Katie Peterson, Brittany Perham, and Maw Shein Win will be reading from their work. We look forward to seeing you there!

Randall Mann is the author of four poetry collections, including Complaint in the Garden (2004), Breakfast with Thom Gunn (2009), Straight Razor (2009), and most recently, Proprietary, which was published in 2017. A book of criticism, The Illusion of Intimacy: On Poetry, was recently published by Diode Editions. Randy lives in San Francisco.

Since 2003, Katie Peterson is Associate Professor of English at the University of California at Davis, where she directs the Graduate Creative Writing Program. She has published four collections of poetry: This One Tree (2006), Permission (2013), The Accounts (2013), and A Piece of Good News, which was published this year by Farrar, Straus and Giroux. She is also the editor of the New Selected Poems of Robert Lowell (2017). Katie lives in Berkeley with her husband, the photographer Young Suh, and her daughter, Emily Louise Suh.

Brittany Perham is the author of Double Portrait (W.W. Norton, 2017), which received the Barnard Women Poets Prize and was nominated for a Northern California Book Award; The Curiosities (Free Verse Editions, 2012); and, with Kim Addonizio, the collaborative chapbook The Night Could Go in Either Direction (SHP, 2016). She teaches in the Creative Writing Program at Stanford University and lives in San Francisco.

Maw Shein Win is a poet, editor, and educator whose writing has appeared in many journals and anthologies, including MARY: A Journal of New Writing, Poetry International, and Cimarron Review. In 2016, Oakland’s Nomadic Press published her poetry chapbook, Score and Bone. A full-length collection, Invisible Gifts: Poems, was published by Manic D Press in 2018. Win is the first poet laureate of El Cerrito (2016–2018), and her forthcoming second full-length collection of poetry will be published by Omnidawn in 2020. She is currently a Visiting Scholar in the English Department at UC Berkeley.