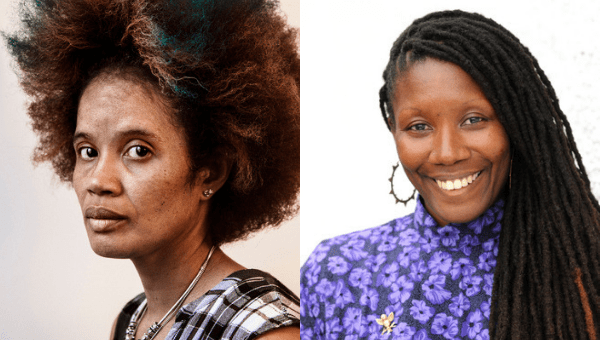 Check out our other PEN Out Loud events with:
Salman Rushdie and Marlon James »
Rion Amilcar Scott and Vinson Cunningham »
Lindy West and Hari Kondabolu »

Poet and performer Staceyann Chin joins PEN Out Loud to celebrate her unflinching, activist-driven poetry, collected for the first time in Crossfire: A Litany for Survival. This event will feature a performance of her work, and a conversation with author Nicole Dennis-Benn on craft and the intersections between poetry and advocacy.

Poet, actor, and performing artist Staceyann Chin is the author of the critically acclaimed memoir The Other Side of Paradise, co-writer and original performer in the Tony Award–winning Russell Simmons Def Poetry Jam on Broadway, and author of the one-woman shows Hands Afire, Unspeakable Things, Border/Clash, and MotherStruck. She has appeared on the Oprah Winfrey Show and 60 Minutes, and her poetry been featured in The New York Times and Washington Post. She proudly identifies as Caribbean, Black, Asian, lesbian, a woman, and a resident of New York City, as well as a Jamaican national.

Nicole Dennis-Benn is the author of Here Comes the Sun, a New York Times Notable Book and winner of the Lambda Literary Award. Her bestselling, sophomore novel, PATSY, has received much acclaim from the New York Times, O Magazine, TIME, NPR, Vogue, The Atlantic, the Washington Post, and others. PATSY has been selected as a New York Times Editors’ Choice, a Financial Times Critics’ Choice, a Today Show Read With Jenna Book Club pick, and has also been deemed by Apple Books as one of the Best Books of the Year so far. As a Jamaican-born and raised author, Time Out New York has described Dennis-Benn as one of the “few immigrants and first-generation Americans who are putting their stamps on NYC,” and Vice has lauded Dennis-Benn for “making American literature great again.” Dennis-Benn is the founder of the Stuyvesant Writing Workshop and lives with her wife in Brooklyn. Her website is http://www.nicoledennisbenn.com.