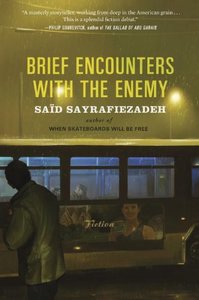 Join PEN Member Saïd Sayrafiezadeh at one of downtown Manhattan’s best indy book shops as he reads from his new collection of short stories, Brief Encounters with the Enemy, just published by Dial Press. The reading, co-sponsored by PEN American Center, will be followed by a Q&A with fellow PEN Member Sam Lipsyte and a book signing and reception.

Saïd Sayrafiezadeh was born in Brooklyn and raised in Pittsburgh. He is the author of a memoir, When Skateboards Will Be Free. His writing has appeared in The New Yorker, The Paris Review, Granta, McSweeney’s, The New York Times Magazine, and The Best American Nonrequired Reading, among other publications. He lives in New York City and teaches at New York University.

Sam Lipsyte was born in New York City and raised in Closter, New Jersey. He is the author of the short story collection Venus Drive as well as three novels: Home Land, The Ask, and The Subject Steve. A former editor at the webzine FEED, his work has appeared The Quarterly, The New Yorker, Tin House, Slate, and The Paris Review, among others. In 2008, he was awarded a Guggenheim Fellowship. He currently lives in New York City, where he teaches at Columbia University.