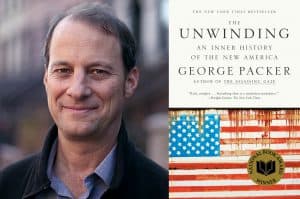 You are invited to a private dinner with writer George Packer.

The dinner will be hosted by John and Louisa Troubh at their home in Midtown on Wednesday, February 22nd, 2017 at 7:30pm.

George will discuss his book The Unwinding: An Inner History of the New America. Combining novelistic storytelling and rigorous reporting, he exposes tattering seams in the national tapestry. In an account of economic decline that traverses large cities and small towns, George Packer casts a discerning eye on banks and Wall Street while tracing the painful dissolution of much of our economic infrastructure. His compelling profiles of struggling, ordinary workers, amid snapshots of wealthy, ambitious, and even notorious celebrities, dramatize the widening gulf between rich Americans and everybody else.

Praise for Unwinding: “It’s possible that the book that best explains the America that elected Donald J. Trump appeared more than three years ago. In The Unwinding, George Packer took a wide-angled look at this country’s institutions and mores and was appalled by what he found. His book hums with sorrow, outrage and compassion.” —The New York Times

George Packer is a staff writer for The New Yorker and the author of The Assassins’ Gate: America in Iraq, which received several prizes and was named one of the ten best books of 2005 by The New York Times Book Review. He is also the author of two novels, The Half Man and Central Square, and two other works of nonfiction, Blood of the Liberals, which won the 2001 Robert F. Kennedy Book Award, and The Village of Waiting. His play, “Betrayed,” ran off-Broadway for five months in 2008 and won the Lucille Lortel Award for Outstanding Play.