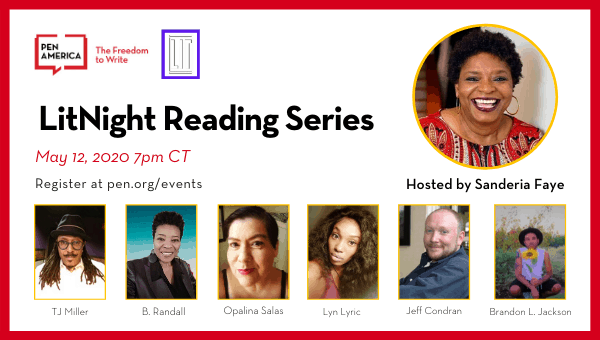 In partnership with LitNight, PEN America invites you to a public reading featuring established and emerging writers, on Tuesday, May 12, at 7pm Central time.

LitNight is a monthly reading series featuring some of the most exciting established and emerging writers to come out of Dallas, and the literary community at large. This month’s reading will feature short story writers Lyn Lyric and Jeff Condran, mystery writer TJ Miller, and poets B. Randall, Brandon L. Jackson, Opalina Salas. The event will be hosted by Sanderia Faye.

Sanderia Faye serves on the faculty at Southern Methodist University, and is a professional speaker, activist, and sommelier. Her novel, Mourner’s Bench, is the winner of the Hurston/Wright Legacy Award in debut fiction, the Philosophical Society of Texas Award of Merit for fiction, and the 2017 Arkansas Library Association’s Arkansiana Award. She is the host of LitNight Reading Series.

T.J. Miller writes novels under the moniker T. Jerome Miller. He is a singer, storyteller, and music executive. A native of Louisiana, Miller has traveled the country singing in a big band and a chamber choral. Soon after, Miller began his major label career with PolyGram Group Distribution, the distributor for iconic labels DefJam, Motown, Mercury, A&M, Island, and Verve. Miller went on to become an executive with Motown, Capitol, Warner Music Group, and SoBe Entertainment (a Universal Company). He is the author of the murder mystery novel Murder By The Collar.

Lyn Lyric is a singer, songwriter, poet, writer, and actress. In March 2015, Lyn Lyric released her long-awaited poetry and music CD entitled “Of Verse & Song” at The Black Academy of Arts and Letters. This versatile performer has landed roles in productions such as Love Doesn’t Hurt, Behind The Cotton Curtain (a tribute to Medgar Evers), The Black Nativity, The Book of Queens, and Just Call Him, to name a few. Lyn Lyric is a crowd favorite at The Black Academy of Arts And Letters Poet’s N Jazz, Poetry Smash, and the longest-running all-female poetry show in Texas: “In The Words Of A Sistah.”

Brandon L. Jackson is a black queer writer. A graduate of Sam Houston State University, he is the author of four poetry book collections; The Parts Medicine Can’t Reach Volumes 1 & 2, Somewhere Between Logic & Emotion, and From A Sky’s View. Jackson has traveled the states performing and has been a featured guest on the internet talk radio show “The Journey” hosted by Neville Deangelou. He has also been featured in the anthology Blues Arrival: Stories of the Queer Black South & Migration, performed in rallies for LGBT equality such as “RevLove,” and has had his words featured in the art exhibit called “Blues Talk: It Ain’t No Chit Chat Cliché” by visual artist/community activist Vicki Meek. Jackson has had reoccurring performances for The T.R.U.T.H. Project, led by Kevin Anderson, that provides artistic outlets for HIV awareness within the community.

Opalina Salas is a poet, a former bookstore owner, and creator and host of the “Poets on X+” reading series, held in her beloved home of Oak Cliff, TX. Her first collection of poetry, Black Sparrow Dress, reflects a lifetime of engagement and evolution as a poet and a person. She was an editor for the femme lit zine, Let It Bleed, and is a contributing poet on MadSwirl.com. Her poem, “<불확실성>,” was featured in “City of ______: Dispatches from 16 Dallas Poets.” She is also a host and co-conspirator for ATTACK OF THE POETS, an annual multi-day festival held in Oak Cliff, TX, hosting poets from around the United States, bridging the gaps between various literary communities far and wide.

B. Randall is the host of “Poetry Smash” and “Poets N’ Jazz” at The Black Academy of Arts and Letters. She also hosts “Verse & Rhythm” at the Oak Cliff Cultural Center. Randall is host/producer of “In The Words Of A Sistah,” the longest-running all-female cast poetry show of its kind. In 2012, Randall launched her first touring show, “Poetry Is My Praise,” an inspirational, motivational, and spiritual poetry show. Randall was commissioned by the Multicultural Alumni Association of Texas A&M—Commerce to pen a poem commemorating the 50th anniversary desegregation. Randall’s recorded work has been featured at 500X Gallery. She currently serves on the board of directors for WordSpace and has recently become a program director for Jazz Becuzz. Randall is the co-writer, producer, and director of A Poets Tribute to Nina.

Jeffrey Condran is the author of two story collections, A Fingerprint Repeated and Claire, Wading Into the Danube By Night. His debut novel, Prague Summer, received a 2015 Independent Publisher Book Award’s Silver Medal. His fiction has appeared in journals such as The Kenyon Review, The Missouri Review, and Epoch, and has been awarded the The Missouri Review’s 2010 William Peden Prize and Pushcart Prize nominations. He is an associate professor of creative writing at the University of Arkansas at Little Rock and co-founder/publisher of the independent literary press, Braddock Avenue Books.