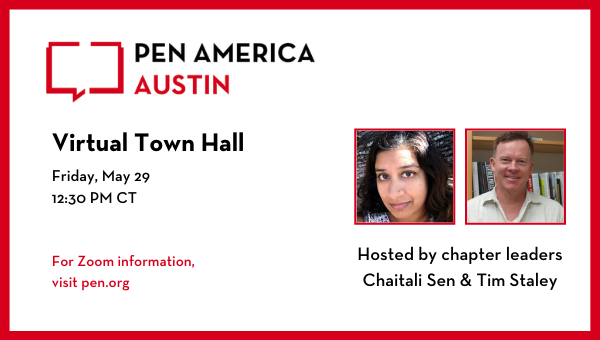 PEN America Austin invites you to a virtual town hall and reading to celebrate the chapter and discuss its future. PEN America Members and allies will come together in community with our chapter leaders, Chaitali Sen and Tim Staley.

If you are interested in meeting fellow PEN America Members and allies, as well as learning more about PEN America Austin and how to get involved, this will be your opportunity!

Chaitali Sen is the author of the novel, The Pathless Sky, published by Europa Editions in 2015. Her short stories, essays, and reviews have appeared in Ecotone, New England Review, Electric Literature, LitHub, The Texas Observer, Catapult, Shenandoah, Los Angeles Review of Books, and many other publications. She is a graduate of the Hunter College MFA program in fiction and founder of the interview series, “Borderless: Conversations in Art, Action, and Justice.”

Tim Staley lives in Austin, TX, where he is the executive director of the Austin Public Library Foundation, a nonprofit organization that supports the Austin Public Library and administers various literary programs including the New Fiction Confab, the Mayor’s Book Club, and Badgerdog creative writing workshops. Prior to the Library Foundation, he served as editor and director of development at the University of Texas Press for seven years. Staley graduated from Kenyon College.