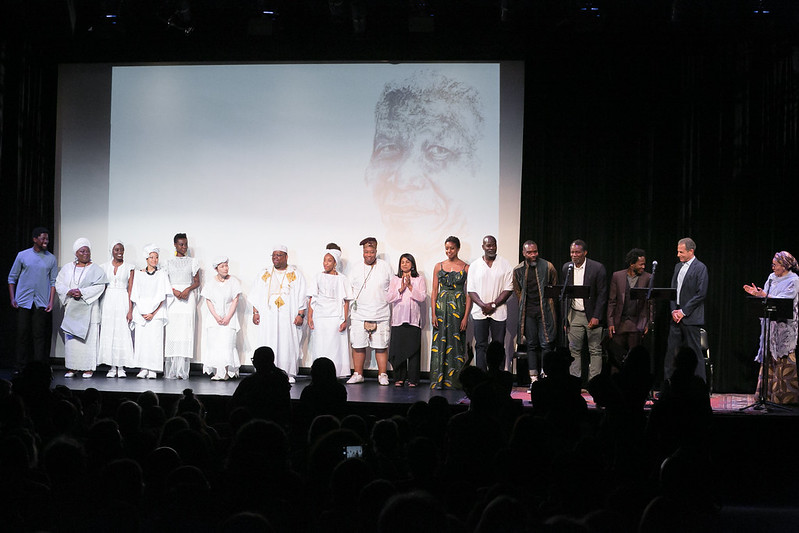 Nelson Mandela at 100 will feature readings from The Prison Letters of Nelson Mandela, along with performances, and reflections celebrating Nelson Mandela’s centennial birthday. Produced by PEN America in collaboration with Symphony Space and Liveright, and with events in Cape Town and London, this will be a truly global tribute to the anti-apartheid revolutionary in his own words and in words inspired by his life and work. With readings of Mandela’s letters from activists and authors Ishmael Beah and Darnell L. Moore, journalist Richard Stengel, along with actors Atandwa Kani, Condola Rashad, Hisham Tawfiq, John Douglas Thompson, and Rita Wolf, award-winning director Liesl Tommy, and a special musical performance from the New York African Chorus Ensemble.

Ishmael Beah born in Sierra Leone, West Africa, is the New York Times bestselling author of A Long Way Gone, Memoirs of a Boy Soldier and Radiance of Tomorrow, A Novel. His Memoir has been published in over 40 languages and was nominated for a Quill Award in the Best Debut Author category for 2007. Time Magazine named the book as one of the Top 10 Nonfiction books of 2007, ranking at number 3. His novel written with the gentle lyricism of a dream and the moral clarity of a fable is a powerful book about preserving what means the most to us, even in uncertain times. Already available in several foreign languages, the New York Times finds in his writing an “allegorical richness” and a “remarkable humanity to his [Beah’s] characters”. He is based in Los Angeles, California, with his wife and children.

Atandwa Kani portrayed young Nelson Mandela in the biopic Mandela: Long Walk to Freedom. His television credits include Life is Wild, Wild at Heart, 90 Plein Street, Kowethu, It’s Complicated, and the mini-series The Book of Negroes. He starred in the short film The Suit and most recently was featured in Black Panther. Kani is a member of the Fortune Cookie Theatre Company, and his stage credits include The Tempest with the Royal Shakespeare Company, Black & Blue, and Sizwe Banzi Is Dead.

Darnell L. Moore is the author of the memoir No Ashes in the Fire. He serves as editor-at-large for the digital publication Cassius, co-managing editor of The Feminist Wire and editor of The Feminist Wire Books series, writer-in-residence at the Center on African American Religion, Sexual Politics and Social Justice at Columbia University, and is co-founder of YOU Belong, an organization devoted to youth development. Moore also hosts Mic’s digital series The Movement, and his writing has been featured in Ebony, The Huffington Post, The Guardian, Guernica, Vice, Out Magazine, among other publications.

Richard Stengel is the former editor of TIME. He collaborated with Nelson Mandela on his bestselling 1993 autobiography, Long Walk to Freedom, and later served as coproducer of the 1996 Oscar-nominated documentary, Mandela. He is also the author of Mandela’s Way; and January Sun: One Day, Three Lives, a South African Town among others.

Condola Rashad is a four-time Tony Award nominee for her roles in the plays Stick Fly; The Trip to Bountiful; A Doll’s House, Part 2; and Saint Joan, following her breakout off-Broadway role in the Pulitzer Prize-winning play Ruined, for which she received the Theatre World Award for Best Debut Performance. She also starred in the 2013 revival of Romeo & Juliet on Broadway opposite Orlando Bloom. Film and television credits include The Good Wife, 30 Beats, Steel Magnolias, Smash, Money Monster, Bikini Moon, and Come Sunday, and she currently appears on television in Billions.

Hisham Tawfiq is best known for his series regular role as Dembe in the NBC hit series, The Blacklist, opposite James Spader. Most recently, the feature film Jinn, in which Tawfiq starred, premiered to great acclaim at the SXSW Film Festival. Other feature credits include Jeff Bailey’s Counterfeit, Dope Fiend, Dead Man Down, Notorious, and Five Minarets in New York. Television credits include Gun Hill with Larenz Tate, NBC’s Kings, as well as recurring roles on 30 Rock and both Law & Order: CI and Law & Order: SVU. Aside from being a professional actor, Tawfiq is a retired FDNY fireman and a former Marine.

John Douglas Thompson can currently be seen on Broadway in Carousel with Renee Fleming and Jessie Mueller. Thompson was nominated for a Tony Award for his performance in Jitney and has won an Obie, Lucille Lortel, Outer Critics Circle, Robert Brustein, and Calloway awards. Called “one of the most compelling stage actors of his generation” by The New York Times, Thompson’s stage credits include A Time To Kill, Cyrano De Bergerac, and Julius Caesar, among others. Television credits include The Immortal Life of Henrietta Lacks, Bull, Person of Interest, Madam Secretary, and Conviction, among others.

Rita Wolf most recently appeared in Hammaad Chaudhury’s debut play An Ordinary Muslim at The New York Theatre Workshop. She was nominated for a Drama Desk Award for her role in David Greig’s The American Pilot at the Manhattan Theatre Club. Additional theater credits include Hanif Kureishi’s Borderline at the Royal Court Theatre in London, David Hare’s Stuff Happens at the Public Theater; A.R. Gurney’s O, Jerusalem at The Flea Theatre; and Tony Kushner’s Homebody/Kabul at New York Theatre Workshop and Brooklyn Academy of Music. She has appeared in the films Majdhar, My Beautiful Laundrette, and Girl 6. Wolf is a founding member of the London-based Kali Theatre Company.

In collaboration with The New York Times.