[VIRTUAL] Miami Book Fair in Conversation: Queer Writing on Growing Up with the AIDS Crisis 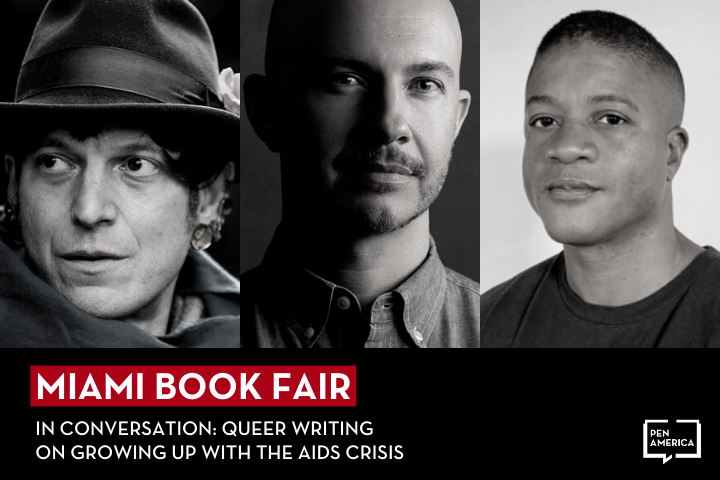 In collaboration with the 2021 Miami Book Fair, PEN Across America’s Program Director William Johnson moderates a vital discussion with authors Mattilda Bernstein Sycamore and Steven Reigns. This conversation covers the decades-old controversy regarding dentist and a reluctant symbol of the AIDS epidemic, David Acer. In poetry and prose, Steven Reigns’s A Quilt for David explores the story of David Acer, whose homosexuality and sickly appearance from AIDS-related illness made him the perfect scapegoat and a victim of mob mentality in his conservative, early 1990s-era Florida town.

In Between Certain Death and a Possible Future: Queer Writing on Growing Up with the AIDS Crisis, Mattilda Bernstein Sycamore’s wide-ranging collection of stories stems from a generation that came of age during the epidemic and had to confront the notion that desire led to death.

William Johnson is the PEN Across America program director at PEN America and in 2011 began his tenure at Lambda Literary, an organization dedicated to promoting LGBTQ literature. As the former deputy director of Lambda Literary, Johnson oversaw many of the organization’s most dynamic programs and public events, including the Writer’s Retreat for Emerging LGBTQ Voices and Lambda’s web magazine, the Lambda Literary Review. A longtime steward in the writing community, Johnson was also the editor and publisher of Mary Literary, a magazine committed to showcasing work of artistic integrity, and he co-produced Nepantla: A Journal Dedicated to Queer Poets of Color, the first major anthology for queer poets of color in the United States.

Mattilda Bernstein Sycamore is the author of two nonfiction titles and three novels, and the editor of five nonfiction anthologies. Her latest book, The Freezer Door, was a New York Times Editors’ Choice and a finalist for the PEN/Jean Stein Book Award. Her memoir, The End of San Francisco, won a Lambda Literary Award, and her novel Sketchtasy was one of NPR’s Best Books of 2018. Between Certain Death and a Possible Future: Queer Writing on Growing up with the AIDS Crisis (Arsenal Pulp Press), a wide-ranging collection of stories from a lost generation, brilliantly captures a collective redefining moment in our recent history. Every queer person lives with the trauma of AIDS, but today young people growing up with effective treatment and prevention are unable to comprehend the magnitude of the loss the epidemic wrought. The disease’s first generation, coming of age in the era of gay liberation and then watching entire circles of friends and lovers die of a mysterious illness, existed under the belief that desire intrinsically led to death—a notion many internalized as part of being queer. Through 36 personal essays on the ongoing and persistent impact of the HIV/AIDS crisis in queer lives, Bernstein Sycamore addresses the question: How do we reckon with the trauma that continues to this day, and imagine a way out?

Steven Reigns, a Los Angeles poet and educator, was appointed the first poet laureate of West Hollywood. He has published two previous collections, Inheritance and Your Dead Body is My Welcome Mat, and over a dozen chapbooks. Reigns edited My Life is Poetry, showcasing his students’ work from the first autobiographical poetry workshop for LGBTQ seniors. He has lectured and taught writing workshops around the country to LGBTQ youth and people living with HIV, and worked for a decade as an HIV test counselor in Florida and Los Angeles. In A Quilt for David (City Lights Books), eight people in a small, conservative Florida town in the early 1980s alleged that Dr. David Acer, their dentist, infected them with HIV. Acer’s gayness, and his sickly appearance from AIDS-related illness, made him the perfect scapegoat and a victim of mob mentality. In these early years of the AIDS epidemic, when how it was transmitted was little understood and homophobia ran rampant, people like Acer were villainized. In poetry and prose, Reigns explores the story and the lives of Acer and those who denounced him. Justin Torres, author of We the Animals, wrote he “found this an incredibly moving book. Reigns deals in hard truths, revisioning one man’s life and death, and our collective queer history.”