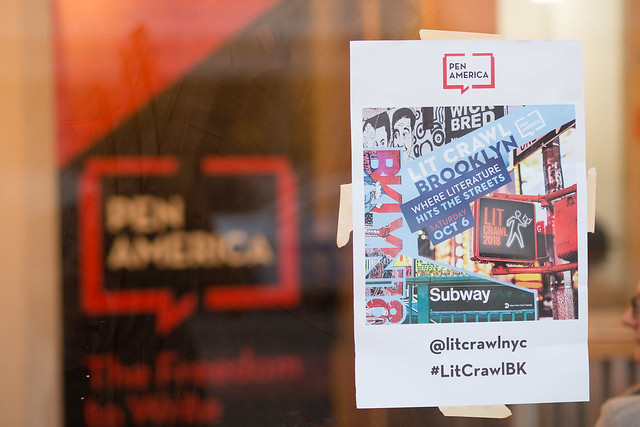 Lit Crawl Brooklyn hit the streets in Crown Heights on Saturday, October 6 from 6-9pm, for readings, trivia, and all sorts of literary fun and games.

When was the last time you asked your taxi driver if they were a poet? Or your elderly parents’ or grandparents’ home health aide? The vendor from whose cart you buy your falafel? The Worker Writers School is trying to reconfigure our assumptions about literature and who writes it. Join our new narrators from NYC’s worker centers as we kick off our 8th year in collaboration with PEN America. With Writers from Domestic Workers United, New York Taxi Workers Alliance, Street Vendor Project, Retail Action Project, and other NYC worker centers.

Novelist Hermione Hoby will read an excerpt from her debut novel, Neon In Daylight, and poet Paul Legault will read poems from his latest collection, Lunch Poems 2, followed by both writers in conversation with arts & culture writer Thora Siemsen. Sponsored by the Franklin Electric Reading Series.

Let your inner editor take a crack at rewriting, rearranging, and reworking the first pages of literary masterpieces. Presented by Paragraph and hosted by acclaimed authors Matthew Thomas (We Are Not Ourselves) and Scott Cheshire (High as the Horses’ Bridles), each round features a first page from an iconic literary work, a pair of scissors, a glue stick, and lots of wine. Think Word Tiles-meets-Beckett. Prizes include Paragraph memberships, discounts, and tote bags. May the best or fastest or funniest rewrite win!

Every Latin American country has their version of The Boogie Man, whom parents use to keep kids in line. Join La Pluma y La Tinta as writers and poets share poems and stories about the mythological creatures that scared them as children (and adults!). With Orlando Ferrand, Mariana Goycoechea, Alexis Francisco, and more!

Setting can be just as important as the main characters in a novel. The Guerrilla Lit Reading Series presents four authors whose novels showcase setting as if it is a fully-realized character. From the remote Alaskan wilderness to Europe in WWII, from the streets of Miami to the town of Flint, Michigan, readers are transported without ever having to get on a plane. Hear authors read their works and discuss their inspirations and the research that went into creating a strong sense of place. With Alex Segura, Lee Matthew Goldberg, Conor Coyne, and Marco Rafalà.

Forget planes, trains, and automobiles—everyone knows books are the best way to travel. Join the books editors from O, the Oprah Magazine as we celebrate the power of place in fiction, exploring the wonderful ways contemporary writers engage with setting in their work. The event will feature short readings and dishy anecdotes from Tayari Jones, Jen Beagin, and A.M. Homes.

The Strong Women Project presents a night of sex and strong women. Join our host Darley Stewart and our bestselling authors as they read some of the most vivid passages they’ve published, along with a more personal Q&A. With Emily Schultz (Men Walking on Water, The Blondes), Tara Isabella Burton (Social Creature), and T Kira Madden (Long Live the Tribe of Fatherless Girls).

The literary podcast Food 4 Thot – a multiracial mix of four queer writers–will bring their story-telling messiness back to the Lit Crawl stage. Your thots Dennis Norris II, Fran Tirado, and Joseph Osmundson will be joined by special guests to read each other in public.

In their first journey here our parents left behind their children while they settled in America: leaving the island behind forever. They left a world that made them happy and comfortable, por obtener el sueño americano. They struggled like many immigrants before and after them. A tension is felt among many immigrants as they encounter the difficulty of forming one’s identity between two countries and two cultures. As children of the diaspora, leaving our island and our culture behind hasn’t been easy. The transition is often a difficult one: transporting us to a place with a foreign language and faces, where we yearn for familiarity, and for a piece of home. As immigrants, we redefine what it means to be Dominican in a new country, struggling to live out el sueño americano. From us a different language is born. It is a mixture of English & Spanish (Spanglish) and a way for us to unite our island with our new home. We create our own Dominican-American Dream which often translates into achieving a higher status than those we left back home, by attaining a degree and enough money to support our families aqui y allá. Featuring readings from Angela Abreu, Sydney Valerio, Mariela Regalado, John Paul Infante, and Paola Cespedes.

You’ll swoon during this book reading. Come hear from debut authors as they share their books with you but be prepared for a visual component to the evening: authors will introduce their books but a smoldering, broody Heathcliff doppelgänger or the Hermione-of-Your-Dreams will take to the stage to give you the full literary experience and read selected passages. These… books… will get your full, undivided attention. Featuring debut author Arvin Ahmadi (Down & Across) and more!

Join us for a night to remember, featuring rapid fire readings by five amazing poets with books recently published by Four Way Books! There will be a wide range of voices covering topics such as ghosts of the past, the end of the world, and brides. With Monica Ferrell (You Darling Thing, September 2018), Miranda Field (Imaginary Royalty, September 2017), Jennifer Franklin (No Small Gift, September 2018), Ben Purkert (For the Love of Endings, March 2018), and Tom Thompson (Passenger, September 2018).

Contemporary Black Queer narratives are critical. Within the literary and theatre worlds, the need for stories that exceed the bounds of the white cis hetero imagination has never been more pronounced. In this Stoop Conversation, Black Queer writers Donja R. Love, Hari Ziyad, Kleaver Cruz, and Darnell L. Moore will share their works, anxieties, and visions for a Black Queer future as imagined and reckoned within their art.

Join Epiphany Magazine for Dead Darlings, a game in which we’ll read two versions of famous literary works and our panel of writers will guess which is the published version and which was an early draft, with the audience competing against them. Come for a bit of fun and an inquiry into the nature literary revision! There will be prizes. Hosted by Epiphany‘s Editor-in-Chief, Tracy O’Neill, and Assistant Poetry Editor, Andrés Cerpa, with Elisa Gonzalez, Nicole Treska, and Jennifer Baker.

Everyone’s favorite literary trivia event returns to Lit Crawl! Ever wanted to yell “Who is Dalloway?!” in a crowded bar? Here’s your chance. It’s just like the game show, except all the questions concern books, heckling is encouraged, and multiple teams can play at once. Want to compete? Simply grab two or three friends, create with a team name, and… that’s it. Hosted by Ryan Chapman, with special guest John Wray, author of the much buzzed-about novel Godsend (arriving in October from Farrar, Straus and Giroux!).

BOMB and The Believer Karaoke!
Friends and Lovers, 641 Classon Ave.

Two of your favorite culture and interview magazines are coming together to celebrate the power of words through literature and famous duets at PEN America’s Lit Crawl Brooklyn. Teams of two are recommended, and judges Mira Jacob, Marie-Helene Bertino, and Kaitlyn Greenidge will hand out awards for the best performances of the night. The best belter, crooner, harmonizer, warbler, yodeler, serenader, cantor, chanter or chanteuse will walk away with literary prizes! 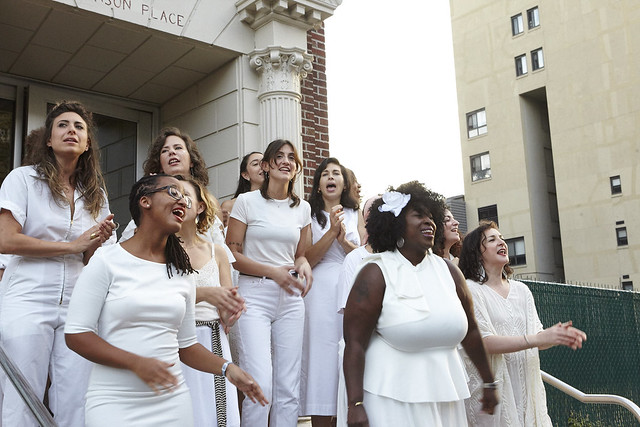 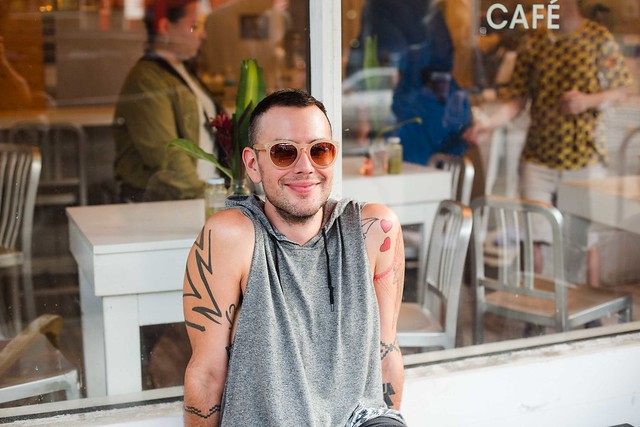 PEN America's Writers' Emergency Fund aims to distribute grants to #writers in acute financial need, especially given the impact of the #COVID19 outbreak. Donate now, and your dollars will go directly to working writers: https://pen.org/donate-writers-emergency-fund/?utm_source=twitter&utm_medium=social&utm_campaign=WEF-donate-ask