[VIRTUAL] Keeping it Local: Where Does Pittsburgh Get Its News? 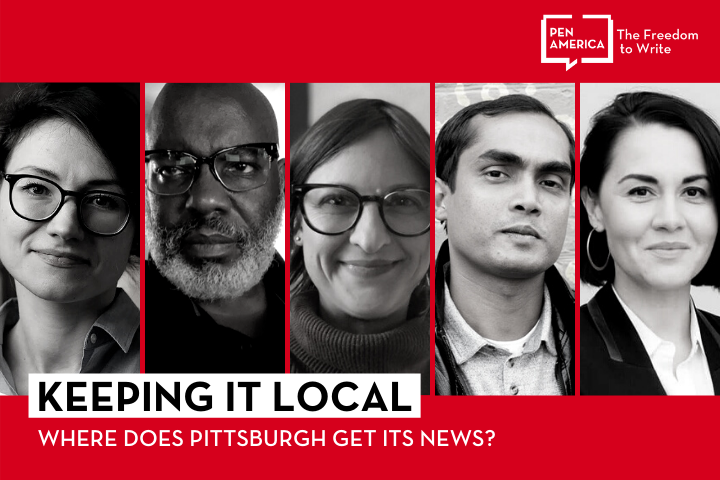 In order to foster grassroots advocacy for local news media and public awareness around the news diets of Pittsburghers, PEN America and the World Affairs Council of Pittsburgh invite you to join in conversation with local journalists and media experts as well as elected officials to explore where Pittsburgh residents get their news, how it connects or disconnects them from the world, affects their beliefs and understandings, and consider the implications of sources of funding for local news outlets. The goal is to promote dialogue about the landscape of Pittsburgh and Pennsylvania news in 2021 and provide tools for the public to engage in citizen advocacy for their local news media.

Together, we’ll explore challenges facing local journalism, including community and multilingual outlets, local journalists and activists on their own advocacy efforts, and legislative solutions to the crisis that maintain media independence. From amplifying local news stories on social media to subscribing to local outlets to lobbying to their elected officials, this town hall will provide powerful advocacy tools to community members interested in supporting their local news outlets.

This event is part of PEN America’s series of town hall convenings, Keeping it Local, which brings together local journalists, organizers, elected officials, and the public to explore the need for a community-driven rescue mission for local journalism after years ravaged by press layoffs, newsroom shutterings, and attacks on the media. We must understand the problem and collectively reaffirm how integral local news coverage is to the health of a community, both literally and figuratively.

This event is co-sponsored by Free Press, the Pittsburgh Media Partnership, and City of Asylum.

Tuhin Das is an exiled writer currently living in the U.S. as a writer-in-residence at City of Asylum. His life was deeply impacted by groups who limit freedom of expression. He left his home country, Bangladesh, in 2016. He is the author of eight poetry books in his native language. He is considered by critics as a significant poet of Generation Zero, who began publishing contemporary Bangladeshi literature in 2000.

Mila Sanina serves as the executive director of PublicSource, a nonprofit, nonpartisan newsroom delivering public service journalism in the Pittsburgh region at publicsource.org. Under Sanina’s leadership, PublicSource has been billed as a convener, an innovative newsroom that is known for its deep local reporting on issues of environment, police accountability, local government, education, and economic development.

Tony Norman is an award-winning columnist at the Pittsburgh Post-Gazette. He began as a clerk in 1988 before becoming the PG’s pop culture/ pop music critic in 1989. He began his general interest column in 1996. He was a member of the PG’s editorial board from 1999-2016. Tony was an adjunct professor of journalism at Chatham University from 2002 to 2018. He’s currently the president of the National Society of Newspaper Columnists and is on the advisory board of the International Consortium of Investigative Journalists and is a founding board member of the International Free Expression Project.

AmyJo Brown is a veteran investigative reporter and editor whose excitement for government budgets, committee meetings and dusty shelves of public records is matched only by her happiness in the day’s first cup of coffee — and her passion for supporting local newsrooms, where she has spent her career. That experience spans publications of all types and sizes, serving communities ranging from those in the cowboy country of eastern Oregon to those deep in the Arkansas Delta. A western Pennsylvania native, AmyJo Brown currently leads the Pittsburgh Media Partnership, a collaborative of 23 local news organizations, where she helps coordinate coverage on special editorial projects and design and implement capacity-building initiatives to support a vibrant, diverse and independent local media ecosystem.

PEN America and several partner organizations are mobilizing our Members and Americans across the country to use their voice to save local news. Join us by calling on your U.S. senators and representatives to support the Future of Local News Act, which would establish a federal advisory commission to study the decline of local news and propose solutions for the industry’s revitalization.

TELL YOUR MEMBERS OF CONGRESS TO SUPPORT LOCAL NEWS

If you would like to help us spread the word about the Future of Local News Act and/or this town hall series, we hope you’ll check out our social media toolkit to access links, visual assets, and sample copy for you to use in original posts across Facebook, Twitter, and Instagram.