Freedom to Protest & Freedom to Speak: The Challenges and Opportunities for University Governance 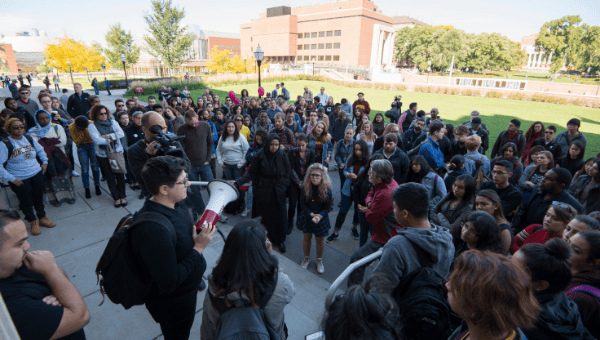 Across the country, universities continue to struggle with the many challenges posed by controversial speakers on their campuses. Debate often centers around a university’s obligation to protect the right of the speaker to speak. But even the most basic commitment to freedom of speech requires more. It also demands that the university protect the right of the protestor to protest. Balancing these demands presents challenges and opportunities for university governance. Universities must ensure campus safety and student well-being, while at the same time facilitating the robust exchange of ideas.

How precisely does UCLA balance these interests? Is there a playbook to which administrators turn when tensions arise between freedom to speak and freedom to protest? Are there particular roles students can play to mitigate the fraught ways that protest and conventional speech collide at UCLA? Find out at this Spring’s CrossCheck Live, where a panel of student moderators will press UCLA administrators about what we must do, as a campus and a community, to protect the protestor’s right to protest and the speaker’s right to speak.

This CrossCheck Live event is open to the public. A more intimate Salon, limited to UCLA students, will follow starting at 5:30pm.

Presented by UCLA’s Office of Equity, Diversity and Inclusion and the UC National Center for Free Speech and Civic Engagement in collaboration with PEN America.

Ernesto is the founder and current President of UCLA Hispanic Latinx Graduate Students Association. He has previously served as Student Ambassador of the European Union at UC Berkeley, President of UC Berkeley UARRL, Researcher for UC Berkeley Restorative Justice Center (research on Human Rights), Editor of UCLA Parrafo Magazine, and Vice President of UCLA Spanish & Portuguese GSA. As GSA D-DICE (AY 2018-2019) he will be working closely with GSA, administrators and several groups and organizations at UCLA to promote diversity, equity and inclusion across campus. He will also serve as Chair of the Student Interest Board at Forum.

Devon Carbado, Associate Vice Chancellor for BruinX – Office of Equity, Diversity, and Inclusion; Harry Pregerson Professor of Law, UCLA School of Law
Devon Carbado is Associate Vice Chancellor of BruinX for Equity, Diversity and Inclusion and the Honorable Harry Pregerson Professor of Law at UCLA School of Law.  He teaches Constitutional Criminal Procedure, Constitutional Law, Critical Race Theory, and Criminal Adjudication. He has won numerous teaching awards, including being elected Professor of the Year by the UCLA School of Law classes of 2000 and 2006 and received the Law School’s Rutter Award for Excellence in Teaching in 2003 and the University’s Distinguished Teaching Award, the Eby Award for the Art of Teaching in 2007. In 2005 Professor Carbado was named an inaugural recipient of the Fletcher Foundation Fellowship. Modeled on the Guggenheim fellowships, it is awarded to scholars whose work furthers the goals of Brown v. Board of Education.

Professor Carbado writes in the areas of employment discrimination, criminal procedure, constitutional law, and identity. He is the author of Acting White? Rethinking Race in “Post-Racial” America (Oxford University Press) (with Mitu Gulati) and the editor of several volumes, including Race Law Stories (Foundation Press) (with Rachel Moran), The Long Walk to Freedom: Runaway Slave Narratives (Beacon Press) (with Donald Weise), and Time on Two Crosses: The Collective Writings of Bayard Rustin (Cleis Press) (with Donald Weise).  A board member of the African American Policy Forum, Professor Carbado was the Shikes Fellow in Civil Liberties and Visiting Professor of Law at Harvard Law School in 2012.

Professor Carbado graduated from Harvard Law School in 1994. At Harvard, he was editor-in-chief of the Harvard Black Letter Law Journal, a member of the Board of Student Advisors, and winner of the Northeast Frederick Douglass Moot Court Competition. Carbado joined the UCLA School of Law faculty in 1997.  He served as Vice Dean for Faculty and Research at the School of Law from 2006-07, and again in 2009-10. Professor Carbado is currently working on a series of articles on race, law, and police violence.

Mick Deluca, Assistant Vice Chancellor, UCLA Campus Life
Michael (Mick) Deluca is the Assistant Vice Chancellor, Campus Life at UCLA where he has worked for the last 28 years. In this role Mick oversees a campus cluster to include the wide variety of recreation programs and services including instructional programs, summer camps, youth and family programs, competitive and intramural sports, 54 club teams, outdoor adventures, fitness and wellness, cultural arts, adaptive sports, and open recreation, and over sight of 22 recreational and multi-use sport facilities including the John Wooden Center and Pauley Pavilion, and Sports Venues event operation and management. In addition he provides administrative oversight of Campus Student Activities (SOLE), student leadership programs, over 1200 student organizations, student event planning, and the Community Programs Office (CPO) to include Student Initiated Access, Campus Retention, and Student Initiated Service Projects.  During his career he has overseen over 20 major capital projects and chaired over 50 university committees. He is currently on the steering committee of the UCLA Health Campus Committee, UCLA Sustainability Committee, was a university lead for the 2015 World Special Olympics Games Los Angeles, and is key university lead with the LA2028 Olympic and Paralympic Games planning. He is recognized as an active leader within the University of California system and Pac 12 Conference and has served nationally within NASPA and NIRSA, Leaders in Collegiate Recreation, where he was in the position of President, 2012-13 and was recognized with the National Honor Award in 2016.

Before her work at CAPS, Dr. Green was a research associate for the Sexual Health Program at the Neuropsychiatric Institute at UCLA conducting research in the areas of HIV/AIDS, sexual risk, and substance use among men and women of color. Dr. Green is actively involved in the Southern California Association of Black Psychologists and is a recipient of the Minority Fellowship Program Award from the American Psychological Association.

Jerry Kang, Vice Chancellor for Equity, Diversity and Inclusion; Distinguished Professor of Law, UCLA School of Law; Distinguished Professor of Asian American Studies Korea Times – Hankook Ilbo Endowed Chair, UCLA
VC Kang graduated magna cum laude from both Harvard College (physics) and Harvard Law School, where he was a supervising editor of the Harvard Law Review. After clerking for the Ninth Circuit Court of Appeals, he started his teaching career at UCLA in 1995. A leading scholar on implicit bias and the law, VC Kang regularly collaborates with leading experimental social psychologists on wide-ranging scholarly, educational, and advocacy projects. He’s won numerous teaching awards, including the law school Rutter Award and the University-wide Distinguished Teaching Award (Eby Art of Teaching). He speaks widely across the country to law firms, corporations, judges, and government agencies on the challenges of implicit bias and how to counter them.

Victoria Sork, Dean of the Life Sciences Division, UCLA College of Letters and Science
Victoria Sork, a renowned plant evolutionary biologist, has served as Dean of Life Sciences Division in the UCLA College of Letters and Science since 2009, has also served as Senior Associate Dean of the David Geffen School of Medicine at UCLA). Managing the Life Sciences Division is a major task that requires skills that go well beyond pure science. Indeed, Life Sciences encompass a wide variety of departmental and interdepartmental programs (Computational and Systems Biology; Ecology and Evolutionary Biology; Integrative Biology and Physiology; Microbiology, Immunology & Molecular Genetics; Molecular, Cell and Developmental Biology; Neuroscience; Physiological Science; Psychology; and Society and Genetics) and include seven affiliate Institutes and Centers. The Division includes about 250 teaching faculty, 500 graduate students, and 7000 undergraduate majors.