[VIRTUAL] Free Expression at Risk in Myanmar: A Military Coup, Communications Shutdowns, and Writers Under Arrest 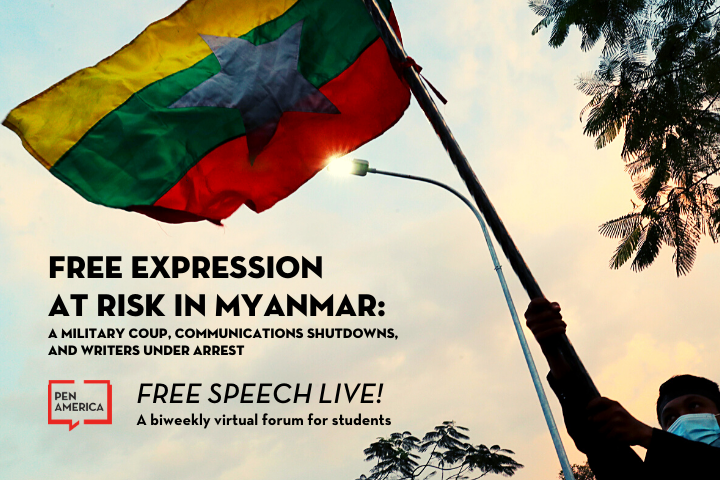 On February 1, the Myanmar military seized power, imposing a one-year state of emergency, arresting political leaders and activists, and shutting down access to the internet and other communications channels. Immediately, PEN America condemned this interruption of the democratic process and called for free expression and other fundamental rights to be respected, and for the lawfully-elected new government to be reinstated. But the country’s recent history regarding human rights and press freedom, especially concerning the Rohingya Muslim minority population, has raised grave concerns that the military leaders behind the coup will sustain or even intensify oppression. What could happen to the media, journalists, activists, and creative artists in Myanmar already operating under repressive laws? What can the world do in response?

Karin Deutsch Karlekar is the director of PEN America’s Free Expression at Risk Programs, and leads PEN America’s assistance to individuals at risk as a result of their expression and an ongoing partnership with PEN Myanmar. She has almost two decades of experience in global free expression, press freedom, and digital rights issues, as well as advocacy and assistance work on behalf of writers, bloggers, and journalists. Prior to joining PEN America, she served from 2001 to 2015 as director of Freedom House’s Freedom of the Press project, coordinating the production of a flagship annual report that tracked trends in global media freedom and rated every country in the world. As well as acting as an expert spokesperson on press freedom issues at conferences, meetings, and in media appearances, Karlekar has developed index methodologies and conducted training sessions on press freedom, internet freedom, freedom of expression, and monitoring dangerous speech; authored a number of special reports and academic papers; and conducted research, assessment, and advocacy missions to Nigeria, South Africa, Uganda, Zambia, Zimbabwe, Afghanistan, Indonesia, Myanmar, Pakistan, and Sri Lanka. She has also worked as an editor at the Economist Intelligence Unit and as a consultant for Human Rights Watch, and served on the governing council (board) of the International Freedom of Expression Exchange (IFEX) network from 2006 to 2009 and 2015 to 2019. She holds a Ph.D. in Indian history from Cambridge University and a BA from Vassar College.

Nicholas Perez is manager of free expression and education at PEN America. He supports PEN America’s advocacy, analysis, and outreach in the national debate around free speech and inclusion in higher education. Perez previously worked for the Columbia University Human Rights Advocates Program and consulted for the Human Rights Education and Training section at the United Nations. He holds a master’s degree from Columbia University in human rights and humanitarian policy and a bachelor’s degree from Georgetown University in international politics. He also was a Global Leadership Fellow at Waseda University in Japan, a Model United Nations advisor at Mira Costa High School, and a forensics researcher for the Yahad-in Unum Genocide Research Agency.