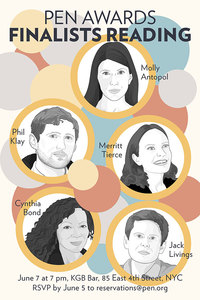 Join PEN staff, awards judges, and supporters for an evening of drinks, readings, and celebration on the eve of the Awards Ceremony where the winner of the PEN/Robert W. Bingham Prize will be announced.

The event will feature the five finalists for the PEN/Robert W. Bingham Prize for Debut Fiction, who will be reading excerpts from their works, nominated by award judges Caroline Fraser, Katie Kitamura, Paul La Farge, and Victor LaValle. At the reading, copies of each of the finalists’ books will be available for purchase courtesy of WORD Bookstores.

Jack Livings for The Dog (Farrar, Straus and Giroux)

Merritt Tierce for Love Me Back (Doubleday)

Molly Antopol’s debut story collection, The UnAmericans, won the New York Public Library’s Young Lions Fiction Award and was a National Book Foundation 5 Under 35 honoree. The book was longlisted for the National Book Award and a finalist for the Barnes & Noble Discover Award, the National Jewish Book Award and the California Book Award. She’s the recipient of a Radcliffe Fellowship at Harvard and a Stegner Fellowship at Stanford, where she currently teaches.

Cynthia Bond is a New York Times Best-Selling Author. Her novel Ruby was chosen to be an Oprah Book Club 2.0 selection. Ruby was also a Barnes & Noble Discover Great New Writers selection, and an Indie Next Pick. A PEN Rosenthal Fellow, Bond attended Northwestern University’s Medill School of Journalism, then moved to New York and attended the American Academy of Dramatic Arts. She founded the Blackbird Writing Collective in 2011. Cynthia has taught writing to at-risk and homeless youth for over fifteen years, and is on staff at Paradigm Malibu Adolescent Treatment Center. She is currently completing the second book in the Ruby Trilogy. A native of East Texas, she lives in Los Angeles with her daughter.

Phil Klay is a graduate of Dartmouth College and a veteran of the U.S. Marine Corps. He served in Iraq’s Anbar Province from January 2007 to February 2008 as a Public Affairs Officer. After being discharged he went to Hunter College and received an MFA. His story “Redeployment” was originally published in Granta and is included in Fire and Forget: Short Stories from the Long War. His writing has appeared in The New York Times, Washington Post, Wall Street Journal, Newsweek, Granta, Tin House, and elsewhere. In 2014 Klay’s short story collection Redeployment won the National Book Award for Fiction. He was also shortlisted for the Frank O’Connor Prize and named a National Book Foundation ’5 Under 35′ honoree. In 2015 he received the Marine Corps Heritage Foundations James Webb award for fiction dealing with U.S. Marines or Marine Corps life and the National Book Critics’ Circle John Leonard Award for best debut work in any genre.

Jack Livings’ stories have appeared in A Public Space, The Paris Review, StoryQuarterly, Tin House, The New Delta Review, Guernica, Best American Short Stories 2006, The Pushcart Prize XXXIII, and The Pushcart Prize XXXVIII. Livings is a graduate of the Iowa Writers’ Workshop and was a Wallace Stegner Fellow at Stanford.

Merritt Tierce, a National Book Foundation 5 Under 35 honoree, was born and raised in Texas, and graduated from college at the age of 19. She received her MFA in fiction writing from the Iowa Writers’ Workshop, where she was named a Meta Rosenberg Fellow. In 2011, she was a recipient of a Rona Jaffe Foundation Writers’ Award. Her first novel, Love Me Back, was published in 2014 by Doubleday. Merritt lives near Dallas with her husband and children.