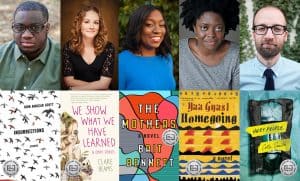 This event is free and open to the public. RSVPs are strongly encouraged due to limited space. Click here to RSVP.

The winner of the PEN/Robert W. Bingham Prize will be announced the following day at the 2017 PEN America Literary Awards Ceremony hosted by Aasif Mandvi at 6:30 pm at The New School’s John L. Tishman Auditorium in NYC.

Copies of each of the finalists’ books will be available for purchase, courtesy of WORD Bookstores.

* Tanwi Nandini Islam will read on behalf of Brit Bennett.

More about the Finalists

Rion Amilcar Scott teaches English at Bowie State University. He earned an MFA at George Mason University, where he won both the Mary Roberts Rinehart Award and a Completion Fellowship. His work has appeared in publications such as the Kenyon Review, Crab Orchard Review, PANK, The Rumpus, Fiction International, the Washington City Paper, The Toast, and Confrontation.

Clare Beams is the author of the story collection We Show What We Have Learned (Lookout Books). Her stories appear in One Story, n+1, Ecotone, The Common, the Kenyon Review, Hayden’s Ferry Review, Electric Literature’s Recommended Reading, and The Best American Nonrequired Reading, and have received special mention in The Best American Short Stories 2013 and The Pushcart Prize XXXV. She is the recipient of awards from the National Endowment for the Arts and the Bread Loaf Writers’ Conference, and currently blogs for Ploughshares. After teaching high school English for six years in Falmouth, Massachusetts, she moved with her husband and daughter to Pittsburgh, where she teaches creative writing at Saint Vincent College and the Pittsburgh Center for the Arts.

Born and raised in Southern California, Brit Bennett graduated from Stanford University and later earned her MFA in fiction at the University of Michigan, where she won a Hopwood Award in Graduate Short Fiction as well as the 2014 Hurston/Wright Award for College Writers. Her work is featured in The New Yorker, The New York Times Magazine, The Paris Review, and Jezebel. THE MOTHERS, her first novel, is now a national bestseller.

Yaa Gyasi was born in Ghana and raised in Huntsville, Alabama. She holds a BA in English from Stanford University and an MFA from the Iowa Writers’ Workshop, where she held a Dean’s Graduate Research Fellowship. She lives in Brooklyn.

Cote Smith grew up in Leavenworth, Kansas, and various army bases around the country. He earned his MFA from the University of Kansas, and his work has been featured in One Story and FiveChapters. He lives in Lawrence, Kansas.