Be the Facts You Wish to Read: A Press Freedom Discussion—Minneapolis

With an overflow in the amount of information that is readily available to us as readers due to the advancement of technology, it may be difficult to understand the facts that are presented to us as consumers of the news. The Target Performance Hall located in Minneapolis, Minnesota, was the host location for an in-depth discussion about censorship, news literacy, and the importance of fact-checking with locally based writers and authors.

Panel members for this conversation included Sheila Regan and Sun Yung Shin along with PEN America Members Shannon Gibney, Caroline Casey, and Marya Hornbacher. This panel was moderated by Joanna R. Demkiewicz (The Riveter). When it comes to fraudulent news, you have an active role to play. After this evening, participants were able to take the steps necessary to understand how they can speak up for press freedom and learn to engage in productive dialogue. 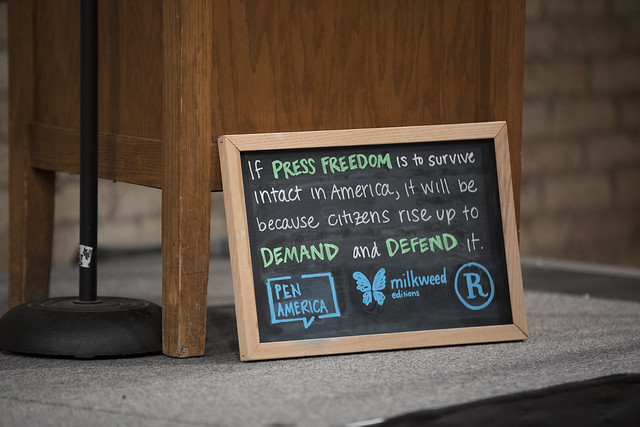 신 선 영 Sun Yung Shin was born in Seoul, Korea and grew up in the Chicago area. She is the editor of A Good Time for the Truth: Race in Minnesota, author of poetry/essay collections Unbearable Splendor (winner of a Minnesota Book Award); Rough, and Savage; and Skirt Full of Black (winner of an Asian American Literary Award), co-editor of Outsiders Within: Writing on Transracial Adoption, and author of bilingual illustrated book for children Cooper’s Lesson. She lives in Minneapolis. [Photo by Uche Iroegbu]

Shannon Gibney is a writer, educator, activist, and the author of See No Color (Carolrhoda Lab, 2015), a young adult novel that won the 2016 Minnesota Book Award in Young Peoples’ Literature. Gibney is faculty in English at Minneapolis Community and Technical College, where she teaches critical and creative writing, journalism, and African Diasporic topics. A Bush Artist and McKnight Writing Fellow, her next novel, Dream Country, is about more than five generations of an African descended family, crisscrossing the Atlantic both voluntarily and involuntarily (Dutton, 2018). [Photo by Kristine Heykants]

Sheila Regan is a performer, playwright and journalist living in the Twin Cities. As a writer, she works most often with MN Artists, City Pages, and TC Daily Planet and also contributes to Vita.mn, Classical MPR, Minnesota Women’s Press, and Hyperallergic. As a performer, she is a member of Nightpath Theatre Company and has worked with numerous local companies, besides doing her own independent work. She also teaches theater for young people through Stages Theatre Company and In the Company of Kids, and portrays individuals with mental illness for trainings with the Barbara Schneider Foundation. She has a B.A. in Theatre from Macalester College and an M.F.A. in acting from Indiana University. [Photo by Shelly Mosman]

Marya Hornbacher is an award-winning essayist, journalist, and the New York Times best-selling author of five books. Hornbacher’s work has been published in eighteen languages, and her writing across genres appears regularly in literary and journalistic publications around the world, most recently in AGNI, Gulf Coast, The Normal School, Fourth Genre, DIAGRAM, Broad Street, and The Bellingham Review. Her sixth book, a work of long-form journalism, will be published in 2018, and her seventh, a collection of essays, is underway. She was recently honored with the Annie Dillard Award in Creative Nonfiction. Find out more about her work at www.maryahornbacher.com.

Caroline Casey is the managing director at Coffee House Press. She has a background in marketing, publicity, and acquisitions, including stints at Sarabande Books and Stanford University Press, and holds an MFA from the Nonfiction Writing Program at the University of Iowa.

Joanna R. Demkiewicz is a cofounder and the editorial director of The Riveter, a women’s long-form lifestyle magazine both online and in print, as well as the publicist at Milkweed Editions, an independent nonprofit publisher. She received her Bachelors in Journalism from the University of Missouri Journalism School in 2013, where she studied Magazine Writing and Gender Studies. She lives in Minneapolis.

Be the Facts You Wish to Read: A Press Freedom Discussion