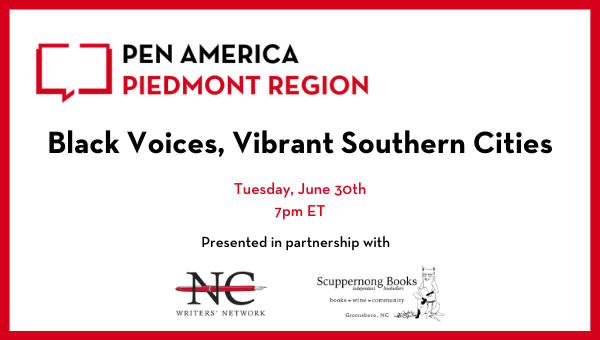 “Black Voices, Vibrant Southern Cities” will explore the importance of Black cultural creatives to the cultural and civic life of cities in the South, and the role of revolutionary art vs. the creation of reactionary art. Moderated by artist, educator, poet, scholar, and community organizer Dasan Ahanu, the conversation with feature Princess Johnson, international dancer, choreographer, entrepreneur, and motivator; Korinn Annette Jeffries, playwright; and T. Walker, artist, educator, poet, and gallery curator.

Presented in partnership with

Dasan Ahanu is an artist, educator, scholar, and community organizer born and raised in Raleigh, North Carolina. In addition to performing across the country, Ahanu has hosted or coordinated many poetry, jazz, hip-hop, and cultural arts events. Working as an organizer around issues such as literacy, social injustice, workers rights, domestic violence, and sexual assault, he has assisted institutions and organizations in coordinating programming, trainings, and art-based projects intended to engage the community. He also was a writing fellow with the Center for Community Change in Washington, D.C., writing about the economic struggles for families, students, and artists. His work has been featured on National Public Radio (NPR), where he is noted for his appearances on “News and Notes with Ed Gordon” and “State of Things with Frank Stasio.” His writing is featured online and in print publications. He has been showcased on NBC 17, featured on the third season of Lexus’s Verses and Flow aired on TV One, and in a documentary entitled Poet Son that aired on WUNC-TV as a part of the North Carolina Visions film series. He has released numerous spoken word recordings and published three books of poetry. Ahanu is a resident artist with the St. Joseph’s Historic Foundation/Hayti Heritage Center in Durham, NC, where he has developed poetry and spoken word programming for youth and adults. He is cofounder and managing director of Black Poetry Theatre, a Durham-based theatre company that creates and produces original poetry and spoken word-based productions. In 2004, he was awarded an Indy Arts Award by Independent Weekly Magazine for his work in arts and activism. Then in 2015, he was awarded the honor again, the first time in the award’s history that has happened. Ahanu is also an alumni of the Nasir Jones Fellowship with the Hip Hop Archive at Harvard University’s Hutchins Center for African & African American Research. He is a scholar whose academic work is focused on critical writing, creative writing, hip-hop, and popular culture. Currently, Ahanu is a visiting professor at UNC-Chapel Hill in Chapel Hill, NC, where he teaches courses on hip-hop and Black culture. He is also the Rothwell Mellon Program Director for Creative Futures with Carolina Performing Arts.

Princess Johnson is an international dancer, choreographer, entrepreneur, and motivator. Her parents always sought out opportunities for her and her siblings to get on stage and use their talents. Johnson always seemed to like dance the best, so she took a few lessons as a child, but most of her experience has been in choreography. She has choreographed dances since she was eight years old. Johnson continued to pursue her passion and developed her dance technique training by completing a dance degree at UNCG, along with her business degree. She also interned at Richmond Ballet in Richmond, VA as a dance management intern, where she worked alongside the business manager and development director to learn about nonprofit dance company management. Upon returning to NC, Johnson taught classes at Triple Threat DanCenter in Winston-Salem and High Point, and went on to establish Royal Expressions Contemporary Ballet in 2009. Johnson has created six original dance productions, has taught hundreds of students, and even led a team to bring world-renowned ballerina, Misty Copeland, to Greensboro, NC in 2014 as well as Alicia Graf Mack of Alvin Ailey in 2015. In 2017, Johnson received a Project Plie scholarship from American Ballet Theatre and became certified as a national training curriculum teacher in levels pre-primary to level three. In the summer of 2019, she continued her training to include levels four and five. Johnson had the pleasure of traveling to Nairobi, Kenya in the summer of 2018 to share her love and joy of dance with the children of Kibera and other parts of Kenya. While there, she had her first international performance at a church in a Maasai village. She is a visionary and truly believes in the power of never losing your momentum. In her spare time, Johnson enjoys being the wife of Shane Johnson, pastor of The Lighthouse in Greensboro; taking walks; and reading books. You can keep up with her through her blog or follow her on Facebook and Instagram at @princessjlovesballet.

Korinn Annette Jefferies is a playwright who works as both a creator and analyst of Black theatre. She holds a bachelor of fine arts in professional theatre from North Carolina A&T State University, and has studied theatre for over 12 years. Her play, Nigger!: an examination of otherness, was presented at the 2019 Black Theatre Network Conference and the 2019 National Black Theatre Festival in Winston-Salem, NC. In February 2020, Jefferies’s most recent play, the water, was presented as a part of PIECE OF MINE Arts’s Black Women in Theatre Festival in Toronto, ON. the water has also been featured as a reading during the Dramatist Guild’s 2019 Footlights Reading Series in Charlotte, North Carolina. She is an active member of the Dramatists Guild and the Black Theatre Network. Jefferies’s study and creation of theatre focuses on ritual, defined as a repeated activity, event, or action. Her works are centered around the practice of life (being or existing) and what that looks like in the context of Blackness, without the restriction of a non-Black gaze. Jefferies is currently studying the impact of a changing audience demographic on the perception of Black theatre from 1930 to 1950.

T. Walker is an artist, educator, gallery curator, and cofounder of S.O.U.L. Society, a nonprofit organization focused on community empowerment and youth mentorship through the arts. T. Walker has toured the country, opening for artists such as Cyhi The Prince, Nick Grant, Wise Intelligent (of Poor Righteous Teachers), Sunni Patterson, KRS-One, Pastor Troy, and more. Utilizing his art to push forward conversation and discuss important topics through hip-hop, he had the opportunity to have a viewing of his “Gentrification” music video at UNCG, NCA&T, and the Harvey B. Gantt Center in Charlotte, NC to discuss the topics of gentrification and redlining. In 2019 during his 2020 Vision tour, he headlined the National Black Theatre Festival’s Words & Verses, formally known as midnight poetry jam in Winston-Salem, NC, alongside his WORD Society poetry team. Upon completion of his tour in February 2020, he had the phenomenal opportunity to speak alongside Kent Ford, founding member of Portland’s Black Panther chapter of the ’60s, to celebrate Black History Month with a special event exploring the local history of the Black Panther Party. T. Walker is currently studying the arts as a revolutionary movement and focusing even heavier on education of history, entrepreneurship, and storytelling through hip-hop and poetry.