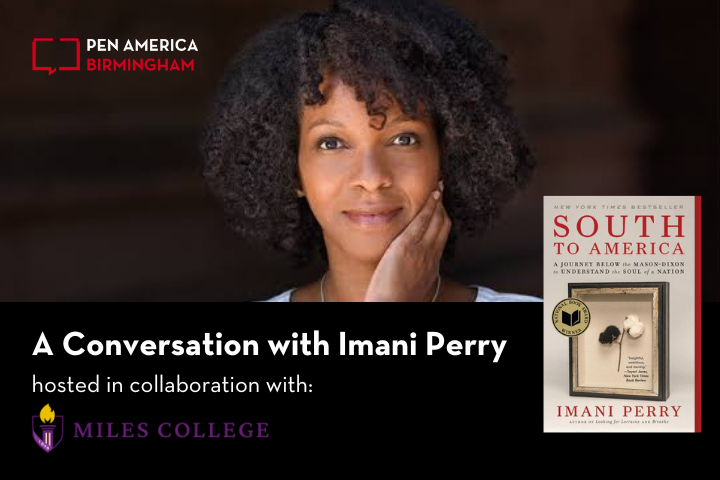 Please join PEN America Birmingham for the final event in the Birmingham Reads program featuring a conversation with National Book Award winner Dr. Imani Perry, author of South to America: A Journey Below the Mason-Dixon to Understand the Soul of a Nation.

Join us for a discussion between Perry and Birmingham-based teaching artists Tania De’Shawn and Brianna Jordynn Wright. The discussion will be followed by an audience q&a.

The Birmingham Reads Project is a citywide literary event dedicated to engaging and uniting Birmingham community members in reading one book of fiction or nonfiction in one given year. This year’s selection, South to America: A Journey Below the Mason-Dixon to Understand the Soul of a Nation (winner of the 2022 National Book Award for nonfiction), by Birmingham native Imani Perry, is an ambitious accounting of the beauty, tragedy, and history of the Southern United States.

Please note: You don’t have to read South to America to enjoy this event. This event is free and open to the public. 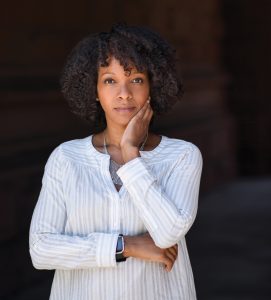 Imani Perry is the Hughes-Rogers Professor of African American Studies at Princeton University. Perry is the author of Looking for Lorraine: The Radiant and Radical Life of Lorraine Hansberry, winner of the 2019 Bograd-Weld Biography Prize from the Pen America Foundation. She is also the author of Breathe: A Letter to My Sons; Vexy Thing: On Gender and Liberation; and May We Forever Stand: A History of the Black National Anthem. Perry, a native of Birmingham, Alabama, who grew up in Cambridge, Massachusetts, and Chicago, lives outside Philadelphia with her two sons. 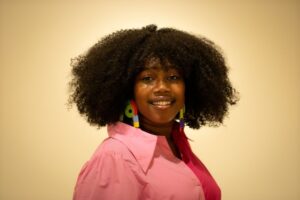 Tania De’Shawn is a poet, teaching artist, and entrepreneur. She holds a Bachelor’s degree in Psychology from Berea College; she is the author of her debut poetry collection, Be Gentle with Black Girls. Her collection serves as an entry point to addressing the adultification bias that negatively affects the education and social development of Black girls across the nation. She is set to be the Keynote Speaker for the Birmingham Public Libraries Local Authors series to discuss her book further and hold an open discussion on addressing the adultification bias within her community. Her collection was nominated for the 2022 VIP Heavy Hearts Neighborhood Award. Tania’s poetry has been featured at the Birmingham Civil Rights Institute, Sidewalk Film Festival, Birmingham Public Library, the historic Majesty Lounge, and more. Her co-choreographed choreopoem “Sister Circle” debuted at the Berea College Kinetic Expressions showcase in 2018. She uses her craft to keep the legacy of Ntozake Shange alive by teaching choreopoetry to artists of all ages and backgrounds. Tania is currently based in Birmingham; she serves the community as a volunteer with Flourish Alabama, which helps young artists bloom. Tania is the founder of Element Agape, an organization that nourishes artists to create art that affects social change. 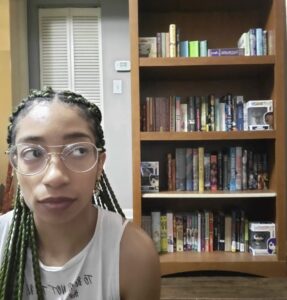 Brianna Jordynn “B.J.” Wright is a writer, educator, and scholar based in Birmingham, AL. In 2019, she graduated cum laude from the University of Alabama at Birmingham, obtaining her Bachelor of Arts degrees in Anthropology (minor in Women’s Studies) and African American Studies (concentration in Historical Investigation and Cultural Awareness). She is currently pursuing a Master of Arts degree in Africana Studies from Georgia State University (concentration in Community Empowerment). She takes inspiration from classic scholars such as Dr. W.E.B. Du Boise, Zora Neale Hurston, Harold Cruse, Audrey Lorde, Dr. Huey P. Newton, bell hooks, and Toni Morrison. Her current research interests include, but are not limited to the impact of language policing on Black adolescents, the role of Blackness in comics and anime, and conceptually defining the Master’s House.

This project was made possible by: