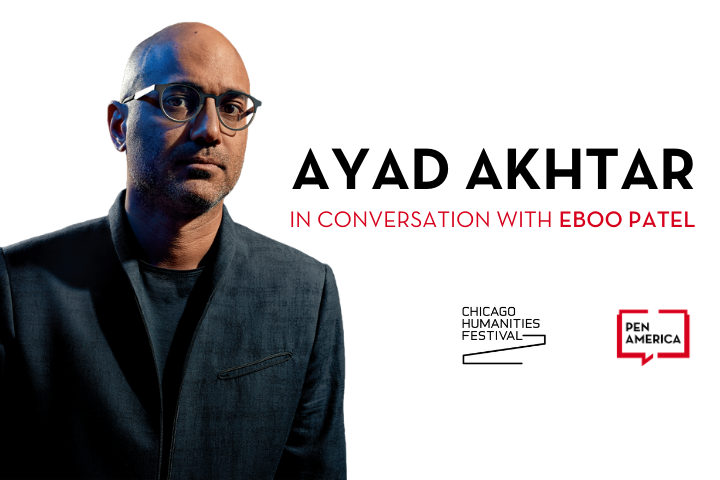 In partnership with the Chicago Humanities Festival, PEN Across America is excited to present a conversation with Ayad Akhtar about his new novel, Homeland Elegies, on Wednesday, September 23 at 7pm CT.

Drawing on his perspective as the child of Muslim immigrants, Akhtar pens an elegy to the American dream. Part memoir, part fiction, this novel about a father and son searching for belonging paints a picture of disillusionment. Akhtar will be joined by Eboo Patel, Obama-administration alumnus and founder of Interfaith Youth Core, to discuss his latest book and what it means to call a country home.

This virtual event will be livestreamed on YouTube with a live Q&A. Registered guests will receive details on how to access the event via email. Register in advance for the event. Copies of Homeland Elegies are currently available for order online.

This program is generously underwritten by Anita and Prabhakant Sinha and is presented in partnership with PEN America.

Ayad Akhtar is a novelist and playwright. Akhtar is the winner of numerous awards, including the Pulitzer Prize for Drama and an Award in Literature from the American Academy of Arts and Letters. Akhtar is the author of American Dervish (Little, Brown & Co.) and his latest book Homeland Elegies. As a playwright, he has written Junk (Lincoln Center, Broadway; Kennedy Prize for American Drama, Tony nomination); Disgraced (Lincoln Center, Broadway; Pulitzer Prize for Drama, Tony nomination); The Who & The What (Lincoln Center); and The Invisible Hand (NYTW; Obie Award, Outer Critics Circle John Gassner Award, Olivier, and Evening Standard nominations). As a screenwriter, he was nominated for an Independent Spirit Award for Best Screenplay for The War Within. Among other honors, Akhtar is the recipient of the Steinberg Playwrighting Award, the Nestroy Award, and the Erwin Piscator Award. Akhtar is a Board Trustee at PEN America, the Rockefeller Brothers Fund, and New York Theatre Workshop. Akhtar will be the next president of PEN America.

is the founder and president of Interfaith Youth Core (IFYC), a nonprofit organization working to make interfaith cooperation a social norm in America. He served on President Obama’s Inaugural Faith Council. Patel is a respected leader on national issues of religious diversity, civic engagement, and the intersection of racial equity and interfaith cooperation. He is the author of four books: Acts of Faith, Sacred Ground, Interfaith Leadership, and Out of Many Faiths. Patel’s op-eds and interviews have appeared in The New York Times, The Washington Post, The Chronicle of Higher Education, on National Public Radio, and PBS NewsHour. He also publishes a regular blog for Inside Higher Ed, called “Conversations on Diversity.” Eboo is an Ashoka Fellow, a member of the Young Global Leaders Network of the World Economic Forum, and has served on the Religious Advisory Committee of the Council on Foreign Relations and the National Committee of the Aga Khan Foundation. He has been awarded the Louisville Grawemeyer Prize in Religion, the Guru Nanak Interfaith Prize, the El Hibri Peace Education Prize, the Council of Independent Colleges Academic Leadership Award, along with honorary degrees from 15 colleges.

As a critical voting bloc in various battleground states such as Texas, Florida and Arizona, Latino voters are being bombarded with misinformation ahead of November 3. https://bit.ly/3mkWzlV

Young voters need to be prepared to expect the unexpected this election season and persist to mobilize their communities to vote! Students can register now to rally the vote with PEN America next Wednesday 10/28 at 6PM ET: https://bit.ly/3dTAxUy.

Don't forget to register for Monday's event Be Heard. Be Smart. Your Voice Matters., an exciting panel with first-time voters on civic engagement, misinformation, and other important issues: https://pen.org/event/be-heard-be-smart-your-voice-matters. #WhatToExpect2020