[VIRTUAL] Activating Youth in the Global Fight for Press Freedom 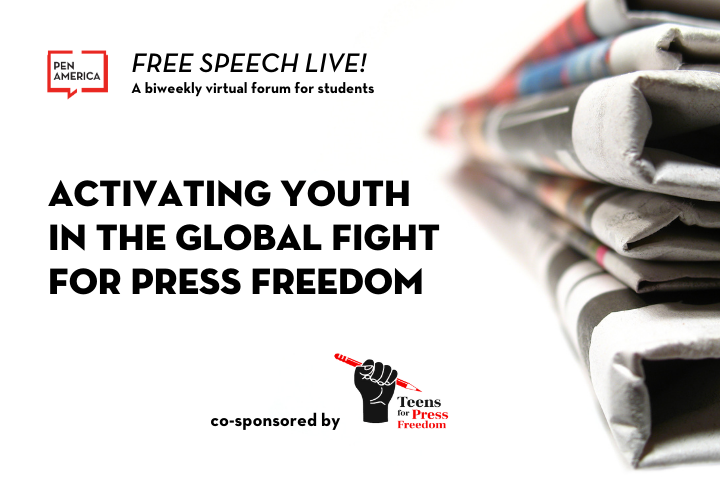 Voice of America (VOA) was established in 1942 as an international agent for the free press and is the largest international broadcaster in the United States, reaching over 280 million people around the world in over 40 languages. As an organization that prides itself as being committed to providing comprehensive news coverage and telling audiences the truth, VOA exemplifies to the world true principles of a free press. Few know these principles and VOA better than Amanda Bennett, who served as director from 2016 to 2020 and substantially enhanced their global free speech advocacy programming.

Join PEN America’s Campus Free Speech Program and Teens for Press Freedom for this online forum featuring a brief presentation, discussion, and expert-facilitated Q&A session with Amanda Bennett, to discuss the challenges and threats to international press freedom today, and what young people can do to help address them. High school and college alumni of PEN America’s youth programs, members of the Teens for Press Freedom, and other students are welcome to join.

Presented in collaboration with the Teens for Press Freedom.

Amanda Bennett is a Pulitzer Prize-winning author, investigative journalist and editor, and served as the director of Voice for America from 2016 to 2020. Through 2013, she was executive editor at Bloomberg News. She was also cofounder of Bloomberg News’ Women’s Project. She was editor of The Philadelphia Inquirer from June 2003 to November 2006, and prior to that was editor of the Lexington Herald-Leader in Lexington, KY. She also served for three years as managing editor/projects for The Oregonian in Portland. Bennett served as a Wall Street Journal reporter and editor for more than 20 years.

A graduate of Harvard College, she held numerous posts at the Journal, including auto industry reporter in Detroit in the late ’70s and early ’80s, Pentagon and State Department reporter, Beijing correspondent, management editor/reporter, national economics correspondent, and finally, chief of the Atlanta bureau until 1998, when she moved to The Oregonian. Most recently, she has been a contributing columnist for The Washington Post. Bennett shared the 1997 Pulitzer Prize for  National Reporting with her Journal colleagues, and in 2001 led a team from The Oregonian to a Pulitzer Prize for Public Service. Projects by the Bloomberg Projects and Investigations team won numerous awards, including Loeb, Polk, Barlett & Steele, Headliners, Society of American Business Editors and Writers, and Overseas Press Club Awards. She is the author of six books, including In Memoriam (1998), co-authored with Terence B. Foley; The Man Who Stayed Behind (1993), co-authored with Sidney Rittenberg; Death of the Organization Man (1991); and The Quiet Room (1996), co-authored with Lori Schiller. The Cost of Hope, her memoir of the battle she and Foley—her late husband—fought against his kidney cancer, was published in June 2012 by Random House.

Nicholas “Niko” Perez is the manager of free expression and education at PEN America. In this role, he advances PEN America’s efforts to catalyze a more informed, civic culture through free expression education for the rising generation and the general public, and supports advocacy, analysis, and outreach in the national debate around free speech and inclusion in higher education. Perez co-directs the Free Speech Advocacy Institute and hosts Free Speech Live!, a biweekly series of youth-oriented discussions focusing on contemporary issues related to free speech, open exchange, human rights, and democracy. Perez previously worked for the Columbia University Human Rights Advocates Program and consulted for the Human Rights Education and Training section at the United Nations. He holds a master’s degree from Columbia University in human rights and humanitarian policy and a bachelor’s degree from Georgetown University in international politics. He also was a Global Leadership Fellow at Waseda University in Japan, a Model United Nations advisor at Mira Costa High School, and a forensics researcher for the Yahad-in Unum Genocide Research Agency.

About Teens for Press Freedom

Today is Toni Morrison's birthday. We celebrate her life and her words with this short clip of Toni reading from her latest work at a PEN America tribute event dedicated to her in 2016. Watch the full recording of the event here: https://bit.ly/3u715cC.

PEN America's Literary Awards are juried by panels of esteemed, award-winning writers, editors, translators, and critics from diverse backgrounds and around the globe. Learn more about our judges and this year's finalists: https://bit.ly/2YWKrvj.