A Constellation of Vital Phenomena with Anthony Marra, Thursday February 26 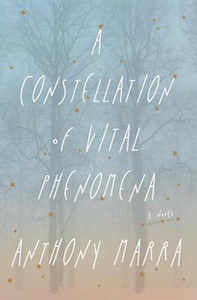 Hosted by Jeanmarie and Billy Fenrichlorna@pen.org if you are interested in being on the waitlist.

*please note: this dinner is now full. Please contact lorna@pen.org if you are interested in being on the waitlist

You are invited to a private dinner with Pushcart Prize, Narrative Prize, and Whiting Award winner Anthony Marra. The dinner will be hosted by Jeanmarie and Billy Fenrich on Thursday February 26, 2015 at 7:30pm and all contributions will benefit PEN American Center.

Marra will talk about his hit debut novel, A Constellation of Vital Phenomena. “A haunting novel set in a nearly abandoned hospital in war-torn Chechnya that is both intimate and ambitious in scope. Eight-year-old Havaa, Akhmed, the neighbour who rescues her after her father’s disappearance, and Sonia, the doctor who shelters her over 5 dramatic days in December 2004, must all reach back into their pasts to unravel the intricate mystery of coincidence, betrayal and forgiveness which unexpectedly binds them and decides their fate.”