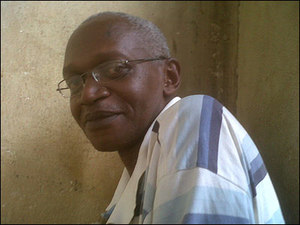 Enoh Meyomesse is the author of 15 books and a founding member of the Cameroon Writers Association. In October 2011, he ran for office against President Paul Biya, but had his candidacy revoked after the government claimed he did not properly register. On November 22, 2011,  Meyomesse was arrested upon his return from Singapore and charged with attempting to organize a coup, possessing a firearm, and aggravated theft. All charges against him have since crumbled due to lack of evidence in the months following his arrest, but Meyomesse’s detention was recently extended until December 30, 2012.

To find out how you can take action, see PEN’s alert.

Below is the text of Meyomesse’s prison journal, transcribed from a handwritten note by Meyomesse in Kondengui Prison. Click <here for the original French.

Translated from the French by Amy Reid

I arrived in Kondengui on December 22, 2011, at 2 pm. My first days were difficult, although nothing like the thirty days I spent in total darkness in solitary confinement in Bertoua. They were as different as day and night. That said, as soon as I landed in this prison, I was, like everyone else, relieved of many items, notably my cell phones (the prison guards quite simply stole them), my belt, my USB drives, and various other personal effects, all of which, it seems, are forbidden in the prison. But that’s not all: the prison guards—most of whom are real parasites—extorted no less than 12,000 francs from me before I had even made it from the prison’s intake yard, la cour d’honneur, which is off-limits for prisoners, to the second nameless yard that leads to the different sections of the prison.

After being registered by the penitentiary staff, I ended up in Section Four, also known as the “Transition Cell.” That’s where all the new arrivals are sent until a place is found for them in one of the other sections. There I was “welcomed” by the “Commander” and the “Mayor” of the section, who explained the “rules and regulations” to me. Everything has a price. First, I had to undergo an obligatory haircut, at my own expense, to make sure I was “clean.” Shaved head. Price: 500 francs. Then, there were the “Mayor’s Dues.” Price: 15,000 francs. If you can’t pay, you’re sent to a cell without bed or light. Yow! More of that Bertoua torture! No way! I quickly hand over the sum, no arguments. Then it is made clear to me that under no circumstances am I to leave the Transition Cell. No question of wandering around in the yard like everyone else. Evidently, I am now in a prison within the prison.

And it doesn’t end there, no. If I want to sit down in the corner where the television is set up, I have to pay 500 francs each time. Then more and more and more… You have to pay for this and for that. Money, money, it’s always about money. One endless scam. Just then, some large aluminum pans are brought into the tiny yard of the Transition Cell. What’s in them? The famous “penal rations.” Food fit for a poor man’s dog—those of the rich certainly wouldn’t touch it. It’s a mix of corn and beans boiled in unsalted water. Disgusting. 10 pm. Everyone to bed. I am assigned to a bed already occupied by another person. We sleep in pairs, head to toe. His feet are right in front of my nose and vice-versa. Hello mosquitoes. Not to mention the roaches and rats, some of which are almost the size of boars.

I’ll spend 38 days in this disgusting place, although admittedly it’s a thousand times better than my solitary cell in the Bertoua police station. I have to cough up another 43,000 francs so I can be moved to an acceptable section of the prison, Section Three. Once there, it’s the same routine. It’s 15,000 francs to be admitted to a cell for “respectable people,” 3,500 francs for the Mayor’s dues for Section Three, another 3,500 for those of the cell I’ve been assigned to. All told, 22,000 francs. Add to this the amount I had to pay to be released from the Transition Cell and the 12,000 francs extorted by the guard. Since the day I was admitted, I’ve had to pull 77,000 francs [about $144USD; average per capita income in Cameroon is $2300USD] from my pocket. Translation: it’s best not to be poor in Kondengui. And what if I hadn’t paid all that money? Well, then I would have been sent to the horrendous “Kosovo Section,” so dreaded by the prisoners. The inmates there are packed in, 80 or even 100 to a cell with just 15 beds… which means that 65 to 85 people are left to sleep outside in the section’s yard. Hello hard ground! Hello homosexuality! Hello assaults! Hello razor blades! Hello spoons filed into pocket-knives! It’s a real hell…

So here I am, with a bed all to myself in a cell for “respectable persons,” and my cellmates are just that. No arguments, no insults, no fights, no drugs, no alcohol, no homosexuality, as in most of the other rooms. I have my own television set that I rent by the week.

My days follow one after the other in a deathly monotony, like the hours on a clock. We are all roused from bed at 4 am by the commotion of the Catholics, who start chanting their morning mass in the section’s yard, with no consideration for the rest of the other inmates. No hope of falling back asleep, for once they are done, the Pentecostals pick up the baton and start their service. When they’re done, at about 5:30 am, it’s the turn of the mainline Protestants. They finish up their hullabaloo at about 6 am. Dare to ask them to turn down the volume? You’re hit square in the face with a flood of insults. Once out of bed, it’s time for our morning ablutions. Between 6:45 and 7 am, loud whistle blasts. “Court docket! Court docket!” A trusty, a prisoner who works for the authorities, reads off the list of prisoners called to court so their cases can be reviewed or for sentencing. At 7:30 am, breakfast, the bread never arrives before then. Then I watch the news on Canal 2, the French international channel. At 8 am, I head off to the prison library. Reading and writing until 2 or 3 pm. Return to my cell. Meal. Free time. 5 pm, repeated loud whistle blows. “Roll call! Roll call!” Everyone back in their cells. This is when they check to make sure the prisoners are all accounted for. They have to make sure no one’s managed to escape. 8 pm, dinner. 10 pm, everyone’s in bed. There’s no one left in the section’s yard.

Visitors’ days—namely Tuesday, Thursday and Sunday—are special times for the inmates. It’s our chance to have some contact with our family and friends. But for me, these days are just like all the others because my family has totally abandoned me; no relatives ever visit. “After all that political nonsense and the books where you criticize Paul Biya…” That’s how their thinking goes. Friends, on the other hand, haven’t abandoned me. It’s thanks to their financial support that I’m able to avoid eating the disgusting “prison rations.” For security reasons, I was advised not to make my own meals, as do most of the prisoners who refuse to ingest the prison rations. Why? A poisoning would surely have followed. So I eat food prepared by the informal restaurants organized by prisoners inside the various sections.

At the beginning, the other inmates treated me badly. In the prison yard, they’d bump into me and pick my pockets. Once when I was taking a bath, someone stole my piece of soap, without my noticing. I was also almost victim of an assault. But then, with the television, radio and newspapers reporting non-stop on my situation, their attitude has radically changed. Now everyone refers to me with respect and affection as the “President” or the “Old Man,” because of my white hair. Even the prison guards, who were at first quite disdainful of me, have totally changed. Now, to my surprise, I’m protected in a way by my fellow inmates. One day, a guy who was exercising in the prison yard bumped into me by mistake. He was almost lynched by the other prisoners. “No funny business with our Old Man…”

But what’s hardest for me is my eyesight. After those 30 days in total darkness in Bertoua, it’s starting to go. My greatest worry these days is that before long I’m going to find myself totally blind. In prison, there are no ophthalmologists. For that I’d have to be sent to the hospital. But as long as I’m being held in preventive custody, there’s no question of that. Only prisoners who have been duly sentenced are permitted to be released for a hospital visit. So, as long as I am neither sentenced nor freed, I can’t have any care. That’s how things are here: prison rules.

These views are the author’s and do not represent the views of PEN American Center.