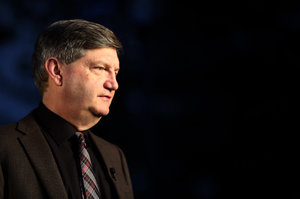 As members and supporters of PEN American Center, an organization representing over 3,500 writers, we write to you today to ask that the Justice Department immediately end its efforts to compel James Risen to identify his confidential source(s).  We hope you will take immediate action in this regard, fulfilling your pledge and sending a vital principled message in defense of press freedom before you leave office.

We are signing this letter at PEN America’s annual holiday card-writing event, at which we send season’s greetings to over 150 writers and journalists who are in prisons all over the world.  We send them the message that their fellow writers have not forgotten about them, and will continue to demand their rights and liberties until the day they walk free.

It is deeply unsettling that on a night when our attention is focused on writers imprisoned for expressing themselves by the world’s most repressive governments, we must also worry about keeping a U.S. writer out of an American jail. We are disappointed that, more than six months  after your promise that “As long as I’m attorney general, no reporter who is doing his job is going to go to jail,” the Justice Department continues to pursue efforts to force Mr. Risen to identify his confidential source(s).

Your record and that of the Obama Administration in terms of respecting the rights of a free press is troubling. In annual press freedom evaluations by both Freedom House and Reporters Without Borders, the United States exhibited a significant decline in 2014 in its level of press freedom, dropping by 13 places in Reporters Without Borders’ rankings. Both organizations cited the Justice Department’s aggressive prosecution of national security leaks, including efforts to force journalists to identify their sources, as a main cause for the U.S. decline.  Before you leave office, you have a crucial opportunity to begin to set this right in the case of James Risen.

PEN has advocated on behalf of hundreds of journalists who have been sent to prison for doing their jobs well enough to make their governments uncomfortable.  Here at PEN American Center, we have historically done so from a position of privilege, helping colleagues to secure freedoms that we ourselves have long enjoyed at home.  We expect and demand better from the United States. Continuing the effort to compel Mr. Risen to testify would cement the Obama Administration’s legacy as one of the most hostile to press freedom in U.S. history, offering comfort to authoritarian regimes that their attacks on press freedom are likewise justified.

James Risen has lived under this threat for seven years. You can end this today. We call upon you to immediately and unconditionally end the Justice Department’s efforts to force Mr. Risen to identify his source(s). Doing so would be a welcome and much needed first step to restore the United States’ reputation as a stalwart defender of a free press worldwide.