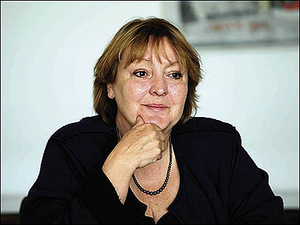 This fall Dubravka Ugrešić was awarded the Jean Améry Award for Essay Writing. I was asked to deliver the laudation. The ceremony took place in Frankfurt at the Steigenberger Frankfurter Hof, the famous hotel where the big and more traditional publishers throw their parties during the annual book fair.

Jean Améry (born Hans Mayer) was a completely assimilated Austrian Jew who fled to Belgium in 1938. There he joined the resistance and was captured by the Gestapo. First he was tortured and then he was sent to Auschwitz.

After the war, he wrote under the pen name Jean Améry. His essays describe his wartime experiences and question what it means to be Jewish when this identity is forced upon you. His writings are not as well-known as Primo Levi’s, but nobody has written with as much insight and intelligence about torture as Améry. (I understand that there is some irony in the notion of writing intelligently about torture, but there is some irony in all writing about wartime experiences; the aesthetic demands of literature and the cruelty of war are an uncomfortable combination.)

Améry very much wanted to be a novelist and he wrote a novel about Charles Bovary, Emma Bovary’s husband, which failed. (Also there, one can discover a certain ironic twist.)

Dubravka Ugrešić is a Croatian writer who lives in Amsterdam. Although she has written a few novels, she is best known for her essays. She observes her surroundings with a keen eye, and she combines irony with engagement. Some people tend to believe that irony is the enemy of engagement, but engagement without irony is fundamentalism.

To give an example of this ironic engagement, take a look at this sentence, typical for Ugrešić : “Intellectuals are… only people who badly want to be needed by someone.”

This is an excuse, or at least an explanation, for the behavior of many an intellectual. But since Ugrešić herself is obviously an intellectual, she reflects on her own position.

Or take this sentence on contemporary literature: “Contemporary, market-oriented literature is realistic, optimistic, cheerful, sexy, explicitly or implicitly didactic, and aimed at a broad reading public. As such, it contributes to retraining and reeducation, in the spirit of the personal triumph of the good person over the bad. As such, it is social-realistic. It is merely less boring than its Soviet-Russian predecessor.”

It might be clear by now why Ugrešić manages to infuriate people, which is a side effect of a good essay. If nobody is infuriated, it probably wasn’t worth reading.

And then I haven’t even mentioned the reactions to her writings in her homeland of Croatia.

But she also managed to upset a few Americans. Paul Goldberg wrote in the New York Times about her book, Have A Nice Day: From the Balkan War to the American Dream. “Judging by this book, Ms. Ugrešić  saw little of the United States, made few friendships of any depth and watched television a lot. However, we do learn that at one point she developed an attraction to a jogger she observed from her window,” he wrote.

Well, as the initiator of the Améry award, the Austrian novelist Robert Menasse said: “A good essay doesn’t comfort the reader. That’s how we can recognize the good essay.”

And indeed, it’s not comfort that Ugrešić is aiming for.

Her latest book in the U.S. is Karaoke Culture, published by Open Letter.