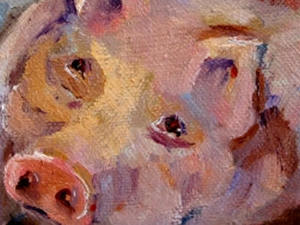 A man walks into a bar and orders a drink.
The bartender says, “We’re out of drinks.
I’ll go get some more. Wait here.”

So the bartender goes and the man waits.
It’s early afternoon, and it’s not all that nice outside,
plus he’s got nowhere else to be. But then

it’s late afternoon, and soon it’s evening-time.
Other patrons enter the bar, but the man warns them off.
“You go on ahead,” he says, “I’ve got to wait here.”

A priest,
a rabbi,
and a momentary lack of judgment walk into a bar

and pay their whole lives
for the crimes of a few minutes.

A duck, a dog, and a Marine Lieutenant
dress up like

an Iraqi, the Pope, and this half-gay four-year-old
and walk into a bar

and the bartender is Jesus Christ.
“What’s with the cross?”

asks the Pope, obviously inebriated.
“What’s with the,” the wounded Christ says

“what’s with…”
The Pope, Billy Graham, and Oral Roberts
chew fingers off of inmates in Virginia.
What’s with that?

Two men walk into a bar, and the first man is snuffed out while his mother is shackled to a bed with a sheet up so she can’t see her baby she just gave birth to. “What’ll you have?”
“I’ll have
plastic bags filled with feces and urine dumped all over the sleeping man and his bed.”
So the deputy says, “…I didn’t hear you say ‘please.’”

A man walks into a bar and wakes up
in a waterbed. The bartender is sweeping
a dust-rag over the bar and coos, “Good morning,
lil’ lamby, it’s wake-up time.” The alarm is

going off, but the man orders an imported beer
rolls onto his side
and tucks the sheets over his face. The bed
rocks him back and forth
like in the arms of radio waves. “What’ll you

and there’s a little egg of blood just floating there,

and the little girl

A fish walks into a bar and asks for a glass of water.
I saw it. It was weird.

A man walks into a bar and asks if they’ve got any helicopter-flavored potato chips.
“No, we’ve just got plane.”
A man walks into an airport bar and orders a round for all the assholes. “What’ll you have?” asks the bartender.
“No,” the man says, “What’ll you have?”
“Oh,” the bartender says, “I’m all set. I’ve got what I need. It’s like, I have friends. I have a few close ones, and a lot of just-close ones.
“It’s easy to connect with people, but you wonder if they humor you, if you entertain them.
“I’m scared I like my friends too much. I’m scared I could love them to where they get bored of me. I’m scared it’s the idea of me that they like, that I’m the stain of an older, dead me.
“The longer I have a friend the more I worry that. As I blur from their image of me… is it really like that?”

Thirty black guys and a man shot for sport in Virginia walk into a airplane hanger. An inmate’s head is stomped on until he soils himself, and that’s the happy hour special. “I’ll have what she’s having,” the bartender says, looking at his girlfriend dressed up like a deputy.
The baby starts ringing behind the bar,
so the man, bored and thirsty,

It’s happy hour, and if you buy one beer you get a glass of pig’s blood for free. Jesus walks into a pig pen with a captive bolt pistol and then opts instead to use the powder-actuated nail gun. The prisoners are crawling over each other and sweating and squealing every prayer they’ve ever learned, but none of these will work. “Please,” they beg, “please.”

A man walks into a bar just after he’s pleasured his wife. “You sure look proud of yourself,” the bartender says as he pushes the man’s face down onto the antique wooden bar and lines up the nail gun to the junction of the brain and the brain stem, “what’s with that smile?”
“My wife,” the man says, grimacing at himself in the immaculate and tear-streaked wood, “came so hard her cries shattered all the beer mugs.”
“That’s nothing,” says the bartender,

A Mexican, a European, and a Virginian walk into a bar and see a man wearing a robe and sandals turning water into pig’s blood.

The Mexican crosses himself, and gets down on one knee, and orders a pint.

The European, figuring it out, also crosses himself, and gets down on one knee, and orders a flight.

The Virginian looks at these other two, scratches his head, and says, “Hello? Hello? I need an ambulance—”

One duck walks into a bar and the second duck ducks.

“My, oh my god Anna?—Anna—Look at me honey come on my daughter she’s been hurt”

So the other patrons look at him and say:

Everything you said sounds great and if there’s anything left to decide just tell me what to do.

Everything you said sounds great and if there’s anything else just let me know what to do.

Everything you said sounds great, if there’s anything else just let me know.

I’ve thought deeply about what you said.

I should say, I love it.