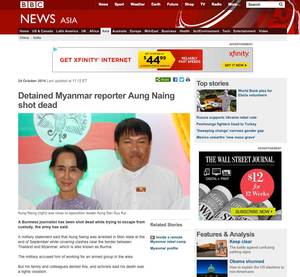 Myanmar journalist Aung Naing was shot and buried by the military on October 4, allegedly as he tried to escape custody.

Naing, who was close to opposition leader Aung San Suu Kyi  and reported on ongoing armed conflicts in Myanmar, had been detained on spurious accusations that he was part of an armed rebel group in Karen province when he allegedly tried to flee.  His colleagues and family vehemently deny that he was anything more than photojournalist, and none of the rebel groups have claimed him as a member.

Naing’s death is the most severe of numerous examples in recent months of Myanmar’s disproportionate response to reporting it disfavors. Earlier this month, a Yangon court sentenced three journalists, an editor, and the owner of the privately run news journal Bi Mon Te Nay to the maximum two-year prison term under a law prohibiting “publishing statements that could cause public alarm.”  Another five journalists from Unity Journal are serving 10-year sentences for a July report on the displacement of villagers for the construction of an alleged weapons factory, and reporter Thura Thet Tin is currently serving a one-year prison sentence on charges of trespass for a report on controversies surrounding the opening of a new government school. Only two years removed from a 50-year censorship regime, Myanmar is regressing into a dangerous trend of press violations that threaten to degrade its newfound freedoms.