Dispatch from Turkey: After the Age of Dystopias 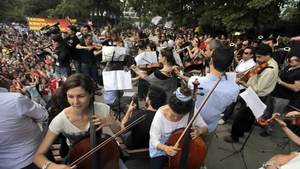 The spontaneity, courage, and creativity of the Gezi Park protests, now well into their third week, have been absolutely remarkable, and will surely teach important lessons to the AKP, the ruling conservative Islamist, though I’m not so sure about the opposition parties. The main lesson is that this movement, at its core, did not aim to topple the government (despite what the AKP says), but to change the way they govern. Of course, the movement quickly expanded to include a variety of opposition groups who do in fact want to see the end of AKP rule, but those groups were clearly identified as hijackers by participants of the movement and duly relegated to the margins.

During the protests, we witnessed a lot of wit and humor, (and vulgarity aimed at “father” (Erdoğan), a refreshing reminder that freedom of expression is alive in Turkey. But I think it is safe to say that no matter how much freedom of expression is curtailed, people always find a way to speak their minds if they know what’s going on and if they care about it sufficiently.

But several elements of the protests worry me. First, the Turkish media utterly failed at presenting timely and objective information about the protests throughout the process, and continue to act as mouthpieces of the government. Similar to other recent protests and demonstrations around the world, the Gezi Park movement turned to social media to help coordinate events and to share and spread information. This proved inefficient at times considering all the misinformation/ disinformation being circulated. As a result, a majority of the Turkish population had no idea what was really going on—for them, it looked like a bunch of big city kids were causing trouble, destroying public property.

Second, environmental concerns and police brutality are very important issues in Turkey, but what happened at Gezi Park is not the first or the gravest of recent examples. The fact that there exist greater violations to freedom of expression that did not stir those participating in the Gezi movement should be a concern, and a warning about the future popularity of the movement. It became clear early on that the protests were not about the trees in the park, but about the high-handed police measures against “good kids.”People were outraged by police violence and attacks on obviously peaceful demonstrators. But now, today, the movement seems to neglect pursuing the issue.

This may be because the movement is regrouping. After Gezi Park was declared off-limits to the general public, the movement began to organize neighborhood forums in other parks, very much in the spirit of Greek city-states (with the welcome addition of women). These forums are spreading rapidly throughout the country, and most have adapted a rudimentary form of Robert’s Rules to run structured meetings with agendas, speeches, the show of hands, and the hammering out of resolutions. They strive to achieve coordination among themselves through the use of Facebook and other more conventional means. What we see here is a certain segment of society—basically, young urban professionals and students finding their political voice, and it is already clear that from now on they will speak up more. This is extremely important, because they don’t have knee-jerk reactions against the Muslim majority, and are not married to Atatürk. In short, they represent a way forward at a time when the CHP, the oldest political party in Turky, and the major opposition, does not. Whether this will translate into a more organized form of opposition with a wider base of social and political concerns remains to be seen.

Discussing this movement only in terms of political considerations and freedom of speech, however, would ignore the deeper and more universal meaning. For a short period of 15 days, a sort of commune was set up in the heart of Istanbul, at Gezi Park, where the sky was clear and the weather was warm, where food, drinks, books, yoga classes, workshops, private tutors, and concerts arrived from nowhere, and where everything was shared, including the regular work to cleanup park in the morning. Those 15 days left an indelible mark not only on the members of the impromptu commune, but also on the older outsiders of a more cynical inclination, who nonetheless couldn’t help but watch the park and its people in awe. It was too good to be true, and it is no more, but it served to remind us how innocence-deprived we have become, both as individuals and as a society. That sort of innocence, good will, and basic common courtesy has become a very rare commodity in today’s urban settings, and this episode has reminded many how beautiful that innocence can be.

The other universal aspect of the Gezi movement is admittedly more grandiose, and harkens back to the centuries-old discussion on free will vs. predestination. In a world where your government controls or tries to control all aspects of your personal life, and where your government itself is controlled by more powerful governments that are in turn controlled by unelected global oligarchs, ordinary people rightly feel they have no power at all. What once was God has now become the global conspiracy. The Gezi movement was a hiccup in the order of things—it reminded people that it is possible to take back control, albeit a limited amount for a limited time at quite some cost. This is no mean feat after the 20th century, the age of dystopias, and taken together with similar movements all over the globe (see, for example, Marina Araujo’s account of the demonstrations in Brazil; many of the material details are very similar to those in Turkey), may in fact signal the rise of a new age – the age where the construction, or at least the contemplation, of utopias becomes possible once more; only this time, theseutopias will most likely be “unordered” ones, as opposed to the orderly utopias of Modernity.

Cem Akaş was born in Mannheim, Germany in 1968. A former Fulbright scholar, he has degrees in chemical engineering (MS), political science (MA), and Turkish history (PhD). He is a novelist, translator, and publisher, and lives in Istanbul.