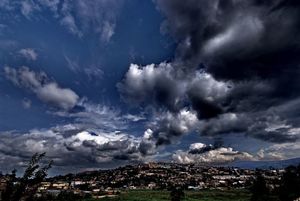 This piece was submitted by Odile Cazenave as part of the 2015 PEN World Voices Online Anthology.

Odile Cazenave’s event: In and Out of Africa.

Disenchantment with postindependence regimes has been at the root of the plurality of aesthetics that have emerged in African literature in the last 20 years, bearing direct implications on the art of storytelling, the role of the writer/storyteller and the position/ing of the reader/audience.

Taking the Senegalese Boubacar Boris Diop’s and the Ivorian Véronique Tadjo’s writings as departing points, this article proposes to discuss how each author redefines the notion of tale and storytelling; how through Le Cavalier et son ombre (1996), Murambi (2000), and Kaveena (2006), Boubacar Boris Diop invites us to reassess the power of Aesopic writing, and the ties between aesthetics and the political; how Véronique Tadjo, rewriting foundational myths and tales, as for instance in Le Royaume aveugle (1988), L’Ombre d’Imana (2000) and Reine Pokou (2006), is enabled to relate a traditional story to the present situation of postcolonial authoritarian regimes, the 1994 genocide in Rwanda, or the political crisis in Ivory Coast.

Engaged with renewing the politics of form, both authors, I argue, become representative of a new generation of African writers, Francophones and Anglophones, rethinking the artistic practice of storytelling in very exciting ways.

Boubacar Boris Diop’s oeuvre demonstrates a long practice of writing about memory, whereby narrator or protagonist embarks on a quest to recover someone who, or something that, disappeared.[1] From Le Temps de Tamango (1981) to Les Tambours de la mémoire (1987) to Les Traces de la meute (1994) to Le Cavalier et son ombre (1997), the author typically uses a combination of narrative voices and protagonists trying to find a lost link. Le Cavalier et son ombre raises the question of searching for and confronting the past, looking at African heroes and reflecting on who best embodied African values in pre-colonial Africa. In this text, the narrator, Lat-Sukabe, searches for Khadidja, his former lover. Going south, he embarks on a journey that tests both his personal values and those of his people. Le Cavalier et son ombre is a beautiful demonstration of the art of storytelling in which the magic and the real cohabit, intertwine, coincide, and intersect at several points. The shift in narrative viewpoints invites the reader to constantly reassess her/his interpretation and understanding of the unfolding of plot. A series of tales within the tale, the novel is a memorial opus, raising philosophical questions about the African past (the mistakes of history, what defines a hero or heroine, who the African heroes are), the present (civil wars and genocide) and the future (looking for Tunda, the child who will bring hope).

Textually, the encounter between facts and fiction raises the question of choice of modes of fiction, but also of the “régime éthique des images” (ethical system of images) and of the “partages du représentable et de l’irreprésentable” (the sharing out of what can, and cannot, be represented), of “l’intraitable/irrachetable” (the unthinkable/unredeemable) as a characteristics of postmodern art, to use Rancière’s terminology and its implications with regards to the visibility of arts.[2]

In that respect, Diop’s Murambi, le livre des ossements (2000)[6] not only participates in the reconstruction of collective memory, but also contributes to redefining simultaneously the nature of “d’irréalité et de montage des mots”[7] (unreal and edited construction of words) and that of “effet de réel;” (the literary illusion of reality). This also means pushing further the limits of the unbearable, the unfathomable, the unspeakable, while at the same time reconfiguring the “territoire du visible, du pensable et du possible”[8] (the territory of the visible, of what is thinkable and possible). In doing so, Boubacar Boris Diop, with the writers engaged in the Duty of Memory Project, pushes the limits of African literature and renews the meaning of the engagé writer.

Diop’s participation in the Duty of Memory Project has had long-term consequences on his writing. Short-term-wise, it has meant a need to return to his mother tongue, and resulted in the publication of a novel in Wolof, Doomi Golo, which he explains in his essay, “Ecris…et tais-toi”,[9] (Write and…Shut up) as well as a collection of poems, his exploration of the past and history of Rwanda has also had a more enduring consequence. Published in 2006, Kaveena represents a turning point in his writing, both in terms of looking at Africa’s recent past, especially Senegal, and the ways he renews his writing: the quest has become an investigation. The usual blurred geographic and timeframes enable the reader to both identify the disenchanted postcolonial Africa of the last 20 years, and to zoom on a specific country, either Cameroon or Senegal, and recognize in the persona of the white character a Jacques Foccard or a Jean Colin.[10]

In his archeology and digging of silenced history, in his representation of political conniving between African states and France, as well as “faits divers” like the young Kaveena’s horrible murdering, Boubacar Boris Diop’s writing of violence and suffering raises the question of new modes of representation of history, and ultimately, of new forms of aesthetics.

A poet, a novelist, a writer of children’s literature, Véronique Tadjo is also a painter. Born in Paris in 1956 and raised in Ivory Coast, she travelled extensively both during her childhood and as an adult. A professor of English literature, she taught in Nigeria, and at the University of Abidjan in Ivory Coast until 1993. Since then, she has been devoting her time completely to writing and painting. In the past decade, she has lived in anglophone countries: Kenya, England, and currently, South Africa.

Véronique Tadjo is part of a generation of African women writers who, since the mid-eighties, have contributed to shaking the norms of the African novel, and are in search of an alternative vision, of a more promising Africa. One of the striking features of her writing is that her works mostly embrace an Africa that goes beyond the usual compartmentalization of the francophone and anglophone worlds. Until Reine Pokou, none of her works were anchored in the geographical or cultural space of Ivory Coast (and for Reine Pokou, we will see how this still needs to be qualified).

From À vol d’oiseau (1986) to À mi-chemin (2000), Tadjo demonstrates the necessity of love in order to confront a world that is falling apart. She poses the search for a new man as equal partner with a new woman, a condition for the successful creation of a better world. By revisiting the mythical elements of hubris and blindness in Le Royaume aveugle (1988), Tadjo examines the direction Africa has engaged in and focuses on a search for possible solutions. Using horror and abjection as catalysts, she forces her readers to confront the abuse of power, corruption, and greed.

À mi-chemin (2000) continues to explore in the poetic mode the meaning of love, of memory, of the memory of love. The body is declined in its beauty, in its ageing process, in its emotions, in its movement. Through the writing of the body and of love, Tadjo ponders on the mechanisms that help “apprendre à se quitter sans se perdre”[11] (learn to leave without losing one another).

Looking at the possible departing and arrival points of the journey of life, of the crossroads one can find oneself at, Tadjo pursues her same indefatigable quest of trying to find a sense of meaning and identity in a world that appears more and more meaningless, indifferent. It is a quest of love, of understanding the journey of life. At times a poetry of pain and anxiety, of disillusion and deception, it is first and foremost a poetry of love, acceptance, and hope.

One of her most recent works, L’ombre d’Imana, Voyages jusqu’au bout du Rwanda (2000), which was part of the Duty of Memory Project, marks a new step in the visionary quality of her work.

The commitment to exploring the past in all its mistakes, its atrocities, and to help fostering a reconciliation with African collective memories, is part of Tadjo’s journey in this text. As an unusual travelogue, it goes beyond the specificity of the 1994 Rwandan Genocide to reflect on the post-traumatic consequences of any genocide, of systematic politics of extermination or exclusion, questions about victims and perpetrators. Tadjo interrogates the relationship between individual and collective memory, between memory and history. In asking what an entire people’s memory is made of, she is also asking about the possibilities of memorialization and reconciliation. [12]

For Véronique Tadjo L’ombre d’Imana represents a departure from a writing that has, characteristically, been anchored in a space that can be loosely defined as Africa and the time of the myth (as in Le Royaume aveugle).

In turn, writing about the 1994 genocide in Rwanda and posing questions about the whys and hows, pushed her to examine a context closer to home with Reine Pokou. But she does so, using the narrative structuring of the myth, not just any myth but the foundational myth about the origins of the Baoulé Kingdom, descendants of the Akan from neighboring present-day Ghana.

Reflecting on the meaning of rituals, of legends and myth, she proceeds to think of other possible scenarios and ways to re-write the legend.[13]

[1] I presented part of this development [argumentat the colloquium ‘Literature and the Arts in Senegal: Birago Diop and Léopold Sédar Senghor, Then and Now’, Indiana University, IN (28 March–1April 2007).

[6] The author was one of the writer participants in the Duty of Memory Project in Rwanda, which involved a three-month residency in Rwanda in 1998 and resulted in the publication of Murambi; nine other African writers took part in the project.

[10] Both have been prominent French figures acting as consultants for African countries, Foccard more specifically for Cameroun, and Colin for Senegal.

[13] I presented a more in-depth analysis of this aspect in Accra, Ghana, at the African Literature Association in 2006 under the title ‘Writing (and Painting) from Joburg: Toward New Aesthetics of Commitment’.

This piece was previously published by Cambridge Scholars Publishing in 2012.