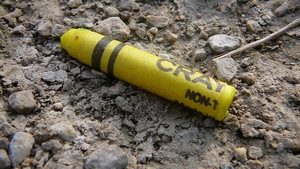 Dark Love is translated from the original Czech.

So then, how we met: yes.—I was walking, that is, they told me—no: I thought—it was simply written somewhere—I don’t know—it doesn’t matter—that this way, that’s my path—that way and then onwards, that’s the direction—this way and then onwards, after, not now: now it’s only like, nothing serious, just preparation, self-improvement and such—but happiness is what only comes when I deserve it and I’ll try my best at what only comes after, at that life, that happiness the way we know and want it to be—

a white house with big windows, a porch, and in front freshly green grass and on it a white table and chairs, and sitting at the table is him, statuesque and robust, broad shoulders, big white teeth—fans of laugh lines, you know, a soft knit sweater that’s lovely to hug—and a touch of gray at the temples

and he holds me and smiles at me—and I smile at him, across the green lawn two scrubbed and laughing children run to us to hug us and tuck into the coffee—the babovka cake—the body spray—to the side and rear stands a new car—also financed—

Just comfort, love, and embraces—all of that will be, but later. Now I’ve got to tend to myself and rub this cream on my lips, everything else will come on its own—

So anyway, I was walking—

and there was this shack and inside a net and in the net him, filthy and sweaty, writhing in the net and chains, stretching out his hands to me and moaning and begging and calling me by my name and he was so abandoned and alone—

and my strange I said, do you see him? how unhappy he is? are you just going to leave him there like that? when he’s begging you? his life depends on you now! what are you going to do about it? well…?

And so I started to get him out of the net, because it’s got to be done, not thinking of ourselves and helping our neighbor and such, so we’ll be good for something, so someone will love us, so we’ll get an A from God—

I untangled the knots and loosened the chains, I struggled to free him from that net until finally he was out—

and I was inside—

and he stood and threw a blanket over me.

I screamed, just what do you think you’re doing, you idiot? I mean I helped you, let me out!

Fine then: what do you want? To rape me? Rob me? Well do it then, what are you waiting for?

Hey, what’s your game? Do you want to talk? Well fine, take this scrap metal off me and we’ll have a chat: are you lonely? No wonder, in this hole—is all this yours? this shack? did you build it yourself? and you live here? by yourself? do you have a family somewhere? any kind of a family? can’t you speak? well then at least nod if you understand me, dammit!—hey, if you’re dumb, if you’ve got some kind of problem, we can still communicate…

Well so you’ve got me—what for?

So beat me or rape me, shout! Say something, don’t just gawk!

Know what you are? I’ll tell you what you are, you’re a shit, do you hear me?! Some kind of sadistic little shit!

And untie me. It hurts! Do you hear, it hurts! Untie me or—okay fine: please! I’m begging you, would you be so kind as to untie me? Please!

Well fine—you’ve got me on the ground, tied up, on the filthy floorboards, and I’m crying…are you happy? is that what you wanted?

I spoke to him, begged, cried, desperately, deviously, cruelly—and he kept silent, immobile and silent—expressionless, he stood stock-still silently silent—there’s an awful strength in that, doctor, not reacting. Not doing anything. Horrendous power…

When I finally quieted down, he went off a little ways somewhere back in the dark to attend to his toys. And I lay there, tied up under the blanket—not a peep, not a movement.

He scrawls something on a piece of paper without even looking at me. He scrawls relentlessly, scrawls and scrawls and all the while pants furiously, his breath quickens as he presses on the crayons, on those stupid crayons of his, grinding down the carefully sharpened tips, damn you’re strong, man, with the remaining bits he hacks through the paper, relentlessly and angrily breaks his stupid crayons, then throws them aside and grabs new ones, whimpers, drools, gnashes his teeth and pants, crushes, destroys the paper, that enemy he’s triumphing over, until only shreds remain that he pulls apart and assails with his fists and sweeps to the floor. Sweating, he pants with exhaustion. Then he stands and comes over to kick me with all his might.

I lie there, tied up under the blanket, hurting from the kick and gasping for breath and my strange I says to me: see, now he’s satisfied; that’s how it should be, thanks to you he feels better, you helped him, and now he’ll make you happy, just like in fairy tales…

Corine Tachtiris translates primarily contemporary women authors from the Czech Republic, Africa, and the Caribbean. Her translations and scholarly articles on world literature have appeared in Callaloo, The Stockholm Review, The Comparatist, Metamorphoses, and Legs et littérature, among others. She has taught translation theory and practice at Hampshire College, Kalamazoo College, and the Université Paris Diderot, and from this fall she will be assistant professor of literature at Antioch College.

Michigan’s largest local news website has ended its comments section saying moderators have to spend too much time policing them.
https://bit.ly/2v2dLYq

Sharing threats made by someone else could soon become a punishable offense in Germany, after the government approved a bill Wednesday designed to crack down on hate speech and online extremism.
https://bit.ly/37Ds7Md