DARE: White Supremacists Are Planning a Second ‘Unite the Right’ Rally in D.C. 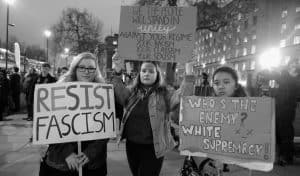 White Supremacists Are Planning a Second ‘Unite the Right’ Rally in D.C.
White-nationalist, paramilitary, and other right-wing groups are planning once again to come together for a (second-anniversary) rally in Washington, D.C. Activists have already started to speak up about their intention to stand up to the explicit displays of racism and fascism on the right this weekend.
THE CUT

White Nationalists Are Coming to D.C. Here’s the Best Way to Protest
“There are plenty of creative, life-affirming ways to resist white supremacist groups that do not involve shouting matches, street fights or doing nothing. Mobilizing a counter-rally needs to be backed by sustained organizing to seriously challenge racism and white supremacy in the United States.”
WASHINGTON POST

Emmett Till Sign Hit with Bullets After Being Replaced—Again
A sign dedicated to the life of Emmett Till has been vandalized in Mississippi just 35 days after being replaced. This is reportedly the fourth time the sign has been vandalized since it was installed in 2013. “We have already begun plans to replace the sign” co-founder Patrick Weems said.
CBS NEWS

Berkeley Police Under Fire for Publishing Anti-Fascist Activists’ Names and Photos
Berkeley police have arrested more than a dozen anti-fascist activists and posted their names and photos on Twitter, raising concerns that the department was encouraging harassment and abuse. Critics have accused police of aiding the far right and endangering counter-protesters with “public shaming” and targeted arrests.
THE GUARDIAN

Kushner Personally Asked for Stories to be Deleted at His Past Newspaper
White House senior adviser Jared Kushner ordered the removal of stories in the New York Observer about his friends and peers when he owned the paper, according to a Buzzfeed News report. Kushner, who had owned the Observer since 2006, stepped down as publisher of the newspaper in January to become a senior adviser to Trump.
THE HILL

Saudi Arabia Has Expelled the Canadian Ambassador and is Freezing New Trade with the Country in an Escalating Feud Over Human Rights
Saudi Arabia has expelled Canada’s ambassador and frozen all trade and investment with Ottawa over an escalating dispute centered on jailed human rights activists. Global Affairs Canada tweeted that it was “gravely concerned” about a new wave of arrests of women’s rights activists in the Kingdom.
BUSINESS INSIDER

Turkey Sliding into Fascism, Says Exiled Novelist
Award-winning author Aslı Erdoğan warns that Turkey’s institutions are “in a state of total collapse,” and the country the country where she spent four months in prison is sliding into fascism. After several journalists were sentenced to life terms, Aslı Erdoğan has given up hope of being acquitted and returning to Turkey anytime soon.
AHVAL NEWS

Indian Authority Challenged Over Monitoring Social Media
The Indian government body in charge of a new digital program is being heavily criticized by the public over fears of intruding into people’s right to privacy. Legislature Mahua Moitra, has petitioned the Indian Supreme Court to challenge the Unique Identification Authority of India’s (UIDAI) plan to trawl social media.
ASIA TIMES

Christopher Robin: Winnie the Pooh Film Denied Release in China
Chinese authorities have been blocking images of Pooh on social media since last year, after the bear became a symbol of political dissent. Chinese leader Xi Jinping has been compared to the bear. As the memes grew popularity, Chinese censors began blocking images, GIFs and mentions of the bear across social media.
BBC NEWS