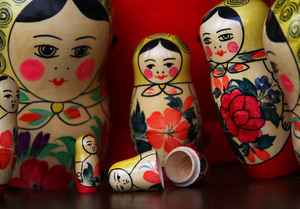 Jake is five when Lai comes home. She’s bigger than him and so he thinks for a long time she’s older. At night, Lai sleeps beside him on the pull out couch and Jake holds her wrist and feels protected. The shadows that loom over them at night, the ones that caress them roughly, that piss loudly in the bathroom, none of it bothers him as much. This is because Lai and he are a pair, they go together, her a shield, him a dagger. Except he’s not a very good dagger because all he does is hide behind the shield.

“Fat, slow, stupid,” he drawls. He towers over Lai like a mountain over a molehill. “Where’d you find this beauty?”

Blood and pity links Mamma to her best friend Dee’s sister who married a Chinese gambler. He left her high and dry with Lai, born early and fevered. It should have been Dee who took Lai. That or child services, but Dee didn’t have a bone of mothering in her and Mamma knew it, saw her shifting eyes, saw where it’d go. So she took Lai on because she already had Jake and they could take care of each other.

The girls at the joint Mamma worked at pitched in with their tips as often as they could, folded notes, slick and numberless, Dee with the heaviest hand, and no one said anything else.

“Shut the fuck up,” Mamma says to the man in her hard velvet way. “You’d know fat, slow, and stupid first hand.”

He backhands Mamma and Jake makes a sound without knowing. Lai pushes him behind her, so familiar a motion they stand like that sometimes, Lai in front, Jake in back. Mamma doesn’t move. She laughs.

“Clear out, Johnny. I got enough to deal with feeding two hungries and myself. Plus work isn’t gonna like any bruising.”

She turns to glower in the rusted mirror by the kitchen sink. Even in the dim light, Mamma is beautiful. Waterfall hair, shining eyes.

The man rears at Mamma and she comes alive. Her hands come forward like a cobra hood, arms lashing out. It happens so fast the man has no time to react. He’s on his back in the next click. Before he even sits up, she has the kitchen knife in her hand.

“I wasn’t joking. It don’t matter if I don’t throw this right. I’m going for your jewels. It’ll hurt any which way.”

The man scrapes up heavily and goes. Mamma drops the knife in the dish rack. “Get me some ice,” Mamma says.

After a second, she looks at them standing in the corner.

“And the kitchen towel.”

Jake stays where he is. Mamma is looking at him, and it’s that look he loves even though he knows she isn’t really seeing him. He’s part of the landscape, inside her inner eye. She snaps out of it when Lai brings the ice, and switches on the TV. The familiar nasal accents, the taunting words fill the room.

“When you have to shoot, shoot.” Clint Eastwood sharps from the TV.

“Knife,” he whispers back.

From behind, Mamma’s hand settles on Jake’s head, and he thinks it’s perfect right now, the three of them. But just a few weeks later, the man is back, tree trunk tall, voice like leaves. He’s sitting on the divan, Mamma on his lap, giggling. That’s when Lai stops saying sorry. She never says it again.