PEN America’s Children’s and Young Adult Books (CYAB) Committee support writers and librarians whose books have been banned or challenged. The committee is chaired by Paul Zelinsky and Krystyna Poray Goddu and has monthly meetings which include passionate give-and-take conversations about topics that affect writers of children’s literature.

The CYAB Committee is proud to have been part of PEN America for nearly half of the organization’s 100-year history. The Committee created this short video, produced by Julie Gribble of KidLit TV, in the summer of 2022, to accompany PEN’s centenary celebration. In the video, we share our guiding principles and efforts on behalf of writers and readers of books for young people.

The CYAB co-curates annual events at the PEN World Voices Festival and often at the Brooklyn Book Festival. Books written for children and young adults are among the most frequently contested by groups wishing to remove them from libraries and school curricula. 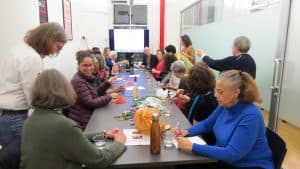 The committee works with the Coalition Against Censorship to co-sign letters and defend writers whose books are challenged in this way. Committee outreach to underserved communities includes its sponsorship of author visits to the Martin Luther King Jr. School for Science and Technology in New Orleans and to youth detention centers in the New York area in cooperation with Literacy for Incarcerated Teens (LIT).

The committee hosts the ongoing PEN Pals interview series, which gives voice to the challenged creators of books for children and young adults through an exchange of nuanced conversations that illuminate today’s issues. We are eager to receive information about topics that affect writers of children’s literature so that we can respond to them promptly.

If you would like to join the committee or receive news related to Children’s and Young Adult Books and Authors, write to [email protected] for more information. 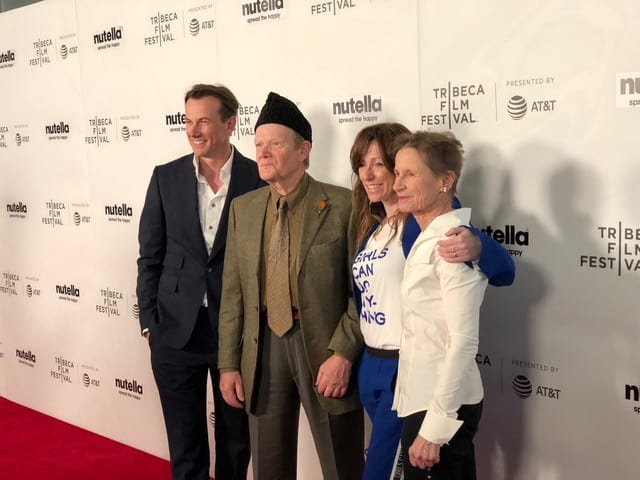 The film adaptation of Emily Arnold McCully’s Mirette on the High Wire was recently screened at the Tribeca Film Festival. Here Emily is feature on the red carpet at the festival with producer Michael Stanish, Philippe Petit, and director Helen O’Hanlon.

Committee member Lyn Miller-Lachmann regularly features PEN America events and campaigns on her blog. Check out some of her posts!

The Children’s and YA Books Committee was well-represented at the 2018 World Voices Festival Next Generation Now program. Committee co-chair Fatima Shaik moderated the panel, “What Shall We Tell the Children?” The panel focused on the question: “As authors and as caregivers and teachers, what do we tell the children about the current political situation?” The panel featured editor Wade Hudson, writer Tonya Bolden, and visual artists Innosanto Nagara and Eric Velasquez. They shared their perspectives on the ways in which children grapple with difficult political situations and times of controversy and danger. Panelists also discussed how to write on and speak about the current political climate with children and young adults, as artists, teachers, parents and grandparents. Check out committee member Lyn Miller-Lachmann’s blog post about the event: “What Shall We Tell the Children?”

Thoughts from the Committee

The PEN Children’s and Young Adult Books Committee planned a panel for World Voices 2020 called Good Grief Government! to explore the ways to talk to children when the state is clearly in the wrong. Laws enacted before the era of modern Civil Rights relegated blacks to second-class citizenship and abetted terrorism. More recently a president was impeached and resigned for condoning theft (Nixon).

Unfortunately, we are living the errors of government in real-time again. No doubt, the actions of individuals execute the lack of moral compass from the top. How we explain this to our children in ways they can understand will depend on individuals too—mothers and fathers, caregivers, and teachers.

The CYAB has recommended books to provide comfort and teach resilience in the time of coronavirus.

Here too are books that teach about racism and justice from the authors Jason Reynolds and Ibram X. Kendi for YA, and for younger children.  These lists from Embrace Race are also good starting points.

Right now after, weeks of sequential murders of blacks viewed on all platforms, caregivers may want to limit children’s exposure to “the pornography of black death,” as Dr. Michael Eric Dyson called the replaying of murders on video for all to see and normalize. At the same time, we need to create an expectation of justice in children and young adults. PEN America exists at the juncture of human rights and literature, so the CYAB stands for the rights to protest, report, compose, and publish. You can also access other social justice organizations both established like the NAACP and more recent like the Equal Justice Initiative and Black Lives Matter. Inform yourself to speak knowledgeably to your children.

One thing is true: Our youth will see our responses and follow them. We will model a commitment to justice or to indifference. In the latter, we feel sorry for “others” and even shake our heads in the quarantined comfort of our homes. In the former, we march, donate, make phone calls, and write to change public opinion. We can bring our children into the voting booth or let them see the mail-in ballots. If we involve our children in pro-active justice, they will come along. They empathize first with us. If we care about others, they will too. Where our hearts lie, so do our children’s characters. – Committee member Fatima Shaik and CYAB co-chair Paul Zelinsky

On the Separation of Families at the US Border

“As authors and illustrators dedicated to serving the needs of children through words and images and to the support of free expression, the Children’s and Young Adult Books Committee of PEN America asserts its complete opposition to the policy of separating children from their parents at the borders of the United States. This policy is badly damaging to babies and young people who have committed no crime. We join our voices with those of other writers, especially those taking action in the children’s book community, to protest this policy or any similar efforts. We reject the spirit of violence enacted against innocents for any reason.” –Members of the PEN America CYAB Committee

On the March for Our Lives

The children of the United States are once again going on the front line of protests in the March 24 national day of resistance called March for Our Lives to take place in Washington, D.C. Inspired by the young people of Parkland, Florida, who saw their classmates gunned down, the march is a statement about youth and our national values.

The children are telling us to look away from our iPads, bank statements, and even our jobs to put the focus on them. Maybe we’ve been hoping that things will all work out without us. They won’t. Maybe we think our families are not at risk. They are. Maybe the black lives we saw on television shot in the back, in the car, and without any mercy were just a prelude to the white lives being taken down by weaponry not meant to enter the streets or the schools. Of course, they were. Pay attention, our children are asking.

This is not the first time that American children stood before government officials and demanded action. I was a child in the South when young men and women only a few years older than me sat at lunch counters and were beaten, boarded buses that were attacked, and stood patiently while dogs lunged at them and water cannons knocked them down. They were the vanguard of the Civil Rights movement in the 1960s and they won. They helped changed the lives of everyone in this country – gays, women, immigrants of color, and even the people who still hate blacks and unwittingly use black dialects, dances and fashions.

The children of the peace movement helped shut down the Vietnam War. The children of Soweto changed South African apartheid. The number of young activists against child labor and sex trafficking, and those seeking education for their peers could make us ashamed.
Instead, we want them to know we are listening. Adults are paying attention, applauding you, and standing behind you. There are many, many of us who want you to know that we care and we’re fighting too for your lives.

The PEN America Children’s and Young Adult Book Committee supports the March for Our Lives activists and any young people who wish to speak out using their First Amendment rights. Sharing your knowledge, information, and experience can be the sincerest form of free expression.

In the 1960s Civil Rights movement, the adults had the plans. I can remember the priests, parents, and teachers who came to our houses to encourage young people to go to places where blacks were never allowed: Go integrate that school. Eat at those restaurants. Apply for that job. An army of young people following the front line did not leave our communities because we necessarily wanted to be in these new and unwelcoming places. We acted to aid the country on moral grounds. The diversity of the Parkland spokes-youth in Florida demonstrates a measure of our civil success.

The adults are behind you. There is a speech teacher in Parkland whose work with the youth is obvious. There was the high school coach who put his life on the line – one in Florida and probably many throughout the land. The PEN America Children’s and Young Adult Books authors hope that some of our ideas read by the nation’s children offered guidance to their developing minds. Many of us writers have published books that say that it is all right to speak up and all right to be who you are, and it’s not ok to bully and hurt others.

We can tell that many young people have paid attention. So now we say: Children, you enlightened children, take your stand and fight for your lives – and thank you for helping to save ours. PEN America’s authors stand with you. – Fatima Shaik

As India celebrates #RepublicDay, read this collection by prominent writers on the promises embodied in the Indian Constitution, and some of the current threats to the upholding of these rights. https://pen.org/india-at-75/ #IndiaAt75

According to @PENamerica book bans are increasing and evolving to keep even more books out of the hands of our children. But why do other people get to tell our kids, they can't read certain books? #BookBanBusters