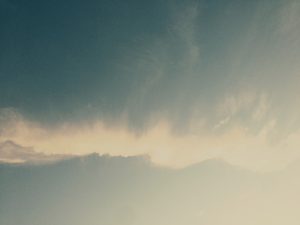 Today we feature an excerpt from Polly Barton’s grant-winning translation of The Cowards Who Looked to the Sky by Japanese author Misumi Kubo.

Barton writes: What follows is the opening passage of The Cowards Who Looked to the Sky, Misumi Kubo’s debut novel that traces the course of a schoolboy’s affair with a married woman 10 years his senior, and the footage of their cosplay sex that appears online. The narrative plays out through the voices of five different characters in turn, each casting a different angle on this central relationship and its tragic fallout.

Kubo seamlessly blends the nitty-gritty of her protagonists’ lives with their emotional landscapes to create a compendium of authentic and poignant lived experiences, unmistakably Japanese and unmistakably modern, while also spilling over with universal resonance. Each of the lives we are invited to dip into contains plenty to shock, jolt, and even scandalize the reader, and yet what I found truly arresting about this book from the first time I picked it up was less the extremity of the places it was prepared to go in the name of honesty and more the sheer force of the drive I sensed underlying those ventures: a fearsome will to expose and confront the truth.

If this sounds harrowing—well, it is and it isn’t. For the strange thing is that the bleaker things become in Kubo’s hands, somehow too the more generous her prose, as if the deeper the cuts she makes the more compassion bubbles up to fill the wound. Awaiting the reader in the pages of Cowards is an almost bottomless despair toward the state of modern Japan and the humanity-compromising demands it makes on its citizens, and yet in spite of almost everything that happens, there is also a rich, almost radical hope. For what I believe drives this immensely powerful book, and what ultimately stirred me to pick up my pen and start translating without knowing if it could ever find a home in print, is the conviction that the moment when we first confront how things really are is also the moment we can begin to take our first steps down a different path to the one we have been treading until now.

Let’s suppose that the average healthy sex life for the dimwitted kids that live around here is the kind my classmates have, which is to say, meeting up at one of your houses on your way home from school, or checking into a motel by the highway, or finding some secluded place outside, fucking twice, or three times, or as many times as you feel like, then calling it a day, going home with a fuzzy feeling in your crotch and putting on your best whatever look as you eat dinner with your family, eyes glued to the TV. If that’s true, then it seems like at some point in time I strayed pretty wildly off that path.

With the end-of-term assembly over with and my report card stuffed inside my bag, I walked out of school, past my house, crossed the bridge, and stepped into the lift of a block of flats by the river. When the lift reached the top floor, I got out and looked around, then headed toward the flat at the very end of the corridor. The door was unlocked. I opened it just enough to squeeze through the gap, and once inside, entered the door of a room off the vestibule.

The blackout curtains were drawn. It took a while for my eyes to adjust to the darkness, but my ears were alive to every little sound. Anzu was lying on a double bed, dressed in a costume of some character from an animé series. “Anzu” was the fake name she’d taken for herself; I didn’t know what her real name was. Her costume, a variation on a sailor-style school uniform, had an incredibly short skirt, and Anzu’s thighs looked like a couple of tree trunks jutting out from under it. Then there was the blonde wig with attached cat ears, also ridiculously unflattering.

As I got closer, Anzu opened her eyes a little, and pointed wordlessly to an outfit hanging by the bed. I threw off my school uniform, and slipped on the costume of another character in the animé series. It was made of some kind of silky material, and looked like a lab coat. I put on the long, blue wig that came with it, then a pair of small glasses, and stood beside the bed. I could hear a whirring sound, like the noise an electric toothbrush makes. I lifted Anzu’s very short skirt. There was a pink cord trailing out of her skimpy knickers. I tugged down her knickers until they caught around her right ankle, then bent her knees up.

Anzu gulped like she was swallowing a cupful of saliva. As I pulled slowly on the cord extending from inside her, fluid gushed out, along with the love egg, soaking the sheets to form a big wet patch.

“You’ve been waiting for me like a good girl, haven’t you?” I said.

I was now fully in the role of whoever I was supposed to be playing, so I had to come out with gross lines like that. It was part of the deal. Anzu would write a script, and I followed it to the letter. I would play the role and say the lines she’d written, and then I would get to fuck her.

Her body twitched, and her back lifted slightly off the sheets. Next, I put Anzu’s index and middle fingers in my mouth, tonguing and sucking them pervily, making as much noise as I could. That was also part of the script.

Anzu made a very unsexy UGGGH, as if she’d been kicked in the stomach.

Still sucking on Anzu’s fingers, I rolled the love egg around her clitoris. Almost immediately, Anzu cried out in a grating high-pitched voice, “Oh! I’m coming, my lord!”

“Not yet,” I said sternly, exactly as the script had instructed.

I spread Anzu’s legs apart to form an M, moved my face up close to her crotch, then stuck my middle finger inside her. It was full of see-through fluid in there, all gooey and glistening. I smeared the fluid on her clitoris, then rubbed the love egg round and round on it.

“Aaaaaah, Lord Muramasu, I can’t . . . I can’t stop—I’M COMING!” Anzu howled. She arched her back so that the flab on her lower body started trembling, then sank back flat on the bed, totally still.

Lord Muramasa was the name of the character I was cosplaying. But to tell the truth, I knew absolutely zero about him or the animé series that Anzu was into, whatever the name of it was.

“Naughty girl,” I said, as I patted her head.

When Anzu’s breathing had returned halfway to normal, she sat up on the bed and pulled down my zip. My cock had been hard pretty much since I entered the room. She put her mouth around it, coating it in her spit, then pushed me onto my back and hopped on top of me, straddling me. The room was hot enough that my cosplay glasses had steamed up. I lay on the bed, looking up at the ceiling. Anzu did all the work for the both of us, although I reached up and felt her nipples through her sailor uniform. She rode me up and down, rhythmically, going ah, ah, ah, as more and more fluid oozed from inside her, sticking in my pubes. From that position, I caught glimpses of the roll of flab on her belly and her wig, now slightly crooked, and I felt in danger of losing it. I shut my eyes tight, and concentrated on the warm, wetness inside of Anzu.

Anzu leaned down and whispered in my ear, “Come as much as you want.”

This time it wasn’t the voice of whoever from whatever. It was Anzu’s real voice. That pushed me over the edge, and I shot deep inside her.

It was at the beginning of my first year of senior high school when I first met Anzu and she, like, picked me up. It happened at Comiket, of all places, the huge Comic Market fair in Tokyo that a friend dragged me to. Anzu came up to me, told me I looked exactly like so-and-so from blah-blah-blah, took a bunch of photos of me, then practically forced my phone number out of me. Weirdly enough, she happened to live in the same part of town as me, in a block of flats directly across the river from my house. Even more surprising, though, was her age. I’d figured that she was around my age, but it turned out that she was 12 years older, and married, too. In other words, if I thought about it, I was having an affair with Anzu.

I didn’t watch animé or TV, so I didn’t know what most of the stuff Anzu said was supposed to mean. What I did know was that, as long as I was in this room, I wasn’t allowed to be my real self. I had to put on the cosplay outfits that Anzu had prepared for me. Sometimes I had to put on white face paint, and sometimes even colored contact lenses. When I was all gotten up, Anzu would look at me misty-eyed and take lots of photos with her digital camera.

The first day I came here, I half-forced Anzu backward onto the bed, not really expecting she’d agree to do it with me right away. But she did, on one condition: I had to dress up as some animé character. From that day on, I came over once or twice a week after school, I’d dress up like I was supposed to, and we’d fuck like mad, mostly without any conversation.

Anzu was the first person I’d ever done it with, so I had no idea that there were all kinds of different positions, or that you could use toys and stuff like that. I learnt all that from her. When we’d finished fucking, Anzu would—not always but often—look at me apologetically and slip me some folded-up yen notes. I didn’t really understand what the money meant, but I didn’t feel any guilt about it. To me, it was like when my aunt gave me a little pocket money or something. But after a while and the idea had been sloshing around in this stupid head of mine, it suddenly became clear to me: Anzu was paying me to fuck her.

Twice President Trump and his allies have tried to block books the public has the right to read. And twice our argument in favor of publishing has prevailed. This July 4th, support the freedom to write. https://pen.org/donate/?utm_source=mc&utm_medium=twitter&utm_campaign=trumpbooks

Rediscover a love of reading with @peworldvoices' Next Generation Now storytimes as children's and YA authors sharing the rich worlds of their novels and exercises to spark the minds of young writers. https://bit.ly/2YSetDJ