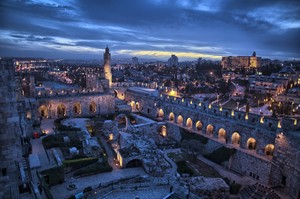 This piece was submitted by Khaled Mattawa as part of the 2014 PEN World Voices Online Anthology.

Adonis’s events: Master/Class: Adonis and Jorie Graham with Khaled Mattawa and
Opening Night: On the Edge.

Up there, up above,
Look at her dangling from the sky’s throat.
Look at her being fenced with the eyelashes of angels.
No one can go afoot toward her.
One can use his forehead, palms, perhaps his navel.
Barefoot, knock on her door.
A prophet will open it, and teach you how to walk, and how to bow.
A stage play directed by the all-powerful, the almighty.
And the lord does thus for all his sons:
—“Here I am, a silhouette of Jerusalem,”
cried a three-headed dummy on the stage, then exited.
“Jerusalem (Bait al-Maqdis) complained of its ruins to the lord
And the Lord revealed to it:
I will fill you with faces that long for you
the way doves long for their eggs.”
—“Fear God, O Ka’ab?
Does Bait al-Maqdis have a tongue?”
—“Yes, and a heart like you.”
(reported by Kaab)
A stage-play directed by the all-powerful, the almighty.
* * *
For so long I’ve begged bread to criticize salt.
Many times, I’ve heard people ask me, whispering,
“Why is death always late in Jerusalem,
while the march of life becomes another death?”
And how can a head be imprisoned
in a cellar of words it had invented?
Truly, the unknown becomes deceptive in Jerusalem,
and he is the master of all deceivers.
In a corner, in the farthest reaches of my desert,
a gazelle weeps.
* * *
Time rushing through the streets of Jerusalem,
I know your name.
I was commanded to offer you the juice of uranium.
I will tell the moon
to sign your book,
and the sun to date the signing.
And look, here are walls spilling the milk of their sadness
on your ground, celebrating you.
And Time, you know,
that the ants stand higher than all the planets:
ants spoke to Solomon,
but the planets never could.
Perhaps this is why ants can prophesy:
belts, masks, trenches, earth-movers, bombs, missiles, suitcases, tires, and electronic
brains:
these are the coming days.
Perhaps that is why
the sky has become a secret hole in history’s ceiling.
“Jerusalem, land of summoning and judgment.”1
“He who dies in Jerusalem, is like one who dies in the heavens.”2
But, here’s Imru-ulqais!
He is passing by Jerusalem as he heads to Byzantium.
Before his feet touch the threshold, he reads:
To the blood shed on the shores of the Mediterranean
From the beginnings, a ravaged history.
To the earth’s history
A heavenly summation named Jerusalem.
But why are there only two kinds of people in it:
The dead who live in poverty,
And the living who live in graves?
Day and night wrestle,
each trying to choke the other in the name of Jerusalem.
Time made a documentary film of the battle.
But Imru-ulqais said, departing:
In the beginning was the word,
In the beginning of the word was blood.
A stage-play directed by the all-wise, almighty.
Imru-ulqais, have you tired of walking
these streets divided by the unknown?
How excellent they are at kidnapping?
How powerful their walls at intercepting people’s words?
Every time you try to embrace a woman, a guard asks you:
Do you have the heavens’ permission?
Indeed, all the fruits on these streets are bitter.
Still, you go on walking, more persistently
than a hungry male ant,
making of your steps strings for music that has yet to play,
edged by reeds of erects dreams that the eggs of doubt shun.
* * *
You suspect that your bed is another night altogether
and someone is whispering to you:
Night lies, as usual, even though
he is the sun’s most loyal friend.
You are used to starting from point zero by now
because you have caught the scent of eternities.
You grandmother, that Ukhazi3 sky, tucked coins into her sons’ pockets
which were nothing by dice,
and she demanded they spread them on the sands of the stars, if they
wanted to complete their dreams.
And according to her commands,
they did broadcast their odes on the sand
in blessing and celebration.
You are now under another sky.
Bleeding walls surround you. Heads that are almost
cut off speak without ceasing.
Have no fear, dear wind,
forests on fire hide behind the traps you have set.
And there are springs spilling blood
from the eye of the needle that the sky holds in her hand.
The words of swords and spears
and they prey on anyone who can see.
—Angels have preferred to become lovers where
the smoke of Arab musk is a space
for their banishment, somewhere between Hijaz and Jerusalem.
—Your sky is a linguistic etching.
Your earth is weighted with delusions.
Whenever a word heaves among the etchings,
the teeth of history rattle, and heads roll in all directions,
while the stars appear like bundles of straw.
—The history of a milk that escaped the bosoms of their mothers to feed the moon
and the stars.
—When the storm attacks, it has no weapon except our bodies. It fills our days with
black clouds that no light can read.
—This is how we make coffins before their time is due.
We anoint them with the perfume of pre-creation.
In their names, we slit the artery of the earth to feed
the veins of the unknown.
—History, read your horoscope, and you will see how
delusions are turned into towers of facts.
—The body of history surrenders on astrology’s bed.
Here it is
unbuttoning its clothes.

The book-length poem, Kunshertu al-Quds [Concerto for Jerusalem] (2013), is published by Dar Al-Saqi, Beirut. An English translation of the poem by Khaled Mattawa is forthcoming from Yale University Press in 2015.