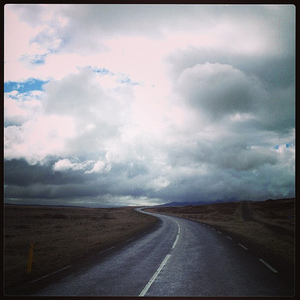 Meg Matich is the recipient of a 2015 PEN/Heim Translation Fund Grant for Cold Moons, a collection of sparse, minimalistic ecopoetry by Icelandic poet Magnús Sigurðsson that deals with nature’s resilience to the passage of time. Read Matich’s essay on translating Cold Moons here.

Flight of the dwarf wasp,

finally
captured
in a photograph.

After one million
millennia of steadily
evolving

The valley
is called Eternal Valley;

my house
on the riverbank,
Earth.

I have no claim
to either.

I watch
the seedling
grow

in the fertile fields.

Now the poems
seem to come
one after the other.

That can only mean one thing:

We are the thousand suns
we have forgotten.

to water
light
and soil.

I strip
every day,

a maple
stripping off
papery bark.

In the Apricot Orchard

Ten years have passed
since our
last meeting.

And now I see:
all the night’s darkness
cannot extinguish

the sparks of fireflies.

Evolution (1) was first published in Words Without Borders.

Meg Matich is a poet and translator, and a recent graduate of Columbia’s MFA program. Her translations have appeared in or are forthcoming from Exchanges, Words Without Borders, Absinthe, Asymptote, and others. She was a finalist for the 2015 ALTA fellowship, Iowa Review Poetry Prize, and others, and has received grants and fellowships from Columbia University, the DAAD, and the Banff Centre.