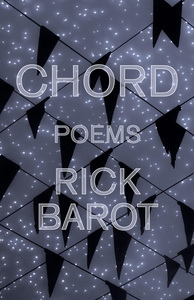 Rick Barot is the winner of the 2016 PEN Open Book Award for Chord. Barot’s complex, elegant, and observant poems confront the role of language in addressing the concerns of our world. Spanning a variety of subjects, this collection is intimate, musical, and thoughtful. The following are three poems from the collection.

It is not always joy
that is announced to you
in the ordinary light.

Not always a wing
or a flood of new knowledge

delivering its atoms of change
to your body.
Sometimes it is

a wound delivered,
just as plainly as in those
paintings, her head tilted

up or down, in an angle of
resignation and responsibility.

by what you have received,
the heart a putty-colored

folding chair knocked
to the ground.
And the room itself, emptied,

this is part of the recognition.
The room a wound,
the light a wing on the floor,

the atoms of dust
in the shaft. And the quiet,
that is grief’s appetite.

Chord that is your satin purple dress, love’s good synesthesia.

Chord that is your classroom’s chalked board, its elementary figures.

Chord that is letters, that is photo albums, that is rosaries, that is money.

Chord that is the lion-gold hills along the Central Valley, our I-5 songs.

Chord that is your young husband, outlived longer than he lived.

Chord that is a photograph of you among tulips, the field now no field.

Chord that is time, that is children, that is houses, that is countries.

Chord that is your name, conjugation for the sun and for consolation.

Chord that is your throat, its Sunday hymns unabashed, unstricken.