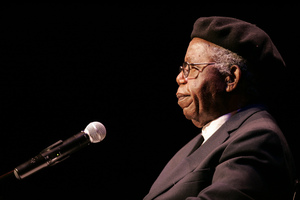 Today PEN America joins the international literary community in mourning the loss of Chinua Achebe, a major contributor not only to African literature but to world literature as well. A rare recording of Achebe reading from his debut novel, Things Fall Apart, can be found below.

Achebe was frequently on the minds of PEN and its writers: Toni Morrison read “English and the African Writer” at PEN’s 2008 Tribute to Achebe (the entire audio of which can be found here), and Colum McCann delivered one of our favorite tributes of the last ten years, complete with a reading of William Butler Yeats’s “The Second Coming,” from which Achebe famously took a line to title his landmarkdebut novel.