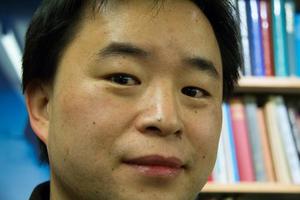 When we launched The PEN Report: Creativity and Constraint in Today’s China a couple of weeks ago on World Press Freedom Day, The Atlantic featured one of the jewels of the report, writer Murong Xuecun’s biting and incisive essay “Crappy Freedom.” The piece is vintage Murong, who has emerged over the last several years as one of China’s more exciting literary voices and also as one of the bluntest critics of his government’s gargantuan, and often petty and arbitrary, censorship regime.

Now that machinery has been turned on Murong, who reports in another scathing piece in the Guardian today that this past Saturday authorities simultaneously erased all of his popular microblog accounts, eradicating in a flash all traces of one of China’s most popular critical voices. As he reports in his essay,

I am a “big V” [verified user] on Weibo, possessing over 8.5m followers across the four web portals, and 3.96m in Sina alone. In a period of over three years, I had posted more than 1,900 Weibo messages totalling more than 200,000 words, each written with deliberation and care. In a split second, however, they were all brought to naught.

Murong speculates that the move may have been a response to his post criticizing a recently-leaked government directive on the “Seven Nos,” or seven ideas that it deems threatening; as Chris Buckley reported yesterday in the New York Times, that list includes media freedom and an independent judiciary. Murong writes that the day before his accounts were deleted,

[S]everal people confirmed a directive issued by a certain department of the government or the Communist party, which listed seven topics that are not supposed to be mentioned by university teachers: universal values, press freedom, civil society, civil rights, historic errors of the Communist party, the class of crony capitalists, and judicial independence. Soon, the Hong Kong newspaper Ta Kung Pao, known for its pro-Communist stance, ran a report on the same subject.

“The ‘seven no’s’ can actually be summed into one,” I wrote on my Weibo page, ” ‘Don’t be civil.’ ” Perhaps someone was offended by this sentence.

Alternatively, Murong suggests, his silencing may have come because he had spoken out about what in fact now appears to be a wave of such Internet bannings in recent weeks. As Murong reports,

Another possibility concerns the “He Bing incident.” He Bing is a professor at Chinese University of Political Science and Law, and has over 430,000 followers on Sina Weibo. According to an announcement issued by Xinhua on 10 May, he has been silenced by the State Internet Information Office for “purposely spreading rumours.” He wrote a statement responding to this accusation, arguing that the issuance of the punishment did not follow standard administrative procedure, and declaring that he was preparing to file a lawsuit. He asked me to help him retweet the statement. I tried five times, and saw the message censored each time. The next night, I posted a message on Weibo, asking the State Internet Information Office to answer the following questions: Who gives you the power to deprive citizens of their right to free speech? What are the relevant legal standards and procedures for identifying rumours? On what basis do you accuse He Bing of spreading rumours? Why do you repeatedly delete He’s statement? Why would you not allow him to defend himself?

“As one can imagine,” Murong records wryly, “the State Internet Information Office is not interested in answering my questions. In 20 minutes, all my Weibo accounts were deleted.”

True to the dynamic that is described in The PEN Report, crackdowns like the one that is now unfolding against popular microbloggers are increasingly met with defiance: to be silenced, as he has been, is to be “put to death,” microbloggers say; to register a new microblogging identity and resume posting is to be “reincarnated.”

Most Weibo users are familiar with the term “the Reincarnation party.” It has come to symbolise people’s resistance and struggle against censors. Every member of the party shares the same experience: being killed, and reincarnated; killed again, reincarnated again. Xiao Han, a teacher at Chinese University of Political Science and Law and a friend of mine, has reincarnated 212 times. Journalist Yang Haipeng started a game after many reincarnations by registering himself under the names of the 108 heroes in the novel Outlaws of the Marsh, one at a time. He started with Song Jiang, followed by Lu Junyi. Now he is Fei Xuan, hero No 47. The record-holder is a user named “Repair.” As of 13 May, she has reincarnated 418 times. If she is unable to use that name, she will become “Re-pair,” “Repare” or “ReIpair.”

Murong Xuecun’s Guardian piece in its entirety is a must read, not least for his description of his so-far unsuccessful attempt to be reincarnated since his accounts were erased over the weekend—and for its stirring conclusion. For those looking for inspiration in a world where the tools of suppression seem to multiply by the day, you can’t do much better than this:

A friend once asked me what it felt like to be silenced. “It’s as if you were chatting and laughing with friends in a brilliantly lit house, when you suddenly fell into a dark pit,” I told him. “You yell at the top of your lungs, but no one can hear you. You struggle to get out, but only sink deeper.” I also need to console those who love me, and let them know everything is fine. In this abyss, I am once again visited by the biting chill of uncertainty, of not knowing what will come next. I am not as prepared as I thought. I am still scared, but I will not stop struggling, because I believe my silence would only embolden those who are trampling on my rights, and will trample on the rights of others. I need to stand bold straight and tell those in the “relevant organs”: you can never take away my rights. This abyss, I believe, will not remain dark for ever. As long as I keep up my effort, I will eventually find a piece of flint and kindle a tiny spark to illuminate the square inch in front of my feet.