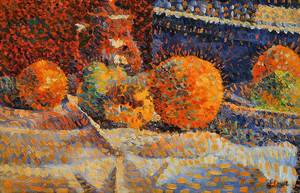 Sons and Lovers, the banned book I choose to celebrate, long ago inspired me to become a writer. (I won’t rehearse now the history of troubles that D. H. Lawrence’s novel has faced—from censors, prudes, paranoids—since its publication in 1913, around the time that Kandinsky invented abstract painting and Schoenberg invented atonal music; instead of carping about the ban, I’ll render homage to the book’s glories.) When, as a high school senior, I read Sons and Lovers for the first time, Lawrence’s portrayal of emotional conflict electrified me. His protagonist couldn’t separate attraction and repulsion. Ambivalence, I realized, wasn’t my personal problem; ambivalence, which bisected desire, forbade everyone from attaining a state of affective monochrome. Contradictory emotional hues might take part in a moment’s surge of wanting or not wanting; I might hunger for the very sensation (a torso, a bird-cry) that caused me to turn away in disgust. Sons and Lovers was the first work of literature I’d read that made ambivalence its central subject; for every passage that honored a sensation and portrayed its desirability, Lawrence wrote a contrary passage that retracted the desire and turned savoring into loathing. We could try to temper our ambivalence, but we couldn’t erase it; we might strive to behave decently toward other human beings, but we couldn’t cancel our tendency to make a mess of every situation.

This summer, prompted by discovering Sons and Lovers on a list of the one hundred most frequently banned works of literature (banned for honesty? for portraying pre-marital sex? for conflating flowers and genitals?), I decided to reread Lawrence’s novel, to see if it measured up to my own memory of its magnificence, and to see if it was as steamy as its opponents imagined. This time around, I paid less attention to its portrayal of sexuality, emotional ambivalence, and a son’s complicated love for his complicated mother; I found myself listening, instead, to Lawrence’s fastidious prose, which achieved economical exactitude. Like Kandinsky or Schoenberg, Lawrence experimented, in never lengthy sentences, with using words synesthetically as monads of color. His sentences collect firmly sounded pointillistic impulses, like tiny dabs of paint, or like a musical scale decomposed, its undifferentiated flow turned into discrete tones, each pitch a separate event, the notes sometimes combining into phrase-arcs but never losing their identity as solitary perches. I wish I could sing out for you every precisely gridded sentence in Lawrence’s novel; I’ll let one sample prove his optical rigor and his movement toward abstraction. “There was a yellow glow over the mowing-grass, and the sorrel-heads burned crimson. Gradually, as they walked along the high land, the gold in the west sank down to red, the red to crimson, and then the chill blue crept up against the glow.” Monosyllabic words—chill blue crept up—allow the different corners of the sentence to retain atomistic individuality. Chill remains aloof from blue; blue stands far from glow. One note—one lozenge of perceived color—retains its lonely location, meanwhile succumbing to a syntactic movement that brings us forward, syllable by syllable, as if our eyes were traveling methodically and without hurry toward a luminous closure that hangs on the sentence’s horizon. Lawrence doesn’t swirl words together in vague clouds of association; he lays out the molecules solemnly and with a reticulated fineness, as if tiny crenellations or furrows between words gave them traction. Lawrence happened to be a painter, as is the novel’s hero, Paul Morel; but even when Lawrence isn’t describing visual experience, the sentences obey this principle of gaunt, firm construction, a tone-row compactness that attests to Lawrence’s emotional acuity, his keen ear, and his modernist avoidance of ornament. Psychological nuance arises not from diagnosis or generalization, but from weighted syllables, which serve as containers for feelings sometimes the property of one character, sometimes the property of several, and sometimes the property of none: “He, in his semi-conscious sleep, was vaguely aware of the clatter of the iron on the iron-stand, of the faint thud, thud on the ironing-board.” Somnolence, too, Lawrence portrays with acoustic refinement and accuracy; “thud, thud” goes the iron, and we hear that repeated “thud” plunge to the heart of Paul’s reverie. To be “vaguely aware,” in Lawrence’s system, means also to be held within the clearly delineated grip of sonorous yet simple nouns, sleep and iron and iron-stand and clatter and ironing-board, as if his paint box only included colors of pungent legibility and worth.

In 1975, Sons and Lovers meant to me the Gethsemane of emotional ambivalence—erotic yet ascetic, the stakes high as scripture, translated into genital dialect. Now, nearly forty years later, Sons and Lovers seems the transcript of Lawrence’s concentrated experiment—a newly invented system of equivalences between emotion and syllable. He has peers in this revolutionary endeavor, including writers he’d never met and maybe never read, such as the Austrian poet Georg Trakl, who died in 1914, and whose painterly poems—expressionist? symbolist?—accrete color-words bit by bit to form associative ladders, rung after rung of terms lifted from a private lexicon of blues and golds and greys. Indeed, Lawrence belongs to a guild in which Paul Klee and H.D., among others, paid dues. And yet I want to grant Lawrence the singularity of his achievement; with an unusual simplicity, smudged, as if with coal dust, he made unmatched discoveries about prose’s capacity to render emotion’s coloristic flux—to render it without destroying the solemn integrity of each word as a heard word, an audible incantation with the power to conjure but not the power to soothe. His words, not medicinal, might be unsettling, but to ban Sons and Lovers is to ban a cabbage-rose and all the emotional richness that a cabbage-rose, carefully placed, accurately heard, can summon.