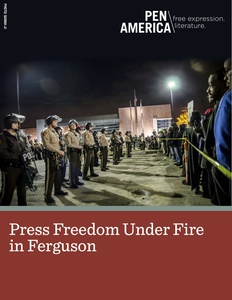 On August 13, 2014, Lowery and Reilly were working in a McDonald’s near the scene of protests in Ferguson when police officers entered the restaurant and asked to see press credentials. They returned shortly afterwards and ordered them to leave. Lowery and Reilly attempted to comply, but were nonetheless arrested. The incident received widespread media attention, and drew sharp criticism of local police for their treatment of Lowery and Reilly, as well as many other journalists engaged in legitimate newsgathering activity. PEN’s report Press Freedom Under Fire in Ferguson documented 52 alleged incidents of press freedom violations committed by St. Louis-area police during the 2014 protests, including Lowery and Reilly’s arrests. The charges against the two carry a punishment of up to one year in jail and a fine of $1,000.

“Bringing charges against journalists who were wrongly arrested while doing their jobs is yet another indication of St. Louis authorities’ disregard for First Amendment freedoms,” said Katy Glenn Bass, deputy director of free expression programs at PEN. “And bringing the charges now, at a time when crowds are once again gathered in Ferguson in protest, seems intended to send a message to journalists and protesters that their rights will not be respected either. These charges should be dropped immediately.”

UPDATE: This post has been updated to include news of the charges against Ryan Reilly.