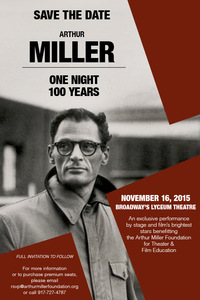 In celebration of the 100th anniversary of Arthur Miller’s birth on October 17, 1915, a variety of events will be held in New York, Michigan, and Spain to honor the legacy of the noted playright and former president of PEN International. At PEN American Center, our annual Arthur Miller Freedom to Write Lecture is named after the fierce defender of the freedom of expression. It is the culminating event of the week-long PEN World Voices Festival of International Literature and features leading voices addressing critical free expression challenges.

Below are some events recommended by the Arthur Miller Foundation to celebrate Miller’s centenary.

The Arthur Miller Centennial / Twelfth International Arthur Miller Conference: The International Arthur Miller Conference returns to Brooklyn Heights, the neighborhood where Miller lived in the 1940s and ’50s. Distinguished American drama critic Christopher Bigsby will deliver the keynote address; Enoch Brater, the Kenneth T. Rowe Collegiate Professor of Dramatic Literature at the University of Michigan, will deliver the concluding remarks. The conference will include panels comprised of playwrights, theatre critics, actors, and directors. There will be staged readings and performances of Miller’s work, culminating in the world premiere staged reading of a new production of A View From the Bridge. This Muslim/Syrian version will be directed by Brooke Ciardelli, the founding artistic director of Northern Stage in Vermont. St. Francis College, Brooklyn: October 16–18.