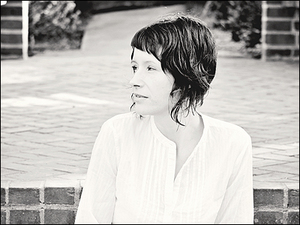 With PEN’s Poetry Relay, a series of readings and conversations, we hope to trace the topography of influence that connects contemporary poets to their peers and predecessors. The relay features a reading by each poet and a conversation that covers the poet’s inspiration and influences, followed by a hand-off to a peer.

In this week’s relay, Adam Day passes the baton to Catherine Wagner, author of Nervous Device (2012), My New Job (2009), Macular Hole (2004), and Miss America (2001). Listen to Wagner read her poems “Do Fairly Pleasant Thing,” “The Ugly Neck, or Making Bank,” and “Arrived Detaching Toward the Union.” below.

I would not see for the trees.

Unscratched by thistles
I stroll a wood-chip road
Down meadow.

A rush of air past branches
Wind on skin
Unsimultaneous.

The road is to my eye

Unsightly and yet
It shares cause with the meadow
That is a place of forced permission.

The Ugly Neck,
or Making Bank

Robins and cardinals blurt between furrows of storm.
A way energy has of being. It can caress itself.