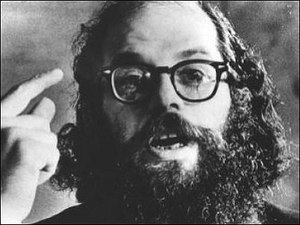 “My books piled up before me for my use / waiting in space where I placed them, they haven’t disappeared, time’s left its remnants and qualities for me to use—my words piled up, my texts, my manuscripts, my loves.”

Staunch critic of militarism, materialism, and sexual repression, Allen Ginsberg was a poetic icon of the 1950s Beat Generation. His most famous poem, “Howl,” which firmly denounces capitalism and conformity in American society, has become one of the best known works of the era.

In 1957, “Howl” became the subject of an obscenity trial in San Francisco for being “filthy, vulgar, obscene, and disgusting language.” The poem’s depiction of homosexual sex during a time when sodomy laws made homosexual acts a crime in America added to the poem’s controversy. In the end, Judge Calyton W. Horn ruled “Howl” as not obscene, with the comments, “Would there be any freedom of press or speech if one must reduce his vocabulary to vapid innocuous euphemisms?” Despite this ruling, Ginsberg would continue to face obscenity charges and book banning for decades to come.

Ginsberg was also known to have openly praised past Communist leaders and let known his connection to Communism during the Red Scare and McCarthyism. Alongside Salman Rushdie, Saul Bellow, and several others, Ginsberg discussed these issues at the 48th Congress of International PEN in 1986.

As a political activist, Ginsberg took part in several peaceful protests, against the Vietnam War, drugs, and for several other causes. He was also “tirelessly persistent in protesting censorship, imperial politics, and persecutions of the powerless,” as described by literary critic Helen Vendler.