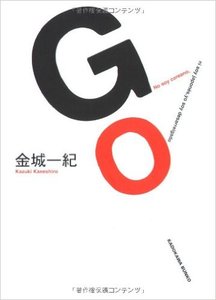 Takami Nieda is the recipient of a 2015 PEN/Heim Translation Fund Grant for her translation of GO by Kazuki Kaneshiro, a coming-of-age novel that won Japan’s Naoki Prize and depicts the life of an ethnic Korean student living in Japan. Read an excerpt of the translation here.

I first read the coming-of-age novel GO not too long after its publication in 2000, and instantly connected with its protagonist Sugihara. As the only Zainichi Korean—an ethnic Korean long-term permanent resident or citizen of Japan—in his Japanese high school, Sugihara has always had to defend himself against all kinds of bullies, and has a stellar 23‑0 fight record that would make his father, a former professional boxer, proud. His father has taught him—at times through example and other times more cryptically—to stand tall against discrimination, and that he can choose to be anything he desires. But nothing can prepare Sugihara for the heartache he feels when he falls hopelessly in love with a girl named Sakurai. With every passing day that they spend together, the pressure mounts for Sugihara to tell her that he is not Japanese, as his name might indicate.

The way Sugihara searches for and draws strength from the teachings of Malcolm X, the lyrics of Springsteen, and Hendrix’s iconoclasm is deeply touching. He is also a movie lover, often making references to The 400 Blows, The Age of Innocence, and Bruce Lee; he is a student of rakugo, the ancient Japanese art of storytelling. Sugihara’s influences are as diverse and inclusive as the society he envisions for Japan. Above all, Sugihara is never a victim. He is willing to drop-kick discrimination and face adversity head on. His is the voice—angry and unapologetically sarcastic—that I wanted to hear; his is the story I wanted to read growing up Japanese-American in a very non-Japanese-American neighborhood in New Jersey. The protagonists in the few so-called “Asian” books that I’d encountered always seemed to me so well-mannered, so restrained. Although Sugihara often confronts the world with his fists and fierce sarcasm, there is always a hint of vulnerability and heartbreak in his voice. Capturing that hurt has been the challenge of translating this novel.

In the past, Kaneshiro has resisted the category of “Zainichi writer” and insists, like many young Zainichi of his generation, that his heritage is but a small part, and not a defining mark, of his identity. And yet, issues of identity make subtle appearances in his later works, most notably in his follow-up novel Fly Daddy Fly in the character of Park, a tough-as-nails Korean teen, who trains a Japanese salaryman to fight his daughter’s harasser. Since GO’s publication, Kaneshiro has gone on to establish himself as a screen and television writer of high-concept thrillers. Whether the author returns to his earlier exploration of the Zainichi experience or not, as I sincerely hope he will, readers’ discovery of Kaneshiro’s works must begin with this breakthrough novel.

Takami Nieda has translated into English works by authors such as Asa Nonami, Sayuri Ueda, Hiroshi Yamamoto, Issui Ogawa, Hideyuki Kikuchi, and most recently “Mummy” by Banana Yoshimoto in the anthology The Book of Tokyo: A City in Short Fiction. Her translations have also appeared in Words Without Borders and Asymptote. She is an assistant professor of English and translation at Sophia University in Tokyo.

Kazuki Kaneshiro, a Japanese citizen of Korean ethnicity, made his literary debut with Revolution No. 3 in 1998, which won the Shosetsu Gendai Prize for New Writers. In 2000, Kaneshiro won the Naoki Prize for GO, announcing the emergence of a new voice daring to tackle heretofore largely unspoken issues of ethnicity and discrimination in Japanese society. The novel’s popular film adaptation in 2002 went on to win major awards in Japan. Many of his works have been made into films or manga, and Kaneshiro has been adept at working synergistically across multiple formats and genres, writing the original concept and scripts for the action thriller series SP and Border.