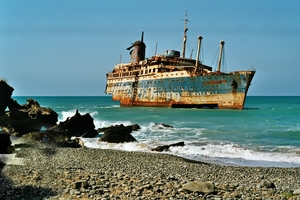 No one can come to any agreement on the reason why this pirate was given the name of a young goat. The document by which William III, King of England, invested him with his commission aboard the Adventure Galley, in 1695, begins with these words: “To our trusty and well beloved Capt. William Kidd, commander, etc. Greetings.” And yet it is certain that from that day forward, it was a nom de guerre. Some say that he had the custom, being an elegant and refined man, of wearing delicate kidskin gloves lined with Flanders lace, both during battle and while on maneuvers; others would assure you that during the foulest of his blood-baths, he would cry out, “Good thing I’m as gentle and good as a new-born goat!” Still others claim that he locked away the gold and jewels in extremely supple bags made from the skin of young goats, and that the habit came about the day he pillaged a vessel laden with quicksilver, with which he filled a thousand leather sacks that are still to this day buried on the slope of a little hill on the Isle of Barbados. Suffice it to say that his black silk flag was embroidered with a skull and crossbones as well as a young goat’s head, and his seal was engraved with the same. Those who seek the numerous treasures he hid on the coasts of both Asia and the Americas have been said to take a small black goat to walk before them, which is supposed to bleat at the spot where the Captain buried his booty; but none have succeeded. Blackbeard himself, who learned his trade from a former crewman of Kidd’s named Gabriel Loff, found nothing in the dunes upon which Fort Providence lies today, with the exception of scattered drops of quicksilver which had seeped through the sand. And all of these excavations are pointless, as Captain Kidd himself declared that his hiding places would remain undiscovered in perpetuity thanks to “the man with the bloody bailer.” Kidd, in fact, would be haunted by this man his entire life, and Kidd’s treasures have been haunted and protected by him ever since his death.

Lord Bellomont, the governor of Barbados, frustrated by the constant plundering of the pirates in the West Indies, equipped the galley Adventure, and obtained from the king the commission of commander for Captain Kidd. Kidd had long been jealous of the legendary pirates of Ireland, who pillaged the many convoys; he promised Lord Bellomont that he would capture the cutter and bring its captain and his companions back to be executed. The Adventure was armed with thirty cannons and a hundred and fifty men. First, Kidd landed on Madeira, and there he supplied them with wine; then Bonavista, to bring salt on board; finally, Santiago, where he completed outfitting the ship. And from there, he set sail for the entrance to the Red Sea, where, in the Persian Gulf, there lay a small island known as the Key of Bab.

It was there that Captain Kidd gathered together his companions and had them hoist the black flag with its skull and crossbones. They all swore utter obedience to the rules of piracy, with the blade of an axe as their witness. Each man had the right to vote, and an equal share of the fresh provisions and strong liquor. Games of cards and dice were forbidden. The lamps and candles were to be extinguished at eight o’clock in the evening. If a man wanted to drink later at night, he was to drink on deck, under the open sky. The company was to receive neither women nor young boys. Anyone to bring one onto the ship by way of subterfuge would be put to death. The cannons, pistols, and cutlasses were to be maintained and polished. Any quarrel would be resolved ashore, with sabers and pistols. The captain and the quartermaster had the right to two shares of loot; the sailing master, bosun and gunner to one and a half; the other officers to one and a quarter. The musicians would rest on the Sabbath.

The first ship they encountered was Dutch, under the command of Schipper Mitchel. Kidd hoisted the French flag and gave chase. The vessel immediately showed French colors as well, in response to which the pirate hailed them in French. Schipper had a Frenchman aboard, who responded. Kidd asked him if he was in possession of a passport. The Frenchman said he was, to which Kidd replied, “Well then, by God, by virtue of your passport, I’ll treat you as Captain of your ship.” And straight away, he had him hanged from the yardarm. Then he had the Dutchmen come over one at a time. He interrogated them, and feigning not to understand any Dutch, his order for each prisoner was, “In French! The plank!” A plank was fastened to the jib-boom. The Dutch all ran naked along it, the tip of the bosun’s cutlass right behind them, and leapt into the sea.

At that moment, Captain Kidd’s gunner, a man named Moore, raised his voice. “Captain,” he cried out, “why are you killing all of these men?” Moore was drunk. The Captain turned around, and taking up a bailing bucket, brought it down on the man’s head. Moore fell, his head split open. Captain Kidd had the bailer washed, some hair still clinging to it along with the coagulated blood. No man of the crew would ever again touch that swab. The bailer was left to hang from the deck rail.

From that day on, Captain Kidd was haunted by the bailer man. When he took the Moorish vessel Quedah, crewed by Hindus and Armenians and carrying ten thousand pounds in gold, during the sharing of the loot the bloody bailer man was sitting on top of the gold ducats. Kidd saw him clearly and swore. He went down into his cabin and polished off a cup of bamboo liquor. Then, having returned to the deck, he had the old bailer thrown into the sea. During the boarding of the rich merchant vessel Mocco, they could not decide how to measure out the Captain’s share of gold dust. “A bailer’s full,” said a voice behind Kidd’s shoulder. He sliced through thin air with his cutlass and wiped his lips, which were flecked with foam. Then he had the Armenians hung. The men of the crew seemed not to have heard a thing. When Kidd attacked the Hirondelle, he stretched out on his bunk after the sharing out. When he awoke, he found himself drenched in sweat, and called a seaman to ask for something with which to wash himself. The man brought him water in a tin basin. Kidd stared at him unblinkingly and shouted, “Is this the manner in which you conduct yourself as a gentleman of fortune? Wretch! And he brings me a bailer filled with blood!” The seaman fled. Kidd had him put ashore, and left him marooned with nothing but a gun, a bottle of gunpowder and another of water. He had no other reason for burying his booty in the sand of such far-off, solitary locations, other than a belief that each night, the murdered gunner came to empty the gold out of the hold with his bailer so as to throw the riches into the sea.

Kidd was captured off the coast of New York. Lord Bellomont sent him to London. He was condemned to the gallows. They hung him on Execution Dock, in his red coat and gloves. At the very moment the executioner slid the black hood down over his eyes, Captain Kidd struggled and cried out, “Good Lord! I knew he’d put his bailer on my head!” The blackened corpse remained hanging in its chains for more than twenty years.

Marcel Schwob was a Jewish French symbolist writer best known for his short stories and his literary influence. In addition to over a hundred short stories, he wrote journalistic articles, essays, biographies, literary reviews, analysis, translations, and plays. His collections include Cœur double (Double Heart), Vies Imaginaires (Imaginary Lives), and many more.

Chris Clarke was born and raised in Western Canada. His previous translations include work by Nobel Prize winner Patrick Modiano (NYRB Classics), Oulipo members Raymond Queneau (New Directions) and Olivier Salon (Words without Borders), and most recently, Pierre Mac Orlan (Wakefield Press). Chris is a member of the Outranspo, a doctoral candidate at the CUNY Graduate Center, and teaches French at Brooklyn College.

Imaginary Lives will be published by Wakefield Press in 2017.